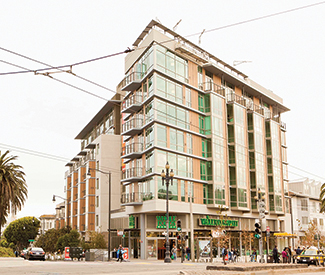 With the clink of champagne glasses, kudos to the development team and its community partners, and the cutting of a red ribbon, the new housing development at 38 Dolores St. had its grand opening celebration on Nov. 14, a couple weeks after the Whole Foods on its ground floor opened its doors to Market Street.

In many ways, 38 Dolores is pretty typical of the new housing opening in this part of town these days. It took seven years to complete the project, “on time and under budget in a way this community can be proud of,” developer Dan Safier of The Prado Group told the assembled crowd.

That process included countless meetings with various community groups, who successfully pushed for progressive features that include some key pedestrian safety improvements and limiting the number of parking spaces to just one spot for every two units.

“It was an amazing example of a developer working closely with the various neighborhood associations,” area Sup. Scott Wiener told the well-dressed crowd at the event, a sentiment also voiced by his predecessor, Bevan Dufty, who said, “They’ve been the gold star as far as listening to people.”

But not everyone agrees with that praise. Peter Cohen, a housing activist who also works for the San Francisco Council of Community Housing Organizations, said Safier broke longtime assurances that he would satisfy his affordable housing obligations by building below-market-rate (BMR) units on site, rather than just paying an “in-lieu” fee to the city, two options under Inclusionary Housing Ordinance.

“They basically did a bait and switch. It was a real bullshit move,” Cohen told the Guardian, noting how desperate the city is for more affordable housing now. “The bottom line is they promised to do affordable housing on site and they didn’t do it.”

“There are so many nuances to how affordable housing works,” Safier told us, vaguely explaining why he couldn’t do on-site BMR units, including the demands of project funders. He worked with the city on doing a land dedication for off-site affordable housing, but the Mayor’s Office of Housing was resistant, and it would have required a change in city codes to do in this part of town.

“They wanted to develop faster than we had to capacity to develop,” MOH Director Olson Lee told the Guardian, explaining that his office was dealing with transitioning affordable housing projects under the old Redevelopment Agency and it didn’t have the capacity to help Safier build the BMR units now. Instead, it accepted a check for about $5 million.

“We felt there should be more options for developers,” Safier said. “But the reality is the city needs the fees.”

Yes, over the long haul, the city does need those fees to build more BMR units, which require big public subsidies to build in San Francisco. But those will take many years and much effort to build. Lee said the $37 million now in the city’s Affordable Housing Trust Fund will eventually translate into 185 BMR units.

“That’s why we want the units on site,” Cohen said, “because the clearest path is to build the damn units in your building.”

By time the party started at 38 Dolores, 40 of its 81 units had already been rented, and the developers expected even more to be rented out by the end of the party, after attendees had toured the open units sipping free champagne or cocktails.

“If you’ve brought your checkbook, you can even rent a unit,” Safier told the crowd.

Prices ranged from $2,950 per month for one of a half-dozen 505-square-foot studio apartments to $4,395 for the two-bedroom, two-bath, 1,099-square-foot units that the event was really pushing up to $8,100 for a few three-bedroom apartments with the balcony and killer views on the seventh floor.

Compare those rents to San Francisco’s median rent of nearly $1,500, the highest in the nation, according to a recent US Census report, which also noted that occupants in 38 percent of rental units in the city pay more than 35 percent of their income on rent. And then you get a pretty good idea how San Francisco is changing.

Thousands of newly constructed housing units are now coming online in San Francisco, spurred by the city’s hot housing market, pent-up demand and capital following the 2008 financial crisis, and approval of city plans that regulate development by neighborhood, such as the Market and Octavia Neighborhood Plan, which has unleashed a flood of development along mid- and upper-Market Street.

The good news is apartments are finally being built in a city where nearly two-thirds of residents rent — even in projects like 38 Dolores that are permitted as condos — but the bad news is that they’re really expensive and the city isn’t building anywhere near enough affordable units to address demand by current residents. And most developers are opting to “fee out” rather than build BMR units, meaning it will take several years to address this growing economic imbalance.

The trend in what’s being built in San Francisco and what those units are going for only increases the pressure on tenants in rent-controlled apartments, who are now being displaced at rates not seen since the last dot-com bubble, both through evictions and buy-outs. Contrary to the supply-and-demand arguments made by pro-development cheerleaders, there’s no evidence that the housing supply now being built is doing anything to help most San Franciscans.

“Trickle down theory is going to fuck San Francisco, it’s not going to help it,” Cohen said.

San Francisco’s Housing Element, a study of housing needs mandated by state law to ensure that cities are addressing their affordable housing obligations, called for the city to build 31,193 housing units from 2007-2014. Partially as a result of the 2008 financial meltdown, San Francisco fell far short of that goal, with just 11,130 units getting permitted, most of those market-rate units.

So it isn’t that San Francisco is facing a “housing crisis,” as Housing Action Coalition and others often proclaim, it’s that the city is facing an affordable housing crisis driven by not building enough below-market-rate housing and allowing real estate speculators to cannibalize the city’s rent-controlled housing.

Even though voters last year approved Prop. C, creating the Affordable Housing Trust Fund to address the real crisis, it won’t generate nearly enough money to meet the long-term need. And in the short-term, it actually reduced the number of on-site BMR units that developers must build, from 15 percent to 12 percent.

“The reason for changing the inclusionary to 12 percent was to incentivize the on-site,” MOH’s Lee told us, although he admitted that it had limited success so far.

That’s not to say there aren’t any BMR units going up.

The Mayor’s Office says there are 6,168 housing units now under construction in the city, and 1,182 of those are affordable housing. Most of those are in projects that were required to do so because they got a gift of public land, including Lennar Urban’s housing development at Hunters Point Shipyard and the housing development that’s part of the Transbay Terminal rebuild in SoMa, where the Block 6 project starting next year that will have 70 BMR units out of 479 total.

Other developers were encouraged by the change in Prop. C, including the massive, 754-unit NEMA apartment complex on Market Street next to the Twitter headquarters, which opted to do the 12 percent BMR on-site rather than 17 percent off-site or the pay of an in-lieu fees that roughly equivalent to 20 percent. Trinity Housing’s huge project at 1167 Market will also have 232 BMR units out of 1,900 units total.

“Getting on-site inclusionary has lots of benefits,” Lee said. “One, we aren’t doing it. Two, it gets done faster. And three, we get a better mix around the city.”

While Wiener told us “we need all sorts of different housing,” he also said that “we need to do more to have on-site affordable units.”

But Cohen said the city isn’t doing nearly enough to encourage affordable housing construction, particularly giving how much market-rate housing is being built, which is gentrifying the city and hurting its diversity. He says MOH should increase the in-lieu fees, which are based on construction costs and not what the red-hot market is actually paying for units right now.

“The opportunity cost is far higher to do the unit on site,” Cohen said. “The fee is too cheap.”

So for now, Cohen works with neighborhood associations and groups such as the AIDS Housing Alliance and the Milk Club to put pressure on developers to do on-site affordable housing, as they’ve recently been doing to the Texas-based Greystar, which is proposing a 90-unit housing project at on Market at Sanchez.

Activists have pushed and pushed, and they finally felt like they got a commitment from Greystar at the Nov. 11 meeting of the Duboce Triangle Neighbors Association, which is spearheading the effort. But when the Guardian asked the company detailed questions about the issue and its commitment, we got back this vague statement from Randy Ackerman, Senior Director of Development: “We recently met with Duboce Triangle Neighbors Association and had a good discussion, where we received a lot of helpful feedback on the BMR units and the overall project. We plan to incorporate their feedback as we finalize our plans with city staff.”

Cohen said that’s typical of developers these days. “This is the economic reality, is it’s a place to make a lot of money off of real estate,” Cohen said. “They can very easily play the community like a fiddle, so I’m hoping I can help the Upper Market community beat Greystar.”

Safier said he doesn’t think it’s fair or helpful to demonize developers. “I’m not one of those evil developers,” Safier said, who criticizes the rich-vs.-poor political dynamics in the city. “I don’t think that tug and pull of this city is very productive.”

But Cohen said activists need to be vigilant to protect the character of the city in the face of growing profit motives. “It’s 24/7 and it just wears people down, and we have to have wins along the way,” Cohen said, noting the importance of defeating the 8 Washington project in the last election. “We have to be very loud about how difficult it is to maintain this city’s diversity.”