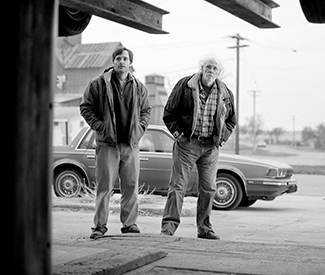 FILM Alexander Payne may be unique at this point in that he’s in a position — which, of course, could easily be changed by a flop or two — of being able to make nothing but small, human, and humorous films with major-studio money on his own terms (re: casting and final cut). As he’s said, in a better world this would be the norm rather than a singular achievement. It’s hazardous to make too much of a movie like Nebraska, because it is small — despite the wide Great Plains landscapes shot in a wide screen format — and shouldn’t be entered into with overinflated or otherwise wrong-headed expectations.

Still, a certain gratitude is called for. As usual, most of the year’s better films have been ones (too indie, too foreign) that won’t get the big drumbeat of awards-consideration thumping. And notably this year, most of the ones that will have been American movies made by foreign directors (i.e. Gravity, Dallas Buyers Club, 12 Years a Slave, Prisoners, etc.) Nebraska is, finally, a win by the home team.

It is also the first time Payne and his writing partner Jim Taylor weren’t involved in the script, and the first one since their 1996 Citizen Ruth that isn’t based on someone else’s novel. (Hitherto little-known Bob Nelson’s original screenplay apparently first came to Payne’s notice a decade ago, but got put off in favor of other projects.) It could easily have been a novel, though, as the things it does very well (internal thought, sense of place, character nuance) and the things it doesn’t much bother with (plot, action, dialogue) are more in line with literary fiction than commercial cinema.

Elderly Woody T. Grant (Bruce Dern) keeps being found grimly trudging through snow and whatnot on the outskirts of Billings, Mont., bound on foot (he’s no longer allowed to drive) to Lincoln, Neb., 900 miles away. Brain no doubt fuzzed by age, not to mention decades of drinking and tuning out the Mrs. (June Squibb as Kate, who in a moment of restraint greets his latest forcible return with “You dumb cluck!”), he’s convinced he needs to collect the million dollars waiting for him there. After all, he got a notice he’d won that amount in the mail. Never mind that it was just some Publishers Clearing House-type flier in fact promising nothing while attempting to sell magazine subscriptions. Woody didn’t read the fine print, and won’t be dissuaded. Something bigger than reality — or senility, even — is compelling him to make this trek. Finally, long-suffering younger son David (Will Forte), a stereo salesman whose girlfriend of two years just moved out, agrees to drive him in order to simply put the matter to rest. None of this will be particularly easy or pleasant, even if David is used to dad being problematic (or as Bob Odenkirk as older brother Ross puts it, “[He] never gave a shit about us”). Perhaps selectively deaf, Woody is no conversationalist, and claims that he’s sobered up are quickly dashed when he stumbles into their first-night motel room and bashes his head in the dark, requiring stitches. This fool’s mission acquires a whole extended family-full of other fools when father and son detour to the former’s podunk farming hometown.

There, a slew of Grants — the men all close-mouthed, the women all gabby — prove eager to believe Woody has struck gold, coming up with variably imaginary reasons why they should share in his newfound wealth. Likewise greeting this reunion with eyes full of dollar signs is Ed Pegram (Stacy Keach), a former business partner who by Woody’s reckoning has actually owed him money for 40-odd years.

Nebraska has no moments so funny or dramatic they’d look outstanding in excerpt; low-key as they were, 2009’s Sideways and 2011’s The Descendants had bigger set pieces and narrative stakes. But like those movies, this one just ambles along until you realize you’re completely hooked, all positive emotional responses on full alert. There are minor things to quibble about (mother Kate could be less of a shrew — it’s always a bit bothersome when the only significant female role in a movie evokes the “b” word), but so much that’s so deeply satisfying you hardly want to get out of your seat at the end.

Having apparently considered and bypassed bigger names (like Jack Nicholson, who for my money was too snarky — too Jack Nicholson — for 2002’s About Schmidt), Payne has a perfect cast, from 1970s almost-stars Dern and Keach to pliant-faced comedians playing straight Forte and Odenkirk. Forte (who also does good dramatic work in another upcoming seriocomedy, the Irish Run & Jump) in particular does the kind of ballasting act that attracts little attention to itself but perfectly harmonizes with other actors’ higher notes. We can feel how David has probably always undervalued himself, as well as how his wishing the people around him were kinder just might, eventually, make them so.

It’s a great pleasure just to watch the timeless flat vistas — timeless because these characters stayed behind in towns everybody else has been leaving for decades — of Phedon Papamichael’s photography, which recalls other great black and white rural movies of the color era like Hud (1963) and Paper Moon (1973). Nor should anyone overlook the soundtrack by Mark Orton of SF’s own Tin Hat, whose other members also contributed to an acoustic score that at an unusual moment of high-profile movies dominated by American roots music — neotraditionalist 1960s folk in Inside Llewyn Davis, bluegrass in the Belgian Broken Circle Breakdown — feels at once the most modest, effective, and emotionally authentic derivation of the lot.