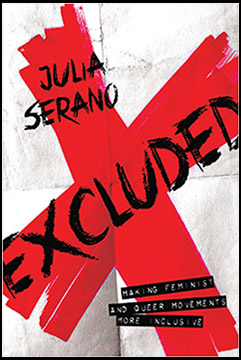 When we talk about feminist and queer exclusion, we aren’t just dealing with gendered pay gaps and marriage rights. In her new book Excluded: Making Feminist and Queer Movements More Inclusive, Oakland-based author and activist Julia Serano delves into the types of exclusion that she and many others have faced within the very spaces that are supposed to make us feel safe and supported.

Often in “LGBT” activism, it feels like the “B” and the “T” are just for show. Serano, a bisexual femme-tomboy transsexual woman, challenges preconceived notions and debunks myths about gender and sexual identities that our own queer and feminist movements often don’t appear to deem worthy of fighting for. Utilizing her experience as an activist, and often sharing personal accounts of exclusion from queer and women’s spaces, she encourages us to reevaluate some of the mantras of our activism.

“People tend to like memes and sound-bites because they make things sound simple and straightforward,” explained Serano. “This is certainly true within certain queer and feminist settings, where people often say things like ‘bisexuals reinforce the gender binary,’ or ‘all gender is performance,’ or ‘gender is just a construct.’ Sometimes people accept these memes without ever investigating them or fully thinking them through. So I tried to more thoroughly consider these ideas in the book — to point out how they are flawed or over-simplified.”

Excluded is a great read for both the most enthusiastic advocates for queer and feminist causes and anyone making their first foray into this type of activism. Often, material discussing issues of gender, sex, and sexuality are dense and full of jargon that makes it inaccessible to wider audiences.

“When I first became involved in feminism and queer activism, people often suggested that I read Judith Butler, Michel Foucault, and other academic writers on these subjects,” said Serano. “To be honest, I found such books to be impenetrable at first, mostly because they were constantly referencing other theorists and concepts that I was not aware of at the time. Nowadays, I can read their works with no problem. But there was a steep learning curve for me to be able to fully understand what they were trying to communicate.”

That’s not to say that she has anything against academics – after all, she is one herself. But because gender, sexuality, sexism, and marginalization affect everyone, she writes on these topics in a way that is accessible, rather than for a strictly academic audience. As a women and gender studies minor myself, I found this refreshing. Given a dense text, I might only come away with a few of these sound-bites Serano speaks of. And when you’ve spent semesters reading about these concepts and writing papers on them, beginning to unlearn them can be startling.

“If one more person tells me that ‘all gender is performance,’ I think I am going to strangle them,” Serano writes at the beginning of “Performance Piece” on page 105. If you only have a minute to flip through Excluded, spend it reading this piece, which was originally written for Fresh Meat, and became a catalyst for writing this book.

I first heard “Performance Piece” late last year when Serano did a reading at the Women’s Building, and the last words of it echoed through my head long after I left that night: “…my gender is a work of non-fiction.” It’s a reminder that when we dismiss gender as “just” anything – just performance, just socially constructed, just biological – we are oversimplifying a something complex and dismissing the person in favor of a concept. In order to truly advocate for queer rights, we must think more critically about even those ideas that queer movements treat as gospel.

“At the end of Excluded, I discuss working to foster intentionally intersectional movements that work to challenge sexism and marginalization more generally rather than favoring the issues faced by people of particular identities, bodies, genders, or sexualities,” said Serano. “Admittedly, this takes us out of our comfort zone and forces us to listen as well as speak, and to acknowledge other people’s differences and needs in addition to our own. But it has the advantage of creating broader and more powerful coalitions.”