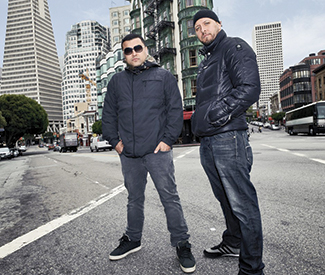 When the last Latyrx album, The Album, came out in August 1997, hip-hop was still trying to figure out its footing in a post-Biggie and Tupac world. The duo, made up of East Bay rappers Lyrics Born and Lateef the Truthspeaker, was one of the first conscious acts to make waves in that world before the actual subgenre of conscious or progressive hip-hop solidified.

But 16 years is almost half the lifespan of hip-hop and every cultural aspect associated with it. Countless micro-genres, fads, and rappers have emerged, disappeared, and assumed their position in the annals of style during the years after The Album and before Latyrx’s follow-up. Though the game has changed between the last time they collaborated and the release of 2013 full-length The Second Album (Latyramid), Lyrics Born and Lateef have still been putting work in the hip-hop industrial complex. Combined, they’ve put out more than a couple dozen solo albums, remix records, EPs, live albums, and mixtapes.

So why get the band back together? Lyrics Born puts it simply “[The Album] was such a milestone in our lives and careers. It was something we always planned to revisit but never had the opportunity to do so. It was definitely one of the top five questions I was always asked by fans. ‘When are you guys gonna do the next Latyrx album?’ It was just sort of time.” A second Latyrx album was announced on Lyrics Born’s website back in early 2007, but there was little movement until a few years later. The duo realized it better finally get cracking on the follow-up record when it was invited to do a show in 2010 with local jazz maestro Adam Theis of the Jazz Mafia group at the Mezzanine — and witnessed the immensely warm reaction to its set the following year at Outside Lands. Following those two performances, it was apparent that another Latyrx record needed to happen: “The window was right, so we got in the studio” says Lateef.

The most striking element of The Second Album is the feeling that each track comes from a different album. “It’s Time” features Zion I incorporating whizzing Transformers-like synths. “Gorgeous Spirits” is a booty-shaking clubbanger. The two tracks featuring tUnE-yArDs’ Merrill Garbus — “Watershed Moment” (also featuring longtime collaborater Blackalicious’ Gift of Gab) and “Deliberate Gibberish” — each shine in uniquely differing ways. “Deliberate Gibberish” sounds like it was culled from a fast-paced spoken word album and “Watershed Moment” percolates with a bouncy and eccentric flow. “There’s really no reason why a song like [‘Deliberate Gibberish’] should exist. It’s like the anti-song, the anti-hip-hop song in the sense that there’s no drums, it’s just Merrill from tUnE-yArDs doing these weird voices in the background,” says Lyrics Born, on working with the indie-art pop crooner.

The seemingly out-of-nowhere appearances of Garbus on the LP is due to an artist retreat in New Orleans. The conference put on by the Air Traffic Control (ATC) organization (which put on the Tibetan Freedom Concert series) is described by Lyrics Born as “an effort to coordinate artist with nonprofits.”

“We were there looking at the aftermath and recovery with the Gulf oil spills as well as the recovery from Katrina. We spent a lot of time in the gulf and different neighborhoods connecting with other musicians and orgs to get involved there. It was amazing to see the spirit that the city has.”

Those drawn to Latyrx for its conscious aesthetic will find its progressive expectations satisfied. Its signature wordplay ricochets throughout the album, railing against crass commercialism, gun culture, and the overall desolate situation faced by many struggling Americans today.

Some may argue that progressive hip-hop is a relic from another generation, but for Lyrics Born, being an artist in 2013 is no different than in ’97. “It means what it’s always meant: I can’t do today what I did yesterday. That’s really how we approached this record and all my records. Neither of us is interested in covering ground that’s already been covered.”

Things are going well on the underground alt-rap stalwarts’ current tour together, and in the next year, Latyrx will be doing a larger world tour. As for the now-looming question about a third Latyrx album, the duo says: “We just hope the third one doesn’t take another 16 years to create. This last album was a chance for us to get back to doing what we do best. We got a lot of our solo stuff out of our system. The world needs unusual records right now.”