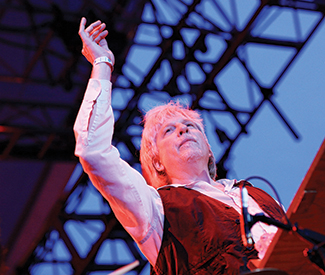 TOFU AND WHISKEY Rock ‘n’ roll guitarists do not typically have the opportunity to play with full, live orchestras. Though legendary avant-punk composer Rhys Chatham has long challenged that notion.

“I thought it would be nice to write a piece for a literal orchestra of guitars, both for its unique sonority, as well as for the social element of massing so many guitarists together, to give them the experience of playing in an orchestra, the way classical musicians do,” the 61-year-old writes from his home in France.

His first piece for multiple electric guitars was back in ’77 — Guitar Trio — and by ’84 he upped the number to six. But this is where the electric guitar orchestras of Chatham took a huge leap: 100 guitars, wailing, riffing, battling, rising in unison and twisting on their own windy paths.

The difference? A Secret Rose was a piece intended to be learned quickly, without placing “unreasonable demands” on the participating musicians’ time.

“An added plus as far as ease of mounting the piece is concerned is that I wrote the piece for guitars in a standard tuning, so the musicians can simply arrive with the strings they normally use, cutting down on the time it takes to restring the guitars, not to mention the purchasing of special strings for 100 guitarists!”

Like much of his other work, A Secret Rose is informed by Chatham’s strong connection to the roots of the ’77 punk scene, a world the minimalist composer cracked open in his early 20s. He says at the time he was trying to find his voice as a composer.

He grew up in New York City playing his father’s harpsichord, which he first picked up at age six. By age eight he was playing clarinet, and at 12, he switched to flute. “Luckily, my flute teacher was a contemporary music specialist, so she taught me Density 21.5 by Varèse, Sonatine for flute and piano by Boulez, and many others.”

In his early 20s, he first became entranced with the burgeoning loft jazz scene in NYC.

There, he studied alongside the greats, including La Monte Young — he even sang in his group, the Theater of Eternal Music — along with Terry Riley. He was an early member of Tony Conrad’s the Dream Syndicate, and played alongside Charlemagne Palestine.

Around this time though, there was the punk awakening. Everything changed with an electrifying Ramones concert in 1976 at CBGB.

“I had never seen anything like it in my life. Wow! I felt that I had something in common with their music. I mean, as a hardcore minimalist composer, I was only using one chord in the music I was doing at the time — the Ramones were using three — but I loved the repetition, and that’s when I decided to embrace this music into my own.”

He dropped the sax and picked up a Fender Telecaster guitar, and he was soon playing minimal music in a rock context at Max’s Kansas City and CBGB.

The classic Fender is still integral to his performances more than three decades later. For A Secret Rose, each guitarist will bring her or his own electric guitar. Says Chatham, “The piece was written for a Fender kind of sound…so we ask the guitarists to bring guitars that have a Fender type of sound.”

As for finding those 100 talented guitarists to join the orchestra? It was a collaboration with the Other Minds new music community nonprofit, which is presenting the West Coast premiere of A Secret Rose, and Chatham’s manager Regina Greene. The application process was wide open, so the end result is a batch of musicians from all over the world, including the UK, Argentina, and Canada. The Richmond performance in the dramatic waterfront Craneway Pavilion includes musicians from Guided by Voices, Akron/Family, Tristeza, Hrsta, Sutekh Hexen, and Girls Against Boys.

Many of the guitarists are also local: Other Minds received a grant from the James Irvine Foundation that focuses on “nonprofessional and professional musicians from low-income and ethnically diverse communities in Contra Costa and Alameda counties” to help put the event on. After the applications came in, Other Minds and Chatham went to work mixing in musicians with backgrounds in jazz, folk, noise, psych, metal, experimental, classical, and punk.

All those guitarists will be backed by electric bassist Lisa Mezzacappa, and drummer Jordan Glenn, both from the Bay Area. In a much smaller scale preview of A Secret Rose earlier this year, Mezzacappa and Glenn did Guitar Trio (version for eight musicians) with Chatham at the Lab in the Mission. “They are excellent musicians. Well, they’d have to be to accompany 100 electric guitars,” Chatham says. “They are the rhythm section, the wind, indeed the hurricane that lights the fire of the playing of the guitarists!”

The performance itself is structured similar to a symphony, starting with an introduction and slow prelude, followed by an allegro movement

“[And] then I break with sonata form and have a structured aleatory movement, followed by an adagio section, ending with a brisk allegro, although having a vastly different character than the first one,” explains Chatham.

“All the music is notated, even the aleatory section has specific prose instructions. When we mount the piece it will probably be one of the few times the guitarists make use of a music stand!”

Melt-Banana has always been a curious subject: rapid, triumphant grindcore matched to yelpy staccato vocals tinted with Japanese accents, like Spazz meets Deerfhoof. And with each album, the group — formed in 1993 — has proved itself still endlessly fascinating, complex, even fun. Its latest, Fetch (A-Zap), is its first in six long years, and it comes speeding back to the present, not a moment of chaos lost. Check “The Hive” — it’s like riding a terrifying roller coaster on acid with a screeching sprite on your shoulder. With Retox.