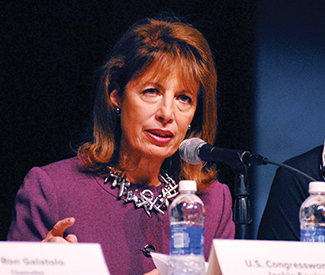 Federal politicians are blasting the commission that would close City College of San Francisco, calling the entire accreditation process a debacle.

At a forum US Rep. Jackie Speier (D-SF) and Rep. Anna Eshoo (D-Palo Alto) convened at City College on Nov. 7, Speier trumpeted what local advocates have said all along: The evaluation of CCSF was bungled, lacked transparency, and violated federal education regulations, all pointing to a desperate need for reform of its accreditors.

Accreditation has been the means to check the quality of education in colleges, but now a growing chorus of critics says the process can be used to carry out an ideological agenda and usurp local control (“Whose college?” Aug. 13).

Yet upending the accreditation process could also have unintended consequences, perhaps letting corporate and conservative interests seize the chance to implement their long-simmering agendas.

Either way, it is beginning to look like the fight to save City College could end up being about more than just City College.

The Accrediting Commission of Community and Junior Colleges keeps a watchful eye on the community colleges of California, Guam, and Hawaii. After a six-year review, the ACCJC this summer rocked City College by terminating its accreditation, pending appeals before the sentence is carried out in July 2014.

At the forum, Speier said the debacle with the ACCJC signaled a need to reform accreditation on a national level, citing a lack of public accountability.

“I think the ACCJC has run amok, they have lost their vision — if they ever had one,” Speier said in an interview after the forum. “They are riddled with conflicts of interest and arbitrariness.”

Teachers, faculty, and education advocates packed City College’s Diego Rivera Theater, all cheering at every jibe toward the ACCJC. Pressure on the group is mounting. A third lawsuit against the body was announced the day of the forum, this one filed by the activist group Save CCSF.

But Speier sees the problems as stemming from the US Department of Education, which she said needs the tools to correct problems at the ACCJC, something she plans to meet with Education Secretary Arne Duncan to discuss.

“The Department of Education only has one hammer, and that is to deny the ACCJC certification,” she said.

The group is slated to undergo this evaluation in December, which could spell its end. But if the fight for City College sparks a change in accreditation nationally, what would take its place?

There are wolves at the door of the US education system, for-profit colleges with a history of taking vulnerable students to the bank with nothing to show for it. And they want accreditation reform too.

THE DEVIL YOU KNOW

The ideological argument between the ACCJC and City College is taking place nationally.

President Obama called for a change to college accreditation in his last State of the Union speech, calling for higher graduation and transfer rates for community colleges (see “Who killed City College?” July 9).

One of the biggest cheerleaders of the president’s reform is the American Enterprise Institute, a conservative think tank. At a conference it held on accreditation last month, AEI and its partners lampooned accreditation as it stands now.

“This is a system that is flawed, unable to deal with the rapidly changing higher education landscape,” Anne D. Neal, a partner of the American Council of Trustees and Alumni, a national education reform group, said at the conference. “If meat inspections were as loose as college accreditation… most of us would have mad cow disease.”

On the surface, the critique seems reasonable. More people should transfer, and more people should graduate. But how colleges get those numbers is the challenge. The ACCJC asking City College to jettison students not aiming for a higher degree was just the start, one higher education watchdog told us.

“There are people on both sides saying that accreditation is broken. The White House is pushing this, as are Republicans. You almost never hear that,” Paul Fain, a reporter for Inside Higher Ed, told the Guardian.

But the reform may lead to the transformation of accreditation, allowing tech companies and long distance online learning universities to bypass the process entirely.

Accreditation is seen as “holding back innovators who are trying to transform the Internet,” Fain said.

These “innovators” are largely for-profit colleges that want to offer single courses or shortened courses online, like the Minerva Project or Straighterline, both online universities lobbying Congress to loosen accreditation requirements.

But for-profit colleges have been attacked nationally for their abysmal job placement rates, and their graduation rates aren’t much better. A widely circulated 2010 report by the think tank Education Trust found that for-profits in the U.S. had a graduation rate of 22 percent.

And with many of those for-profits fighting for accreditation reform by Congress, it’s unclear how a push to reform accreditation from Speier would aid or stall them.

ACCJC President Barbara Beno said that City College is having problems facing reality. Beno would only speak with the Guardian by email through a representative. She defended the accountability of the ACCJC, saying that her doors were always open.

“Colleges don’t need a forum like that held on Nov. 7; they can write to the commission at any time, or ask to address the decision-making commissioners at one of their two meetings each year, or can call up the commission chair or president,” Beno wrote.

“Instead of joining forces to help improve City College, many purported supporters of the college are bent on disrupting the ACCJC operations. It is simple to blame the messenger of bad news,” she wrote. “People unhappy with the commissioners’ decisions are targeting [me] for doing [my] job.”

But Rafael Mandelman, a newly elected member of CCSF Board of Trustees, told those assembled at the forum that ACCJC was unprofessional and unduly punitive: “I went from ACCJC agnostic, to skeptic, to foe”

Dr. Sarah Perkins, vice president of instruction of Skyline College, told the forum that ACCJC is hard to work with.

“I came here to California after spending 25 years in the middle part of the country under the Higher Learning Commission,” she said, contrasting that accrediting agency with the bullying done by ACCJC. “That I even feel like I’m putting my college at risk by speaking at this forum speaks volumes.”

Indeed, the ACCJC even makes criticism of the agency or its methods grounds for a revocation of accreditation, making “collegiality” part of its “policy on institutional integrity and ethics.” CCSF Special Trustee Bob Agrella in September cited that as one reason not to criticize the agency.

Sen. Jim Beall and Assemblymember Tom Ammiano were also in attendance at the forum, and promised to continue the fight at the state level to preserve City College. The Joint Legislative Audit Committee is evaluating ACCJC at the request of those legislators and Sen. Jim Nielsen (R-Gerber).

“We will kick a lot of butt, with class, of course,” Ammiano said.

And would City College close down? “It’s not going to happen,” Speier said to the cheering crowd.