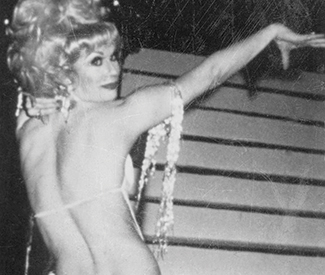 Here’s an insane and insanely wonderful San Francisco nightlife life — perhaps the kind of life we’re in danger of seeing no more. Run away from home in the 1950s and join the circus as a male hoochie-coochie dancer in the sideshow. Make your fame in the Midwest as glamorous and naughty drag performer back when men could be jailed for wearing a dress (priests excepted). Move to San Francisco and become a glorious institution, enshrined every weekend at Aunt Charlie’s in the TL, where you perform right up until you pass away at 76 in 2011 — “The Girl with the Liquid Spine,” looking and living fabulous as ever without losing your feisty, gritty edge. Then the accolades, the grand service, the big-screen documentary Forever’s Gonna Start Tonight.

And now, the museum exhibition. Vicki Marlane: I’m Your Lady (opening reception Fri/15, 7-9pm, $5 GLBT History Museum, 4127 18th St., SF. www.glbthistory.org) displays “video, artifacts and photographs from the performer’s estate that tell a remarkable life story.” But maybe it does more than just celebrate the kind of unique personality San Francisco used to make room for. Maybe Vicki’s life can inspire us to take heart that this city, too, has a liquid spine, and can bend itself around (and over) any obstacle that threatens to block us with blandness and smother us in meh. Forever really is gonna start tonight!

Fancy an Oddjob? There are an estimated 15,000 people moving in along Market Street in the next five years. Where will they all eat and drink? That’s the first thing that pops right into my mind. And then: Woah, I need to open a bar or a pop-up exotic flan truck or something and cash in. And then, also: Does this asymmetrical haircut make my butt look flat?

Well, someone has done something at least about the bar part — and I’ll soon be parking my well-rounded (thank you) cheeks at Oddjob (1337 Mission, SF. www.oddjobsf.com), a cute new joint in the old Shine spot from two of my longtime secret boyfriends Jeff Whitmore (Public Works) and Peter Glikshtern of practically every club in town, plus Jordan Langer of my former secret favorite bar, Big, now sadly closed.

Oddjob looks amazing — it has the deconstructed, construction site-like ambiance of Public Works in the front (including a conveyor belt bar top, drafting chair bar stools, and a neato Rube Goldberg-like “Corpse Reviver” automated cocktail maker) and the playfully swanky-swaggy atmosphere of Big at the back (along with Big’s incredible cocktail sensibility). Oddly, the press materials say Oddjob is located in, ugh, “Mid-Market Gulch,” which surely equals “SoMissPo” in catastrophic neighborhood nomenclature. A good stiff drink might erase that.

The ever-traveling Alphahouse label head, coming at us via St. Louis, blew me away with a roiling, bass-heavy techno set the old Kontrol party in 2008. But come for the whole evening, which also features phenomenal up-and-comers Stephanie from Brooklyn and Marija Dunn and Amber Reyn from the Bay.

As luck would have it, one of Butane’s partners in tech-crime, Swedish-Chilean Alexi Delano (they release the booming EP “What You See Is What There Is” on Nov. 18) is in town at the very same time. Oooh, techno fight! Alexi experiments with dubby, acid effects but still keeping things pounding.

Before the excruciatingly boring hyper-machismo (and hyper-whiny) phase of industrial music kicked in, there was the dark, delicious dance floor stomp of bands like Nitzer Ebb, early Ministry, and this aggressive batch of Germans, KMFDM, who are back and louder than ever.

The old underground space that housed this incredible house and disco party is now a super-fancy restaurant. But you can’t stop the music. Seriously, one of the cutest affairs going in the city, with a lovely, freaky crowd. Happy birthday DJ Robin Simmons!

Oh, honey. If you don’t know, you just don’t know. True masters Kenny Dope and Lil Louie Vega, who brought out one of the most diverse crowds I’d ever seen when they were at 1015 last time, are back to school us on classic house jams, soulful grooves, Latin rhythms, and vinyl wizardry — on the outstanding Mighty sound system. I can’t get no sleep.

Hot-hot quarterly mag for transmen and admirers throws a party to celebrate the release of its latest issue — the Party Issue, duh. Hosted by Amos Mac and Rocco Katastrophe, with DJs Rapid Fire and Jenna Riot. Transmazing!