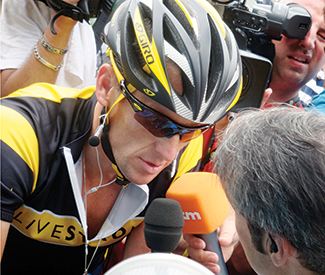 If something appears too good to be true, the saying goes, it probably is. Take Lance Armstrong, who beat cancer to become a cycling superstar, winning the grueling Tour de France a record seven consecutive times. He vehemently denied using performance-enhancing drugs until January 2013, when he ‘fessed up during a tastefully choreographed sit-down with Oprah. By that point, the big reveal wasn’t that he’d doped his way to athletic glory — it was that he was finally admitting to it.

“This is a story about power, not doping,” a talking head points out in Alex Gibney’s latest doc, The Armstrong Lie. Gibney, an Oscar winner for 2007’s Taxi to the Dark Side (he also made this year’s We Steal Secrets: The Story of WikiLeaks), set out to make something more along the lines of The Armstrong Return, shadowing Armstrong as he prepped for his 2009 Tour de France comeback. He envisioned crafting a “feel-good movie,” especially when Armstrong notched an impressive third-place finish — a feat intended to silence the drug rumors once and for all. In the end, it only amplified the skepticism that loomed over his accomplishments. And as the evidence against Armstrong mounted, Gibney scrapped his original concept and went in a decidedly darker direction.

Gibney, who narrates in the first person, unwittingly became a character in his own film. Armstrong’s critics, interviewed for Lie, admit they spotted the acclaimed documentarian among Armstrong’s Tour de France entourage and feared he was “buying into the bullshit.” Among these voices are Armstrong’s former US Postal Service teammate, Frankie Andreu, and his wife, Betsy, who both testified during the US Anti-Doping Agency’s investigation into Armstrong. Over the years, they’d been excoriated by their former good friend and his supporters for speaking out against him.

A feel-good movie, this is not. One need only read the film’s title to understand what motivated Gibney’s second attempt at making an Armstrong doc. “For this new film, doping was not the most important thing,” he writes in his director’s notes. Doping, he says, “was an essential part of the culture of professional cycling … and evidence of [Armstrong] doping had been hiding in plain sight since 1999.” Instead, “it was the lie that interested me” and “the abuse of power. Armstrong was so powerful in his sport that he could protect and defend his lie with the arrogance and cruelty that he showed his cycling rivals on the road.”

That arrogance extended to his participation in Gibney’s original film; unsurprisingly, he made for a control-freak documentary subject. But all bets were off once Armstrong came clean. He wasn’t Superman — he’d been pumping dope like everyone else. He was also revealed to be a bullying jerk who’d used his celebrity power to cover his tracks, according to his former teammates and associates. And once the curtain was lifted, he forfeited the luxury of being “the manager of his own storyline,” as Gibney puts it.

For someone like Armstrong, possessed of such carefully tended personal mythology, that was huge. His reputation suffered and sponsors cut ties. (In at least one San Francisco gym, an image of the Golden Gate Bridge was hastily tacked over an Armstrong photo mural.) His seven victories were stripped away, and — worst of all — cancer survivors who’d lifted him up as a hero were left feeling deeply deceived.

Ultimately, Gibney’s film probes deeper than Armstrong’s flaws; it’s careful to point out that drug use is widespread among professional cyclists (and in other pro sports, too — just ask Barry Bonds), who are surrounded by an insular, high-stakes culture that encourages it. The sports world lives and dies by the next world record or superhuman achievement. Is it any wonder that elite athletes seek out that extra competitive edge? And that Armstrong would believe he had the power to rearrange reality to keep his victories intact? *