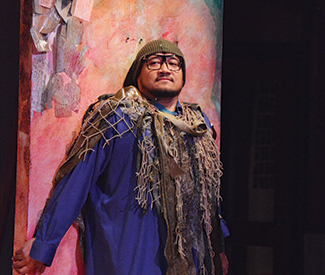 Two mothers are coping with grief — and becoming friends — in a room at a Bakersfield community center. Ruth (Nora El Samahy) is still not at the point of speaking the depth of her burden, and instead chirps on about the horror visited on her murdered child with a kind of fierce, enforced casualness, fueled by too much coffee. Mary (Catherine Castellanos), meanwhile, her emotional turmoil welling just beneath the surface, has a stronger bearing — and a peculiar lilt indicative of someone who has only recently heard the sound of her own voice.

“My son is alive,” avers Mary. “I don’t mean to be rude, but it’s true,” she tells a skeptical Ruth. “But he’s spinning inside a very big tornado,” she explains, before catching herself. “Oh. That’s very dramatic…”

It is dramatic. But then her son, Isaac (Sean San José), a onetime child faith healer turned junkie drifter, is an extraordinary person, named with equally telling Biblical import. Sacrificed without his consent to the extravagant will of his parents — including a wily Pentecostal preacher of the Central Valley (Donald E. Lacy Jr.) who sports a red tail under his Western gear — the once gifted Isaac has an ambivalent relationship with the open road that set him free but left him rootless, lost, dogged by his past. Spurning pleas by his drug-addled girlfriend (Maria Candelaria) to be healed by him, he is now headed backward down that road, haunted by her death from a subsequent overdose, in search of his estranged brother (Brian Rivera) and some kind of redemption. It’s a road that leads him to the Golden Gate, as far west as you can get, and maybe a step too far.

Mary’s deflating note of modesty at the top of the play, amid the outsized proportions of her character’s almost classical stature, not only produces a gentle laugh. It marks something wise and alluring in the work of Luis Alfaro, which resurfaces with varied success throughout Campo Santo’s production of Alleluia, the Road, a world-premiere collaboration with the playwright now up at Intersection for the Arts. That amounts to a built-in, meta-theatrical commentary on the epic proportions of the vernacular, and the normally unsung lives that speak it. (Part of the Triangle Lab’s Califas project and festival, summoning and celebrating voices of the Central Valley, the play takes place amid the faces and recorded stories of an accompanying gallery exhibition.)

It’s a knowing style, mixing pop references and inflated prose, that lends itself naturally to fourth-wall breaks, asides, or magical realism; and it reflects throughout a certain ethnic “double consciousness” (to borrow W.E.B. DuBois’s famous term) alive and present in the “real” world. For the characters seem aware at times of the vastly different cultural terrain they occupy simultaneously and straddle almost surreally — including the narrative tropes of the dominant culture, as well as a set of more familial narratives rooted in some mélange of Latino, African American, and indigenous traditions.

This double consciousness in the writing is redolent of a similar tragi-comical tension in the plays of Octavio Solis, for example, a Campo Santo stalwart. Or those of Richard Montoya — whose American Night premiered in the summer at California Shakespeare Theater as part of the same Califas project of Intersection’s Triangle Lab (a community-expanding initiative of Intersection and Cal Shakes). But it does not necessarily make for a strong play, and neither American Night or Alleluia, the Road is very persuasive as reflections of real life, or even magical-real ones. (Montoya’s The River, which premiered last April, while uneven, was a more inspired outing penned specifically for Campo Santo, also as part of the Califas project.)

Among other problems, the narrative twists and turns in Road feel too well trod already, and too bumpy in terms of characterization or backstory. (These are characters who speak their complexes and motivations with too much ready articulation, leaving little for the audience to interpret or intuit.) At the same time, the use of a choir of voices, bursting now and then into some classic spirituals, tends to feel thematically heavy-handed rather than rousing and meaningful. Aesthetically, instead of genuinely forward leaning, the play ends up seeming derivative of stronger Campo Santo productions of the past.

Directed (like Night) by Cal Shakes’ Jonathan Moscone, the action unfurls along a runway playing area, two small stages on either end, and around the audience, but for all its structured intimacy is only sporadically effective. Castellanos and San José deliver the strongest, most intricately crafted performances — and indeed their characters are the more detailed ones. San José also offers a volcanic monologue that’s a highlight of the evening. There is a listless and forced feeling to the performances overall, however, which reinforces the sense that this road does not lead anywhere very new.

Who speaks, who is heard, and the power of the word — a major theme connecting not only the stories in Alleluia, the Road but those of the larger Califas project of which it is a part — is a perennially important, and potent, subject for drama. But our ability to connect with it in Road, at least, may require that it be pitched in a new key. *

Intersection for the Arts