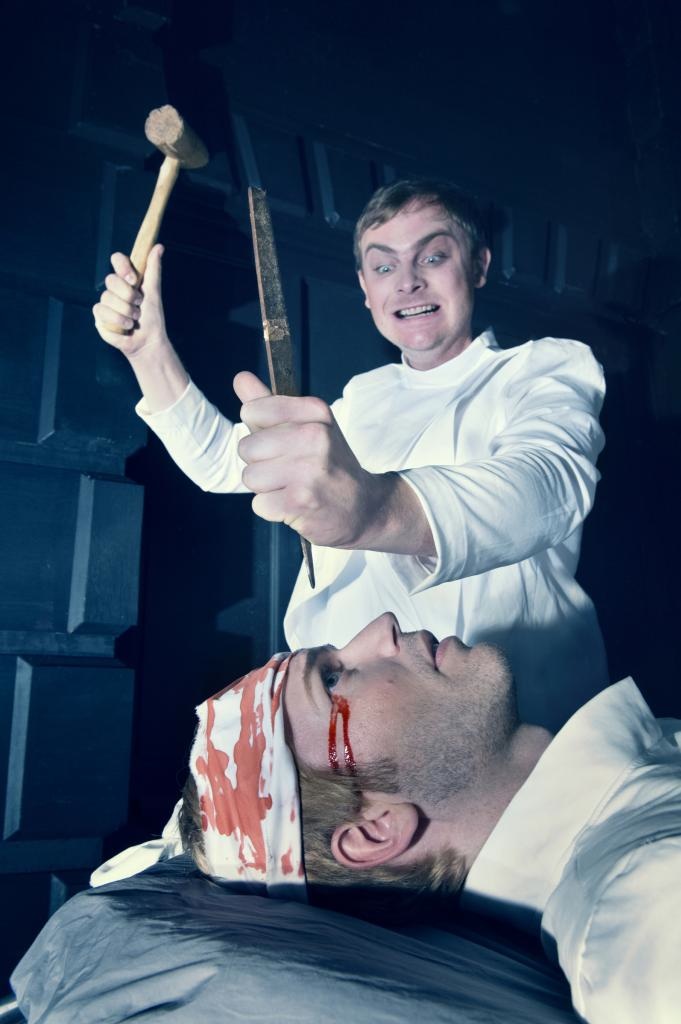 Nothing quite says “Happy Halloween” like an evening full of splatter gore and general mayhem, and this year there were several options to choose from, including an interactive zombie apocalypse battle royale at Chez Poulet and a multi-level haunted house extravaganza at the Old Mint which promised similarly to let patrons “live the horror movie,” hopefully sans actual evisceration of ticket-holders, but these are dangerous times we’re living in. On the theatrical front we had the Thrillpeddlers strutting their creepy stuff onstage at the Hypnodrome (through Nov. 23), buckets of blood and teen angst at Ray of Light’s Carrie: The Musical, and a brief, yet enGROSSing run of the thematically-appropriate Grand Guignol, co-produced by Pianofight.

Not the straightforward revivalism practiced by the Thrillpeddlers, this Grand Guignol is both a play about, as well as a direct descendent of, the form. Penned by Kneehigh Theatre’s Carl Grose, the play centers mainly on one of the most prolific playwrights of the Théâtre du Grand Guinol’s heyday, André de Lorde (Christopher Sugarman) and his sometime collaborator, psychologist Alfred Binet (Thaddeus Bing). Plot points and diversions from several of de Lorde’s best known plays, including The System of Doctor Tarr and Professor Fether, Crime in a Madhouse, and The Laboratory of Hallucinations are woven throughout the piece, and the rogue’s gallery of characters are mostly pulled from the actual pages of history — such as Max Maurey (Brian Trybom), the theater’s tireless proprietor and promoter, inventive propsmaster Paul Ratineau (Raymond Hobbs), and actress Paula Maxa (Christy Crowley) “the most-assassinated woman in the world” and original “Queen of Scream”.

Opening with a scene set in a mental institution, the play pulls the oddience quickly into the exaggerated aesthetic of the Grand Guignol, as it becomes quickly apparent that the inmates are running the asylum, and blood-drenched violence ensues until an excitable patron runs up onto the stage and faints with shock, an act that heartens the small company as they think he is a critic who will give their play a rave (perhaps raving) review. Instead it turns out he is Binet, and the seeds for his future artistic collaboration with de Lorde are thus sown.

Bing as Binet bubbles over with nervous tension, while Sugerman’s de Lorde is so pale and withdrawn he appears a specter haunting the corners of his own life, though in truth it is the ghost of Edgar Allen Poe (Cooper Carlson) who comes to haunt him more frequently, a pushy creative partner offering his own work up for adaptation (such as the aforementioned Doctor Tarr). Pianofight regular Christy Crowley inhabits the body and reputation of Maxa with devilish relish, dying dramatically on demand, while Andy Strong rounds out the capable cast as actor George Paulais, whose ego is only exceeded by his extreme self-interest. A side-plot involving the identity of a real-life serial killer who stalks Montmartre results in the play’s most gleefully gross-out moment, and Binet’s unlikely collaboration with de Lorde results in perhaps the messiest artistic divorce since, well, ever.

Messy is a byword of the Grand Guignol, and a segregated splatter zone surrounds the stage, crammed with patrons who have paid extra for the privilege of being randomly drenched by stage blood. It’s a bit of an awkward set-up, the gap between the zone and the rest of the seating is so large it’s almost as if one were perched in the balcony, or in the back of an art-house movie theater, a little too far removed from the up-close and too-personal proximity that really amplifies the Grand Guignol experience. Thankfully Pamila Z. Gray’s lighting, Hannah Birch Carl’s sound design, and Pandora FX helped amp up the bawdy, bloody atmosphere, and as far as All Hallows’ Eve experiences go, an evening at Grand Guignol was a worthy treat.