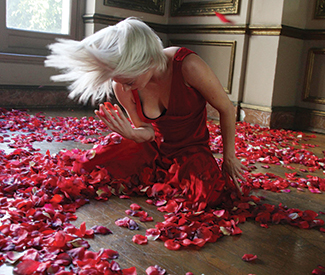 DANCE When ODC opened its new theater in 2010, Brenda Way’s Architecture of Light celebrated the building’s bones and its potential for dance. This past weekend, the Los Angeles-based Rosanna Gamson/World Wide took over the whole complex for Layla Means Night, a feast of non-linear storytelling through dance, narrative, music, design, food, and drink. For this incarnation, the company brought richly detailed sets and costumes, excellent dancer-actors, and a first-rate trio of Persian musicians. They also made fine use of ODC Dance Jam’s teen dancers, whose poise and competence should be the envy of many a professional.

That said, not everything worked: A physical spelling of the difference between Arabic and Roman script fell flat. A solo for a caged bride in a white shift felt like filler. The celebratory finale looked thrown together. And the piece was slow getting off the ground.

Layla is a 70-minute work about power, specifically feminine power, inspired by Scheherazade, the heroine of 1,001 Nights, the collection of Middle Eastern and Indian folk tales, with which the heroine kept herself alive one more night because the king wanted to hear one more story. While she saves herself and other potential brides, the work does not address her transformative power to turn the king into a loving human being. (That was left to Alonzo King’s 2009 Scheherazade.) Gamson structured Layla into a number of distinct episodes whose sequences you watched according to your assigned group: men, women, or mixed. Just like a tourist, you followed a guide, traipsing up and down the theater’s three floors. While waiting to be admitted to the next attraction, you could catch aural cues of what other people were seeing. It certainly raised your curiosity, something this Scheherazade has also learned.

Layla‘s episodes formed a marvelously rich tapestry, the details of which constantly elicited admiration. Even though the jumbling of sequences felt distracting, they ultimately coalesced into a loosely structured but convincing theatrical experience. You can’t ask for much more.

Initially, young women offered to wash your hands, or offered a mimosa. Dominating this congeniality was an implacable Carin Noland, whose cleaver came down (on oranges) with the inevitability of a clock. Later, when you heard a rooster crow? Down came that ax. Gamson’s six women dancers, in blood red shifts, wove through the evening in almost Grahamesque modern dance, softened by a liquid use of the torso and the eloquent hands. You saw them as shadows, peering through drapes or striding and howling.

Balancing these particular images of female power was ODC’s teen Dance Jam. Lined up in a countdown of brides, they stepped into individual solos until they hit the floor and a communal handclap substituted for the ax falling. In the finale, they looked fresh and yet so professional in folkloric-inspired couple and circle dances. In another section, an overlapping trio of similar gestures in what looked like a cage looked less convincing.

In her confrontation with the King (a fierce C. Derrick Jones III), Gabrielle Rhodeen’s Scheherazade posed straightforward questions about sex that were both alluring and cleverly manipulative. Her white costume looked like a mixture of wedding dress and boudoir gown. If Layla had a single dramatic highpoint, it would have been the explosive cat-and-mouse game between these two dueling characters.

Layla is a piece that asks the audience to make decisions. Did you really want to accept a slice of orange when you knew where it came from? Two of the gorgeous sets — one a tent-like red hexagonal, the other a fragile, white paper cylinder — had slits in them. You had to step up and look in. Did this make you a voyeur? For me it did. I think this was Gamson’s way of making the audience not only participate in but also become complicit in the action.

Perhaps Layla’s most uncomfortable section involved our all-women’s group walking into the theater proper. The men were seated and blindfolded while the teen dancers whispered into their ears. It was creepy. Again, did we become participants in whatever was going on by watching this?

The ongoing offering of food and drink — appealing to the sense of taste, something not usually satisfied in the theater — was another way in which Gamson tried to pull the audience into her work. It raised, of course, the question on just how willing an audience member was to step out of his or her observer role.

A gorgeously laid out banquet table was used very little. It’s where Gamson asked for an account of a life-changing moment after having recounted a seminal one in her own life. She wanted us to share. Only one did (in writing). Nor did anybody follow the invitation to enter the final celebratory dance. Maybe there’s a reason why we have performers and observers: They need each other, but don’t necessarily want to change roles. *