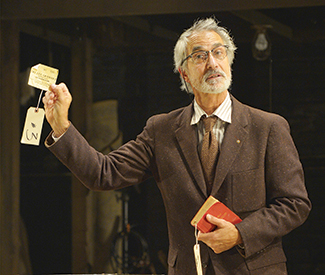 THEATER Just last night a cordial campfire conversation with a hobgoblin and a menorah tumbled precipitously from the obscenity of rents in the city to the cold hard facts of our existence on this planet. Halloween was not yet over, and the really scary stuff had already returned.

You don’t have to be a librarian to have gathered something of the unlikeness, the arbitrariness, the inconsequence of an individual life measured against the eons of time and the vastness of space — but let’s say you are a librarian. What would get under your skin more than this? Maybe one thing: the fact that in addition to the obvious indifference of the universe, existence comes with the seemingly unnecessary cruelty visited on us by our fellow human beings.

Both of these unpalatable situations gnaw at the bookish protagonist in Glen Berger’s 2001 play, Underneath the Lintel, currently enjoying a revival courtesy of American Conservatory Theater. Our protagonist, the play’s sole character, is a garrulous but faintly troubled librarian from Holland (played by an endearingly geeky David Strathairn, in trim graying beard and neat but comfy wool suit). In a makeshift lecture in an old rented theater, the librarian-turned-sleuth presents his remarkable findings concerning the possible reality behind an ancient myth. Along the way, we discover a gradual dovetailing of his own increasingly unmoored career and that of his subject: the fabled Wandering Jew, condemned to bear silent witness to history after a show of callousness before a desperate stranger at his door (who turned out to be Christ on the march to Golgotha, wouldn’t you know it).

The play — whose title refers to the upper portion of a doorway, the regretful place from which an ancient cobbler turned his back on his fellow man and our modern-day librarian dismissed the only woman he ever loved — works a tension between competing frameworks. Bounded by our little lives with their precious but small concerns, the play suggests, we too easily miss the bigger picture and stumble accordingly. But even when confronted with the worst of fate, the baleful immensity of history, or our own actions, we also carry on despite all the universe may throw at us.

Of course, the Geary stage is almost as vast as the aforementioned universe. Director Carey Perloff and her actor work hard to see this pocket-sized piece expand as much as possible to fill it. Strathairn’s fastidious and childlike librarian moves nervously, enthusiastically around the stage, scaling a tall freestanding ladder one moment, rummaging around a set of files the next, or stalking the second-tier storage area at the back of scenic designer Nina Ball’s atmospherically dingy, drippy, haze-filled bric-a-brac set.

The only time this nervous energy seems to go too far is in the final moment, when the librarian exits the stage in an awkward physical underscoring of a key line, wandering out who-knows-where. But Berger’s charming mystery, while ultimately affirming, has a haunted, melancholy streak running through it — a creeping pessimism at the edge of the firelight that is its most provoking aspect, and saves it from being purely sentimental.

ONCE UPON A WEEKNIGHT DREARY: ‘GRAND GUIGNOL’

The father of Paris’s Théâtre du Grand Guignol, French playwright Oscar Méténier (1859–1913), rests in pieces — or at least the pieces he left for the stage; naturalistic horror plays that were themselves full of body parts strewn hither and thither. Thither, in this case, has been renamed “the splatter zone” for playwright Carl Grose and director Mitchell Altieri’s macabre comedy homage to the legendary Parisian theater and genre (a specialty of local company Thrillpeddlers, whose own “Shocktoberfest” is also up and running not far away).

But though audiences in the first rows sit dutifully in plastic rain ponchos, the gore and the titillation and the laughs are surprisingly spare. Grand Guignol‘s opening night, moreover, was a rocky horror show, to say the least, plagued by delays, poor acoustics, slippery pacing, slightly inept execution (of executions, and other bloody deeds), and a storyline almost as mangled as the bodies it left in its wake. It has a game cast, however, and while variously successful at projecting their voices above the atmospheric sound design, its members deliver some nicely tailored performances under the circumstances, which are messy in ways intended and otherwise. *