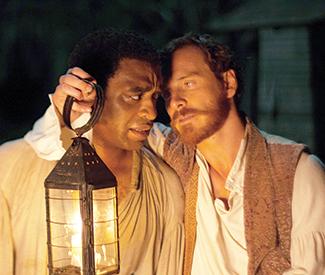 The movie you need to see this weekend, ASAP, is 12 Years a Slave — one of the most important releases of the year, and a likely contender for all possible awards, including Best Actor and Best Picture. (Review here.) Also new to theaters is the Cannes-winning, controversy-stirring Blue is the Warmest Color. (Review here.)

Read on for more short takes on today’s new releases, plus a 1979 cult classic that’s ripe for rediscovery.

About Time Richard Curtis, the man behind 2003’s Love Actually, must be enjoying his days in England, rolling in large piles of money. Coinciding with the 10-year anniversary of that twee cinematic love fest comes Curtis’ latest ode to joy, About Time. The film begins in Cornwall at an idyllic stone beach house, as Tim (Domhnall Gleeson) describes his family members (Bill Nighy is dad; Richard Cordery is the crazy uncle) and their pleasures (rituals (tea on the beach, ping pong). Despite beachside bliss, Tim is lovelorn and ready to begin a career as a barrister (which feels as out of the blue as the coming first act break). Oh! And as it happens, the men in Tim’s family can travel back in time. There are no clear rules, though births and deaths are like no-trespass signs on the imaginary timeline. When he meets Mary (Rachel McAdams), he falls in love, but if he paves over his own evening by bouncing back and spending that night elsewhere, he loses the path he’s worn into the map and has to fix it. Again and again. Despite potential repetition, About Time moves smoothly, sweetly, slowly along, giving its audience time enough to feel for the characters, and then feel for the characters again, and then keep crying just because the ball’s already in motion. It’s the most nest-like catharsis any British film ever built. (2:03) (Sara Maria Vizcarrondo)

A.K.A. Doc Pomus “All greatness comes from pain.” The simple statement comes from Raoul Felder, brother of legendary R&B songwriter Doc Pomus, in the beautiful, crushing mediation on his brother’s life, A.K.A. Doc Pomus, opening theatrically this week after serving as the closing-night film of the 2012 San Francisco Jewish Film Festival. Doc wrote some of the greatest music of a generation: R&B and early rock’n’roll standards such as “This Magic Moment,” “A Teenager in Love,” “Save the Last Dance For Me,” and “Viva Las Vegas” — songs made famous by the likes of Dion, the Drifters, and Elvis Presley. Jewish, debilitated by polio, and vastly overweight, Doc defied expectations while struggling with a lifetime of outsider status and physical pain. William Hechter and Peter Miller’s doc offers a revealing look at his remarkable life. (1:38) Vogue. (Emily Savage)

Diana The final years of Diana, Princess of Wales are explored in what’s essentially a classed-up Lifetime drama, delving into the on-off romance between “the most famous woman in the world” (Naomi Watts) and heart surgeon Hasnat Khan (Naveen Andrews). Relationship roadblocks (his Muslim family, back home in Pakistan, is hesistant to accept a divorced, Christian Brit as their son’s partner) are further complicated by extraordinary circumstances (Diana’s fame, which leads to paparazzi intrusions on the very private doctor’s life), but there’s real love between the two, which keeps them returning to each other again and again. By the third or fourth tearful breakup — followed by a passionate reunion — Diana’s story becomes repetitive as it marches toward its inevitable tragic end. Still, director Oliver Hirschbiegel (2004’s Downfall, another last-days-in-the-life biopic, albeit of a slightly different nature) includes some light-hearted moments, as when a giggling Diana smuggles Hasnat through the palace gates (past guards who know exactly what she’s up to). As you’d expect, Watts is the best thing here, bringing warmth and complexity to a performance that strives to reach beyond imitation. (1:52) (Cheryl Eddy)

God Loves Uganda Most contemporary Americans don’t know much about Uganda — that is, beyond Forest Whitaker’s Oscar-winning performance as Idi Amin in 2006’s The Last King of Scotland. Though that film took some liberties with the truth, it did effectively convey the grotesque terrors of the dictator’s 1970s reign. But even decades post-Amin, the East African nation has somehow retained its horrific human-rights record. For example: what extremist force was behind the country’s Anti-Homosexuality Bill, which proposed the death penalty as punishment for gayness? The answer might surprise you, or not. As the gripping, fury-fomenting doc God Loves Uganda reveals, America’s own Christian Right has been exporting hate under the guise of missionary work for some time. Taking advantage of Uganda’s social fragility — by building schools and medical clinics, passing out food, etc. — evangelical mega churches, particularly the Kansas City, Mo.-based, breakfast-invoking International House of Prayer, have converted large swaths of the population to their ultra-conservative beliefs. Filmmaker Roger Ross Williams, an Oscar winner for 2010 short Music by Prudence, follows naive “prayer warriors” as they journey to Uganda for the first time; his apparent all-access relationship with the group shows that they aren’t outwardly evil people — but neither do they comprehend the very real consequences of their actions. His other sources, including two Ugandan clergymen who’ve seen their country change for the worse and an LGBT activist who lives every day in peril, offer a more harrowing perspective. Evocative and disturbing, God Loves Uganda seems likely to earn Williams more Oscar attention. (1:23) Roxie. (Cheryl Eddy)

Kill Your Darlings Relieved to escape his Jersey home, dominated by the miseries of an oft-institutionalized mother (Jennifer Jason Leigh) and long-suffering father (David Cross), Allen Ginsberg (Daniel Radcliffe) enters Columbia University in 1944 as a freshman already interested in the new and avant-garde. He’s thus immediately enchanted by bad-boy fellow student Lucien Carr (Dane DeHaan), a veteran of numerous prestigious schools and well on the road to getting kicked out of this one. Charismatic and reckless, Carr has a circle of fellow eccentrics buzzing around him, including dyspeptic William S. Burroughs (Ben Foster) and merchant marine wild child Jack Kerouac (Jack Huston). Variably included in or ostracized from this training ground for future Beat luminaries is the older David Kammerer (Michael C. Hall), a disgraced former academic who’d known Carr since the latter was 14, and followed him around with pathetic, enamored devotion. It’s this last figure’s apparent murder by Carr that provides the bookending crux of John Krokidas’ impressive first feature, a tragedy whose motivations and means remain disputed. Partly blessed by being about a (comparatively) lesser-known chapter in an overexposed, much-mythologized history, Kill Your Darlings is easily one of the best dramatizations yet of Beat lore, with excellent performances all around. (Yes, Harry Potter actually does pass quite well as a somewhat cuter junior Ginsberg.) It’s sad if somewhat inevitable that the most intriguing figure here — Hall’s hapless, lovelorn stalker-slash-victim — is the one that remains least knowable to both the film and to the ages. (1:40) (Dennis Harvey)

Last Vegas This buddy film may look like a Bucket List-Hangover hybrid, but it’s got a lot more Spring Breakers in it than you’d expect — who beats Vegas for most bikinis per capita? Four old friends reunite for a wedding in Vegas, where they drink, gamble, and are confused for legendary men. Morgan Freeman sneaks out of his son’s house to go. Kevin Kline’s wife gave him a hall pass to regain his lost sense of fun. Kline and Freeman trick Robert De Niro into going — he’s got a grudge against Michael Douglas, so why celebrate that jerk’s nuptials to a 30-year-old? The conflicts are mostly safe and insubstantial, but the in-joke here is that all of these acting legends are confused for legends by their accidentally obtained VIP host (Romany Malco). These guys have earned their stature, so what gives? When De Niro flings fists you shudder inside remembering Jake LaMotta. Kline’s velvety comic delivery is just as swaggery as it was during his ’80s-era collaborations with Lawrence Kasdan. Douglas is “not as charming as he thinks he is,” yet again, and voice-of-God Freeman faces a conflict specific to paternal protective urges. Yes, Last Vegas jokes about the ravages of age and prescribes tenacity for all that ails us, but I want a cast this great celebrated at least as obviously as The Expendables films. Confuse these guys for better? Show me who. (1:44) (Sara Maria Vizcarrondo)

Let the Fire Burn In 1985 a long-simmering conflict between Philadelphia police and the local black liberation group MOVE came to a catastrophic conclusion. Ordered to leave their West Philly building after numerous neighborhood complaints about unsanitary conditions, incessant noise, child endangerment and more, the commune refused. An armed standoff came to a halt when a helicopter dropped two FBI-supplied water gel bombs on the roof, killing 11 MOVE members (including five kids) and creating an uncontrollable fire that destroyed some 60 nearby homes. It’s hard to deny after watching Jason Osder’s powerful documentary that MOVE then looked like one crazy cult — its representatives spouting extreme, paranoid rhetoric in and out of court; its child residents (their malnutrition-bloated stomachs nonsensically explained as being due to “eating so much”) in visibly poor health; its charismatic leader John Africa questionably stable. But whatever hazards they posed to themselves and the surrounding community, it’s also almost undeniable here that city law enforcement drastically overreacted, possibly in deliberate retaliation for an officer’s shootout death seven years earlier. The filmed and amply media-reported trials that ensued raised strong suspicions that the police even shot unarmed MOVE members trying to escape the blaze. This outrageous saga, with numerous key questions and injustices still dangling, is an American history chapter that should not be forgotten. Let the Fire Burn is an invaluable reminder. (1:35) (Dennis Harvey)

The Pin Canadian film about a romance between two Eastern European youths, in hiding during World War II. (1:23)

The Visitor Directed by “Michael J. Paradise” (aka Giulio Paradisi), this 1979 Italian-US. co-production is belatedly starting to acquire a cult following. Joanne Nail is Barbara, mother of Katy (Paige Conner), a seemingly normal little girl with a disconcerting tendency to swear like a longshoreman when out of ma’s earshot. Also unbeknownst to mom is that her boyfriend (Lance Henriksen, no less), as well as characters played by Mel Ferrer, Glenn Ford, John Huston, Sam Peckinpah, and the inimitable Shelley Winters are all very interested — on the good and the evil side — in Katy, a “miracle of nature” with “immense powers.” Those powers apparently include making Kareem Abdul-Jabbar’s basketball explode at the hoop, and sending teenage boys through plate glass at an ice rink. Some of the adults nosing around Katy really, really want Barbara to give her a similarly gifted baby brother, others do not. It all involves some kind of interplanetary conspiracy to … well, beats me, frankly. Its utter senselessness part of the charm, The Visitor includes any number of bizarre moments, including Winters’ evident enjoyment of slapping some sense into Katy (the child thesp later confirmed that the Oscar winner went a little too Method in that scene), and crusty old Huston intoning the line “I’m, uh, the babysitter.” This glossy sci-fi horror mess. which the Roxie is showing in a new digital transfer, borrows elements freely from 1977’s Exorcist II: The Heretic (a fiasco that inspired very little imitation), 1976’s The Omen (or rather 1978’s Damien: Omen II) and, strangely, Orson Welles’ 1947 The Lady from Shanghai (directly ripping off its famous hall of mirrors scene). Yet there’s a certain undeniable originality to its incoherence. (1:48) Roxie. (Dennis Harvey)