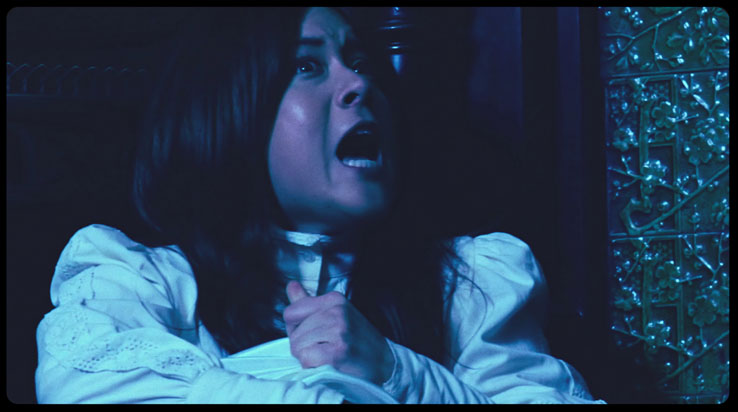 Incredibly, Hollywood is allowing this hallowed weekend to pass without releasing a single horror movie. (Unless you count Jackass Presents: Bad Grandpa, which I don’t.) Frights galore exist in local rep houses, however (right this way for a calendar), and for those who’d simply like turn off the lights, pretend nobody’s home, and eat all the Fun Size Snickers themselves, there’s some non-seasonal fare worth checking out (plus, two of those rep-house chillers!) in the below reviews.

All Is Lost As other reviewers have pointed out, All is Lost‘s nearly dialogue-free script (OK, there is one really, really well-placed “Fuuuuuck!”) is about as far from J.C. Chandor’s Oscar-nominated script  for 2011’s Margin Call as possible. Props to the filmmaker, then, for crafting as much pulse-pounding magic out of austerity as he did with that multi-character gabfest. Here, Robert Redford plays “Our Man,” a solo sailor whose race to survive begins along with the film, as his boat collides with a hunk of Indian Ocean detritus. Before long, he’s completely adrift, yet determined to outwit the forces of nature that seem intent on bringing him down. The 77-year-old Redford turns in a surprisingly physical performance that’s sure to be remembered as a late-career highlight. (1:46) (Cheryl Eddy)

I Am a Ghost In local director H.P. Mendoza’s latest, a young woman named Emily (Anna Ishida) wanders the claustrophobic corridors of a sumptuously decorated Victorian house, repeating her actions in each room in a perfunctory loop: frying eggs, flipping through old photographs, dusting the furniture, stretching in bed. Besides herself, the place initially appears to be uninhabited, until the house begins to creak and groan restlessly around her, and a disembodied voice begins to address her by name. It doesn’t give too much away to reveal at this point that Emily is a ghost, and the voice purportedly that of a professional medium (Jeannie Barroga) who has been hired to assist her out of the house and “into the light.” Unraveling who Emily is and what is keeping her from ascending to the next level takes up most of the rest of the film, and the eerie tension that builds as Emily’s memories return, filling in the unpleasant blanks, explodes at the end with a brutal chaos only otherwise hinted at in earlier scenes. Ishida’s Emily is full of complexity and confusion, and much of the movie’s real “horror” stems from her own sense of powerlessness and realization that the world that she’s inhabiting doesn’t appear to be one rooted in reality, or at least in other people’s realities. Experimental musician and Fringe Festival performer Rick Burkhardt makes a terrifying cameo as the presumed source of Emily’s inability to move on — and speaking of experimental music, the movie’s score, penned by Mendoza, does a lot to create the sense of creeping unease that characterizes most of the film. (1:14) Castro. (Nicole Gluckstern)

Informant Local filmmaker Jamie Meltzer’s complex, compelling Informant makes its theatrical bow at the Roxie a year and a half after it premiered at the 2012 San Francisco International Film Festival (it’s been playing festivals nearly nonstop since). The doc explores the strange life of Brandon Darby, a lefty activist turned FBI informant turned Tea Party operator who helped send two 2008 Republican National Convention protestors to jail. He’s a polarizing guy, but the film, which is anchored by an extensive interview with Darby, invites the audience to draw their own conclusions. (Side note: if you conclude that you want to yell at the screen and give Darby a piece of your mind, chances are you won’t be alone.) (1:21) Roxie. (Cheryl Eddy)

Space Battleship Yamato The year is 2199, five years after mysterious aliens began bombarding Earth with radiation. The scrappy humans who’ve managed to survive by living underground are rapidly dying out — so a crew assembles for a deep-space “journey of hope” to a planet where a “radiation elimination device” might be acquired. Based on a 1974 Japanese anime series (it aired in the US under the name Star Blazers), this live-action adventure contains plenty of CG-enhanced battles and a cast stuffed with stock characters: the gifted, brash young pilot who’s haunted by a dark past (Takuya Kimura, whose flowing locks betray his teen-idol origins); the tough chick who gradually softens (Meisa Kuroki); the grizzled, wise captain (Tsutomu Yamazaki of 2009’s Departures), etc. Fans of the original series may gobble this up, but the casual viewer might find there’s not much to distinguish the overlong Space Battleship Yamato — saddled with a score that vacillates between bombastic and sentimental — from space operas (particularly Battlestar Galactica) that’ve come before. (2:18) Four Star. (Cheryl Eddy)

Spine Tingler! The William Castle Story Other Cinema anticipates Halloween in vintage style with Jeffrey Schwarz’s 2007 documentary about the late, beloved Hollywood schlockmeister. After a mostly undistinguished early career in programmer mysteries, Westerns, and 3D features, William Castle found his métier in the late 1950s making horror thrillers with B budgets (and C scripts) but A-plus marketing gimmicks. Macabre (1958) offered life insurance policies to patrons who might die of fright; the next year’s The Tingler infamously gave patrons in select theater seats slight electric shocks; the same year’s House on Haunted Hill had ushers yank a plastic skeleton over the audience’s heads; Mr. Sardonicus (1961) gave ticket buyers a chance to vote on its title character’s fate. (It was so predictable that they’d vote for mortal punishment, an alternative “happy ending” never actually existed.) Straight-Jacket (1964) had Joan Crawford as a battle-ax axe murderess, a concept that could sell itself. Castle’s perpetual hopes to gain respect and make a “serious” picture were somewhat rewarded by Rosemary’s Baby, even if he wound up merely producing that 1968 smash. (He’d hoped to direct, but was smart enough to realize Roman Polanski was the more inspired choice.) This fond portrait includes input from various Castle collaborators, admirers and family members, as well as plenty of priceless clips. Guest host Christian Divine will offer additional retro horror goodies during this evening of cheap thrills. (1:22) Other Cinema at Artists’ Television Access. (Dennis Harvey)

Torn An explosion at a mall throws two families into turmoil in this locally-shot drama from director Jeremiah Birnbaum and scenarist Michael Richter. Maryam (Mahnoor Baloch) and Ali (Faran Tahir) are Pakistani-émigré professionals, Lea (Dendrie Taylor) a working-class single mother. Their paths cross in the wake of tragedy as both their teenage sons are killed in a shopping center blast that at first appears to have been caused by a gas-main accident. But then authorities begin to suspect a bombing, and worse, the principals’ dead offspring — one as a possible Islamic terrorist, another for perhaps plotting retaliation against school bullies. As the parents suffer stressful media scrutiny in addition to grief and doubt, they begin to take their frustrations out on each other. An earnest small-scale treatment of some large, timely issues, the well-acted Torn holds interest as far as it goes. But it proves less than fully satisfying, ending on a note that’s somewhat admirable, but also renders much of the preceding narrative one big red herring. (1:20) Opera Plaza, Shattuck. (Dennis Harvey)

The Trials of Muhammad Ali If you’ve seen an Ali doc before (or even the 2001 biopic), a lot of the material in The Trials of Muhammad Ali will feel familiar. But Bill Siegel’s lively investigation, which offers interviews with Louis Farrakhan and Ali’s former wife Khalilah, among others, does well to narrow its focus onto one specific — albeit complicated and controversial — aspect of Ali’s life: the boxing champ’s Nation of Islam conversion, name change, and refusal to fight in Vietnam. And as always, the young, firebrand Ali is so charismatic that even well-known footage makes for entertaining viewing. (1:26) (Cheryl Eddy)