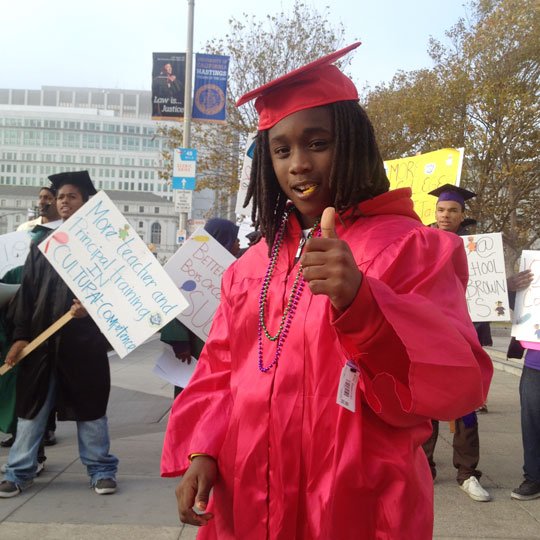 Student activists recognize the familiar path from suspensions to the streets to prisons, and they took to the streets yesterday to push the SFUSD to change its ways. Around 20 or so students and their mentors marched up to City Hall and into the Board of Education to demand a stop of suspensions over willful defiance.

They were dressed in graduation gowns of many colors, signs raised high. They smiled and danced and the mood was infectious. One driver drove by, honked and said “Yes, alright!” Assorted passersby of all ethnicities cheered on the group.

The students were from 100% College Prep Institute, a Bayview tutoring and mentoring group founded in 1999 aiming to educate students of color in San Francisco. Their battle is a tough one. Though African American students make up only 10 percent of SFUSD students, they accounted for 46 percent of suspensions in 2012, according to SFUSD data. Latinos made up the next largest group, at 30 percent.

The SFUSD aims to reduce suspensions of students of color. This chart has been altered for clarity. See it in full here.

“They suspend you for little things, like not taking off your hat. That happens every day at my school,” said Iheem Antone, a 13-year-old seventh grader at the KIPP Bayview Academy, a charter school in the SFUSD system.

Antone isn’t all that tall yet, but had a calmness and bearing that made him seem adult.  He argued for the SFUSD to change its policies.

Notably, KIPP as a charter has its own set of disciplinary rules, but many students there represented many different SFUSD schools.

Kevin Williams, a recent SFSU grad and the organizer of the march, said their grievance wasn’t about whether or not to punish bad behavior, but how that punishment should be carried out.

“We’re not saying there shouldn’t be repercussions for their actions,” he said. “But [students] shouldn’t miss a day of education for it.”

SFUSD has been listening, said Sandra Lee Fewer, the board of education’s vice president. As the marching students filed into the meeting, Fewer told the Guardian that SFUSD instituted its Restorative Practices program last year to put a halt to suspensions over willful defiance.

“We’re making progress, but we need to do better,” she said, noting that suspensions for students of color are still alarmingly high. Kevin Truitt, associate superintendent of SFUSD, said that the practices would take time to implement, and part of the impasse may be a cultural one.

“People have to implement it because they want to and understand it will work, not just because they’re told to,” he said, and although he’s confident that will happen, it will also take time.

Truitt also said that the burden can’t be on the schools alone, and the students will have to modify their behavior. That challenge may also be cultural.

Many students of 100% College Prep Institute have been touched by violence in their communities, said co-founder Jackie Cohen. A school bus driver, she started the institute after she noticed a student stopped riding her bus. When she asked around, she found he fell into what she calls “that life.” So she went looking for him to help change his mind and get him back into school.

“Three days later, I found he was shot and killed,” Cohen said. And her students to this day live in that environment. Truitt said that was one of SFUSD’s biggest challenges. Many of these students are known to have post-traumatic stress disorder, he said, and a normal confrontation can easily escalate into a violent one. The links between neighborhood trauma and childhood PTSD were identified by a Bayview health center.

Truitt told the Guardian that children who have lived in fear, trauma and poverty have a harder time calming down. “It can’t just all be on the schools, we need support,” he said.

Cohen agreed that it was difficult for everyone involved. “I think they have the right intentions, I’m not going to down them for trying,” she said. But  when you have such a high proportion of students of color suspended, she said, something is clearly not working.

In a document titled “Vision: College and Career Ready with 21st Century Skills,” SFUSD laid out a plan to have suspensions of African American students down to 40 percent of all suspensions by 2015, down from 46 percent.

To give credit where credit is due, there are a lot of considerations when implementing restorative justice, and resistance. A state bill that would bar suspensions over willful defiance stalled last month before reaching Gov. Jerry Brown’s desk. AB420, was authored by Assemblymember Roger Dickinson (D- Sacramento), and one of his aides told the Guardian that Dickinson needed more time to reach out to the education community about alternatives to suspension.

Local education activist group Coleman Advocates for Children and Youth pushed hard for the measure, and though they had a representative present and provided statistics to 100% College Prep, their group’s small presence at the march was peculiar.

The college prep students marched into the Board of Education and made themselves heard, decrying the disproportionate number of suspensions of students of color as unjust.

Despite all the challenges facing him, Antone, the seventh grader, was optimistic.

“I’m a math kind of guy,” he said. But someday, he told the Guardian, he’ll be the new San Francisco District Attorney.

Why the DA? “I don’t know, it just seems like an interesting job,” he said, and smiled.

Boys and men of Bayview group stand against excessive suspensions at Board of Ed meeting #sanfrancisco pic.twitter.com/Cp4iU1vlJS

Coleman Advocates for Children and Youth has a community meeting on SFUSD suspensions planned for Oct. 29, from 5-7pm. For more information go to colemanadvocates.org.