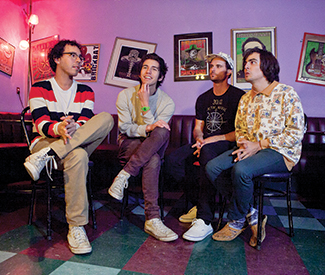 TOFU AND WHISKEY “Us Kids,” the first single off French Cassettes‘ debut full-length Gold Youth (self-released), is a sunny, upbeat slice of San Francisco life. It’s unadulterated indie pop exuberance, the shiny glee of mischievous youth in a extraordinary city under a thick layer of fog.

That sheen might be due to the simple fact that the single — along with all songs on Gold Youth — includes backing tracks of actual kids (read: early 20-somethings) clapping, singing, shouting, rabble-rousing beneath the music.

The basic quartet makeup of French Cassettes is brothers Scott and Thomas Huerta on guitar-vox and bass, respectively; keyboardist-guitarist Mackenzie Bunch; and as of six months ago, drummer James Gallagher. But Gold Youth was a far broader group effort, with early roots spawned in the Central Valley.

The brothers Huerta and Bunch both grew up in sleepy Ripon, Calif., which wouldn’t seem the breeding ground for melodic indie pop compared to the likes of the Strokes and the Generationals. But when French Cassettes began in high school, they gained an early local following in a surprisingly lively Modesto music scene. Eventually, the whole group moved northwest to San Francisco. And as musicians from small towns are wont to do, many of their friends eventually joined them here as well.

It was while living mostly under the same roof — or across the street in a neighboring home — in a house joking dubbed “the Cat House” (thanks to a chunky tabby named Sprout) in the Sunset that French Cassettes spent a year writing and recording Gold Youth. (The record was also recorded partially at Tiny Telephone.)

And during that time, the musicians of French Cassettes would hole up for days perfecting songs, then invite friends over at night under false pretenses.

“We had a lot of musical friends that moved from the Central Valley. They would come and we’d trick them and be like ‘hey, come over and let’s party and drink beer,'” explains Scott, sitting in the back patio of Bottom of the Hill before a French Cassettes headlining show. “We’d get them drunk and be like, ‘you know what we should do?’ and then make our friends sing on the album. We would do it in the middle of us hanging out, so we had to put noise gates on some of the tracks because you can hear people just belligerently talking in the background.”

The record is full of these handclaps and multipart harmonies along with the punchy bass lines and tight rhythms. It’s summer year-round inside Gold Youth, and there’s no shame in the merriment.

It’s clear there’s an intimacy between the members of the band, hanging out on this back patio, giggling nervously and peppering our conversation with inside jokes and exclamations (“excited” is the word most frequently used).

“This is our first band. It’s really comfortable,” Scott says. “It always discourages me when I hear people have been in like, four bands. It just sounds sad to me, I don’t know why.” He laughs.

Scott and Thomas had an early advantage with that closeness — the brothers began playing together at ages 12 and 14, gifted a guitar and a set of drums by their guitar-playing, blues-loving dad. Their mom plays piano and their dad raised them on a diet of Stevie Ray Vaughan, Eric Clapton, the Doors.

“I asked [our dad] why he started playing [guitar] one time and he said he wanted a hobby that he could do while watching TV,” Thomas says. Everyone laughs.

“He’s really good at that,” Scott adds. “He made a new score to Seinfeld episodes. He’d put the TV on mute and play along.”

Rather than rescore sitcoms, the brothers started playing where many aspiring rockers do: with Nirvana covers. Later, when they began French Cassettes in 2006, Scott says they tried going the experimental rock’n’roll path, “being as loud and crazy as we could” before “realizing we wanted to do something more approachable” and breaking into pop tunes.

Those pop songs first turned SF heads after the release of their first official EP, 2011’s Summer Darling. Around then the band starred in a Perez Brothers-directed video for the song “Radley,” off Summer Darling, which hit local blogs thanks to too-cute scenes of them hanging out and drinking beers on the beach with a mermaid. They followed that up a year later by participating in the first annual 48-hour Music Video Race, starring in a ’60s mod-referencing video for “Mouth Drum” by filmmaker Dalan. They also toured to SXSW, playing 12 shows in one week, and hit MusicFestNW in Portland. Last week, French Cassettes played Noise Pop’s California Academy of Sciences’ Treasure Island Nightlife event before Thao & the Get Down Stay Down.

But in August of this year, French Cassettes played their biggest headling show yet, a CD release party for Gold Youth at the Great American Music Hall. It was a big moment for them, and you can tell they’re proud, especially drummer Gallagher.

He joined the band earlier this year but has long been a fan. The trained jazz drummer had been to French Cassettes shows and fell hard for their sound; he jokingly says he pestered himself into the group when the original drummer left. At the time, Gallagher had a roommate who was also a drummer — Rob Mills from Black Cobra Vipers, another local group he’s into. In fact, the whole French Cassettes crew is enamored of Black Cobra Vipers.

“Black Cobra Vipers is my favorite band,” says Bunch. “We played a show with them probably three years ago and ever since then we’ve been like, in love with each other. We’ve had like, a band relationship.”

Starting next week, French Cassettes and Black Cobra Vipers will share the Amnesia monthly residency for the entirety of November. Every Tuesday, they’ll play tracks off Gold Youth, a few new songs, and there’ll “probably be a few tricks up their sleeves,” for they are young, and they are free (but the shows cost $7).

Danish musician Nanna Øland Fabricius (otherwise known as Oh Land) is a Renaissance woman. She’s a producer, a singer-songwriter, a former student of the Royal Danish and Royal Swedish Ballet schools (before an injury nudged her toward music-making). And this is perhaps why “Renaissance Girls,” the first single from her newest full-length Wish Bone (Federal Prism/Tusk Or Tooth) works so well. Like much of Oh Land’s output, it’s musically all over the place, with beats and piano, quick-dropped lyrical phrases and twee girlish high notes. And the video both harkens back to her early dancerly ways and provides a hard/soft dichotomy with interpretative choreography performed by Fabricius herself in Hello Kitty-pink overalls set to the backdrop of a dusty, cement-filled construction site and urban alleyways. With Sun Rai.

DEAL WITH THE DEVIL

Speaking of alleyways…Firstly, there are a few new things you should know about long-running “goofballs of the East Bay punk scene” Bobby Joe Ebola and the Children MacNuggits. The ’95-born act has two new books out through Microcosm Publishing, a comic listen-along book (Meal Deal with the Devil) and a complete discography songbook (The Bobby Joe Ebola Songbook). Both are oddball hilarity at its finest. The Bobby Joe Ebola Songbook contains song lyrics and guitar chords — play along at home! — witty how-to band/life advice, tour anecdotes, and “other bizarre detritus.” Secondly, the band is playing the annual Clarion Alley Block Party this weekend and that should be wall-to-muraled-wall fun. Support DIY punk and an important SF artist-community institution with a full day of live music. With Apogee Sound Club, CCR Headcleaner, Quite Polite, Devotionals, and more.