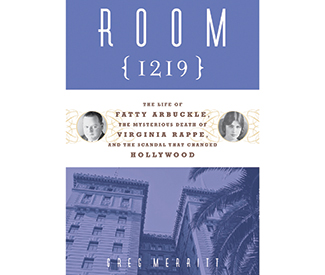 LIT Every student of salacious San Francisco history knows the tale of Roscoe “Fatty” Arbuckle. Over Labor Day weekend in 1921, the silent-film comedian hosted a rager at Union Square’s Hotel St. Francis (now known as the Westin St. Francis), the largest hotel on the West Coast at the time. Starlet Virginia Rappe fell ill at the party, and when she died days later as a result of internal injuries, Arbuckle went on trial (three times) for the crime.

The resulting media frenzy was the first of its kind, a show-biz scandal in the earliest days of movie stars. The public greeted it with both disgust and relentless curiosity. The industry reacted first by shunning Arbuckle — to this day, he’s rarely championed on the level of Buster Keaton or Charlie Chaplin — and then ushering in nearly four decades of the Motion Picture Production Code, “moral” guidelines by which studios self-censored film content.

Delving into l’affaire de Arbuckle is Room 1219: The Life of Fatty Arbuckle, the Mysterious Death of Virginia Rappe, and the Scandal that Changed Hollywood (430 pp., Chicago Review Press, $29.95), Greg Merritt’s page-turner that explores not just the trial, but the often-misunderstood lives of both Arbuckle and Rappe. I called him up to further discuss the book, a must-read for film-history buffs.

SF Bay Guardian Why were you drawn to this story?

Greg Merritt To me, it had always been the ultimate Hollywood scandal. And there just wasn’t a good book that really dealt fairly with the two principals, Arbuckle and Rappe.

SFBG How did Arbuckle’s fame impact his trial?

GM People were just getting to know these movie stars. They saw them in their little towns, up on the big screen. And suddenly, this character that people thought of as a friend — they changed their opinion of him basically overnight. There were headlines calling him a beast. That is paramount to this whole story, that he was one of the first people to experience what it was like to be a movie superstar, and then he was accused of rape and murder.

SFBG What bearing did the Arbuckle case have on the film industry?

GM It stopped his career in 1921, which is huge; we never got to see what he could have done, especially since [at that time] comedy features were a phenomenon that hadn’t really developed yet. And it changed the public’s whole relationship with movie stars. Suddenly, people wanted to know what these stars were really like, not just the PR from the studios. Not just the bad, but what they were really, truly like.

And then probably the most important way that it affected the industry was the wave of movie self-censorship [that followed in its wake]. [The case] received so much condemnation that Hollywood had to censor itself to avoid actual censorship.

SFBG What role did Prohibition play?

GM It was all part of the changing society. This was the beginning of the Jazz Age, a time when women were coming out to nightclubs — before that, public drinking had been kind of a guys’ thing. When this erupted in 1921, a lot of the [outrage] was about how Fatty was at a party with these women who weren’t his wife, and effectively breaking the Prohibition laws, although the laws were complicated about where or when you could drink. It was the Victorian Age versus the Jazz Age — it was kind of the first culture war.

SFBG Was it hard finding information on Virginia Rappe? Why has she been so misunderstood?

GM Surprisingly, it wasn’t hard to find out information about her. She was putting herself out there in the papers, doing interviews when she was a model and a costume designer, and I was able to find out so much about her story.

As for why she was treated so poorly, I think both sides just used her during the case. The press built her up as this innocent, and then the defense did the opposite. Decades afterwards, no one stood up for her, and she was called a slut or a prostitute or whatever. The case was eventually, essentially, blamed on her.

SFBG Why do you think history has distorted so many of the facts of this case?

GM I think the rumors were probably so spectacular that they eventually sort of replaced the facts. Now, when I talk to people, most haven’t heard of Fatty Arbuckle. Or if they have, they only know that he supposedly raped someone with a bottle. That story just took off, and now it seems to be the only thing people know about this case. It’s incredible, because he was the second-biggest movie star at the time after Charlie Chaplin. People ask me, “Can you imagine a scandal being this big today?” It’s really hard to imagine someone so hugely popular being accused of murder today. O.J. Simpson wasn’t Fatty Arbuckle, you know. It just doesn’t compare. *