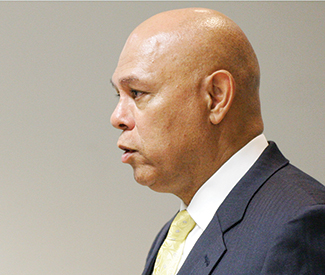 Former Compton Community College Special Trustee Dr. Arthur Q. Tyler was formally announced as City College of San Francisco’s new chancellor on Oct. 16. The decision ends a months-long search and comes at a time when CCSF is under state control and facing the loss of its accreditation.

As everyone fears for the future of City College, the key to understanding its new chancellor may lie in his history with similarly troubled community colleges, and to CCSF’s own turbulent history.

City College is in the fight for its life as the deadline of July 2014 looms, at which point the Accrediting Commission of Community and Junior Colleges says it will revoke CCSF’s accreditation. But Tyler has been in a similar position before, in Compton.

Tyler held the same position overseeing the troubled Compton Community College that Special Trustee Bob Agrella held as CCSF lost its accreditation. But more importantly, Tyler was at the helm when it was told its accreditation was revoked in 2005.

In a letter to the community, Compton’s Board of Trustees outlined what they’d need to do: regain their footing and win an appeal to the accreditation commission. They filed for review, much like City College of San Francisco recently did. And they lost.

Compton Community College never regained its accreditation. It was absorbed into a neighboring district, El Camino College, and is now known as The El Camino Compton College Center, essentially another campus in the El Camino system.

“They had problems with integrity,” he said at the Oct. 16 press conference, addressing Compton’s failure under his watch. “It was a different situation.”

Tyler is now tasked with saving San Francisco’s only community college. At the ceremony, Tyler was told that he’d be held liable for CCSF’s future.

“Dr. Tyler, you have many people here, whether they’re students, faculty, staff, and administrators… to stand behind you as you take on this important responsibility,” said Hydra Mendoza, Mayor Ed Lee’s education advisor. “We’re also here to hold you accountable.”

After CCSF was notified it would lose accreditation in a year, the state gave Agrella the full powers of City College’s Board of Trustees, leaving San Francisco’s elected board powerless.

Just exactly how much power and influence Tyler will have while the state-appointed trustee remains at City College is still a mystery. But then again, the history of leadership of CCSF has been cloaked in secrecy and dubious dealings.

Former Chancellor Philip Day was head of City College in 1998, and he left under a criminal indictment, pleading guilty and later convicted of misuse of $100,000 of college funds. His chancellorship ended in 2008, but his scandal was not his only contribution to the school.

“In a lot of ways he was a great chancellor. He had some vision,” Fred Teti, who was City College’s Academic Senate president under Day, told the Guardian.

Day was a divisive figure, and the politics around him has split the college to this day. Teti said that rightly or wrongly, Day’s legacy was mainly tied to the construction boom at City College.

“When the state Legislature passed (a law allowing) bonds for schools, he jumped on it immediately. It was really him that got all those buildings up,” Teti said.

The construction boom built the college’s new Multi-Use Building, and the towering Chinatown Campus. Many we talked to attributed this to Day’s coalition style leadership, bringing together disparate groups of the college to a single purpose.

It was also what led him to falter, as Day’s misuse of funds conviction was directly centered around funding he was using to promote more bonds for City College. He put laundered district money into an ad campaign for a facility related bond measure, and he was caught.

Even after Day was gone, the legacy of bitter divisions among trustees and lack of proper fiscal checks-and-balances that Day fostered contributed to CCSF’s downward spiral — and now, the hiring of a hobbled new chancellor to try to pick up the pieces.

Tyler may not have the chance to enact his own City College vision for awhile, and when asked at his introduction to the school “What can and will you do here?” he said “I’ll make recommendations to the board, in this case to Dr. Agrella, on the things we believe… will heal and fix this institution.”

Former City College administrator Stephen Herman, who shared a criminal conviction with Day over the misuse of district funds, told us that Tyler will have few powers until Agrella steps aside.

“Dr. Tyler is going to be a little hamstrung to begin with,” Herman said. “Ultimately, if the college gets its accreditation and is able to survive, then (Tyler) can spread his wings and take over some policy decisions.”

But the history around Tyler’s policy decisions are equal parts heartening and worrisome.

Tyler was charming and self-effacing at his press conference, saying “I’m privileged to stand before you as your new chancellor,” building on what he called “the legacy” that the interim-chancellor Thelma Scott-Skillman will leave for him: “I know I’m filling a large pair of lady shoes.”

Tyler’s resume seems to glow. He’s an anti-terrorism expert who served in the US Air Force, was vice president at Los Angeles City College, and was in charge at Sacramento City College. He also speaks Farsi.

One gold mine of documents he obtained came when the Harris County District Attorney’s Office was investigating alleged corruption at HCC. Family members and friends allegedly helped questionable construction contracts get approved by the HCC Board of Trustees, according to the Houston Chronicle’s stories at the time.

Ultimately, those accused had to take ethics training courses, but it’s the investigation itself that’s really revealing.

Law Firm Smyser Kaplan & Veselka interviewed college officials at the behest of HCC’s board in 2010. Its goal was to get to the bottom of who had anything to do with getting the dirty contracts passed. Houston Community College’s attorney turned investigator, Larry Veselka, interviewed Tyler as part of this investigation and Wilson obtained Veselka’s notes.

When looking into a construction project, Tyler told Veselka he found about $14 million in questionable spending. The interview details allegations that Tyler was receiving vague promises of sexual favors and bribes from a pair of would-be contractors, which he refused.

Veselka would not return phone calls from the Guardian, but the Harris County District Attorney’s Office, which was involved in the investigation of Houston Community College, confirmed that it had documents regarding the college from Veselka’s law firm but would not release them to the Guardian.

The documents paint a rosy picture of Tyler, who cleaned house, and even claimed to have shrugged off shady dealers at Houston Community College.

“I can tell you I did speak to the law firm,” Tyler said when the Guardian asked him about the alleged attempted bribe. “Because that was a violation of trust. Anyone who knows anything about me can confirm that I’ve been about trusting my own instincts about what’s right and what’s wrong. It’s a keynote of my value set that I will never compromise, now and in the future.” But in the same documents that confirmed Tyler talked to attorneys about the alleged bribe, one trustee was concerned enough about Tyler’s close relationship with another trustee that Tyler’s future authority regarding contracts was limited. And while different news outlets reported that Tyler resigned from Houston Community College, that’s not exactly the story the Houston Chronicle told in July. “The trustees agreed Thursday to a settlement with Deputy Chancellor Art Tyler for $600,000, confirmed his attorney, Vidal Martinez. Tyler relinquished all duties Friday,” the paper wrote. “Art is part of the old chancellor’s team. This was part of finishing the past,” Vidal Martinez, Tyler’s attorney, told the Houston Chronicle. Ultimately, they reported, the buyouts of the two administrator’s contracts cost Houston Community College over a million dollars. Tyler would not return follow-up phone calls on the matter. When asked if he was worried about Tyler’s history, CCSF Board President John Rizzo said that none of it came up in the chancellorship interviews — but even if there was truth to it, he wasn’t worried. “He’s going to have a lot of eyes on him,” Rizzo said. “He’ll have the state chancellor and special trustee looking over his shoulder, more than a normal chancellor would.”