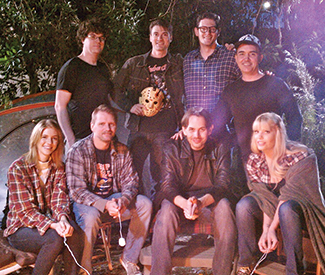 “A seven-hour documentary about a horror franchise?” I said. “Gotta get my mitts on that!”

Seven and some odd hours later, I was on the phone with the Los Angeles-based Daniel Farrands for my own interview with the Crystal Lake Memories director. Farrands, whose previous docs include 2010’s Never Sleep Again: The Elm Street Legacy and 2009’s His Name Was Jason: 30 Years of Friday the 13th, was as stoked about the Times piece as you’d expect.

“I was really honored and sort of surprised that they were interested,” he says. “It’s a coup for our little slasher show that could.”

Any student of the Friday the 13th series can understand Crystal Lake Memories‘ running time. It covers the entire hockey-masked enchilada: 10 Friday films, late-1980s TV curio Friday the 13th: The Series, 2003’s Freddy vs. Jason, and the 2009 Friday remake. Frankly, it’s surprising Farrands was able to cram the whole thing into 400 minutes.

“It’s amazing to me that we got it down to that length,” he agrees. “We had hundreds of hours of interviews that we had to cut. And there are always those stories you wish you could have told, but for some reason they didn’t really work within the narrative as it’s developing.” (To that end, he adds, true diehards who early-ordered the straight-to-DVD/Blu-ray title through its official website — www.crystallakememories.net — got an additional disc containing four more hours of bonus material. You can still buy the film there, but not the bonus disc.)

It goes without saying that you should probably view the Friday series before checking out the doc. Why attempt the epic experience of watching Crystal Lake Memories if you’re not already a confirmed Jason Voorhees freak?

“The Friday the 13th franchise has been around since 1980 and has amassed a huge and loyal fan following,” Farrands says. “[Crystal Lake Memories] is unabashedly intended for them. That being said, we really wanted it to be something that would be of interest even to the non-horror crowd — if you’re into cinema, and [interested in] what it takes to make a low-budget film. This film and our four-hour retrospective on the Nightmare on Elm Street series, Never Sleep Again, are kind of film-school courses in the form of horror documentaries. There’s so much interesting stuff in there in terms of being in the [low-budget filmmaking] trenches; our edict was to tell the real stories about making these kinds of films.”

Crystal Lake Memories tracks down some 160 cast and crew members spanning the Friday series (Betsy Palmer, the veteran actor who played Mrs. Voorhees in the original film, grins as she remembers reading the script and thinking “What a piece of junk!”). Many of the thespian interviewees are still unknowns, but several cult favorites — including special effects makeup pioneer Tom Savini, series creator Sean S. Cunningham, and prolific producer Frank Mancuso Jr. (Farrands’ longtime mentor) — stop by to share memories. Corey Feldman, who appeared in 1984’s Friday the 13th: The Final Chapter during the height of his child-star days, narrates the film.

One notable omission: Kevin Bacon, whose gruesome fate in the first Friday came years before he broke out in 1984’s Footloose.

“Recently, he appeared on the Tonight Show and he talked all about Friday the 13th,” Farrands says. “So he’s not ashamed of it, necessarily. But unfortunately, while we were conducting our interviews, we couldn’t make it work with his schedule. But we tried, and they tried! I think people have this misunderstanding that some of these bigger stars are embarrassed by it, and that’s just not true. I mean, Johnny Depp wasn’t ashamed that he was in A Nightmare on Elm Street (1984).”

Farrands’ own résumé is filled with horror-related credits. Just a smattering: he wrote the screenplay for 1995’s Halloween: The Curse of Michael Myers; directed multiple History’s Mysteries episodes on the Amityville phenomenon; and is developing a TV show set “in the universe of Jason Voorhees” called Crystal Lake Chronicles. His earlier Friday doc, His Name Was Jason, was a 90-minute work that “focused on Jason Voorhees as a pop-culture icon,” he says.

For Crystal Lake Memories, “we wanted to sequentially chronicle the making of the entire series.” It does make use of some Jason footage, particularly outtakes from interviews conducted for that film. But, “we did 60-some new interviews for this film that were not in Jason.“

Fresh faces include Dana Kimmell, star of 1982’s Friday the 13th Part III, and Jennifer Cooke, star of Jason Lives: Friday the 13th Part VI. “[Cooke] has literally never spoken of her experience with the film other than, I think, one article back in 1986 when the film was made. It took a lot of convincing to get her to go on camera. But she was very nice and gave us a terrific, in-depth interview.”

As you might suspect, the actors’ recollections tend to revolve around their death scenes — achieved, in the pre-CG era, via the wizardry of artists like Savini, who made Friday‘s signature gore as outrageous as possible.

“The Friday the 13th violence was very in-your-face. The violence in Halloween (1978) was kind of subdued, and suggested, more like Psycho (1960). Friday the 13th took it to the next level. People walked out, like, ‘How did they do that?’ The audaciousness of what they pulled off, and the fact that the film was released by a major studio and put on 1,600 screens at the time — it just hadn’t been done. So I think that’s why Friday the 13th was kind of a watershed film.”