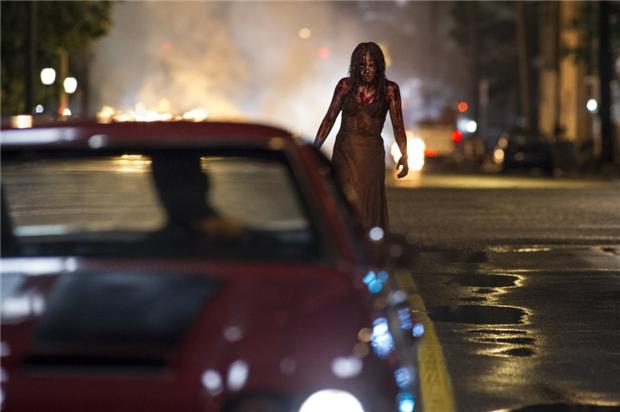 This week’s fare includes a thoughtful doc about the debate over late-term abortions, Benedict Cumberbatch’s star turn as Julian Assange, the Carrie remake, and more.

After Tiller Martha Shane and Lana Wilson’s After Tiller is incredibly timely, as states like Texas and North Carolina continue to push forth increasingly restrictive abortion legislation. This doc focuses on the four (yes, only four) doctors in America who are able to perform late-term abortions — all colleagues of Dr. George Tiller, assassinated in 2009 by a militant anti-abortionist. The film highlights the struggles of what’s inherently a deeply difficult job; even without sign-toting (and possibly gun-toting) protestors lurking outside their offices, and ever-shifting laws dictating the legality of their practices, the situations the doctors confront on a daily basis are harrowing. We sit in as couples make the painful decision to abort babies with “horrific fetal abnormalities;” a rape victim feels guilt and relief after terminating a most unwanted pregnancy; a 16-year-old Catholic girl in no position to raise a child worries that her decision to abort will haunt her forever; and a European woman who decides she can’t handle another kid tries to buy her way into the procedure. The patients’ faces aren’t shown, but the doctors allow full access to their lives and emotions — heavy stuff. (1:25) Roxie. (Cheryl Eddy)

Broadway Idiot “I can’t act, I can’t dance … compared to a lot of these people, I can’t even sing,” Green Day’s Billie Joe Armstrong admits, moments before he’s seen taking the Broadway stage in the musical based on his band’s American Idiot. (He played the character of St. Jimmy for stints in both 2010 and 2011.) Director Doug Hamilton’s doc mixes concert, rehearsal, and full-on musical footage; interviews (with Armstrong, show director Michael Mayer, music supervisor Tom Kitt, and others); and behind-the-scenes moments to trace the evolution of American Idiot from concept album to Broadway show. Fans will feast on those behind-the-scenes moments, as when the band stops by Berkeley Rep — where the show had its pre-Broadway workshop performances — to hear new arrangements of their songs for the first time, or cast members prep to perform with Green Day at the Grammys. For everyone else, Broadway Idiot offers a slick, energetic, but not especially revealing look at the creative process. Good luck getting any of those catchy-ass songs out of your head, though. (1:20) Vogue. (Cheryl Eddy)

Carrie A high-school outcast (Chloë Grace Moritz) unleashes hell on her bullying classmates (and her controlling mother, played by Julianne Moore) in Kimberly Peirce’s take on the Stephen King classic. (1:32)

Concussion Robin Weigert (Deadwood, Sons of Anarchy) stars in this tale of a lesbian housewife who pursues a new career as a prostitute after suffering a bump on the head. (1:36)

The Fifth Estate After being our guide through the world of 1970s Formula One racing in Rush, Daniel Brühl is back serving that same role — and again grumbling in the shadows cast by a flashier character’s magnetism — for a more recent real life story’s dramatization. Here he’s German “technology activist” Daniel Domscheit-Berg, who in 2007 began collaborating with the enigmatic, elusive Julian Assange (Benedict Cumberbatch) on WikiLeaks’ airing of numerous anonymous whistleblowers’ explosive revelations: US military mayhem in Afghanistan; Kenyan ruling-regime corruption; a Swiss bank’s providing a “massive tax dodge” for wealthy clients worldwide; ugly truths behind Iceland’s economic collapse; and climactically, the leaking of a huge number of classified U.S. government documents. It was this last, almost exactly three years ago, that made Assange a wanted man here and in Sweden (the latter for alleged sexual assaults), as well as putting US Army leaker Chelsea (née Bradley) Manning in prison. The heat was most certainly on — although WikiLeaks was already suffering internal woes as Domscheit-Berg and a few other close associates grew disillusioned with Assange’s megalomania, instability, and questionable judgment. It’s a fascinating, many-sided saga that was told very well in Alex Gibney’s recent documentary We Steal Secrets: The Story of WikiLeaks, and this narrative feature from director Bill Condon and scenarist Josh Singer feels disappointingly superficial by contrast. It tries to cram too information in without enough ballasting psychological insight, and the hyperkinetic editing and visual style intended to ape the sheer info-overload of our digital age simply makes the whole film seem like it’s trying way too hard. There are good moments, some sharp supporting turns, and Estate certainly doesn’t lack for ambition. But it’s at best a noble failure that in the end leaves you feeling fatigued and unenlightened. (2:04) (Dennis Harvey)

Vinyl When the surviving members of a long-defunct, once-popular Welsh pop punk outfit reunite for a less lucky member’s funeral, the squabbles that have kept them incommunicado for decades are forgotten — with the help of lots of alcohol. They even jam together, and lo and behold, the hungover next morning reveals recorded evidence that they’ve still “got it.” In fact, they’ve even thrown together an insanely catchy new song that would be a perfect comeback single. Only trouble is, when they shop it around to record companies (including their own old one), they’re invariably told that no matter how good the music is, audiences today don’t want old fogeys performing it. (That would be “like watching your parents have sex,” they’re told.) The all-important “tweens to twenties” demographic wants stars as young as themselves, only hotter. So Johnny (Phil Daniels) and company have the bright idea of assembling a quintet of barely-legal cuties to pose as a fake band and lipsynch the real band’s new tune. Needless to say, both take off like wildfire, and eventually the ruse must be exposed. Sara Sugarman’s comedy is loosely inspired by a real, similar hoax (pulled off by ’80s rockers the Alarm), and might have dug deeper into satire of an industry that has seldom deserved mocking evisceration more than it does now. Instead, Vinyl settles for being a brisk, breezy diversion, likable if a bit formulaic — though that single, “Free Rock ‘n’ Roll,” really is catchy in an early Clash-meets-Buzzcocks way. (1:25) Roxie. (Dennis Harvey)

Zaytoun It’s 1982 in war-torn Beirut, and on the semi-rare occasion that streetwise 12-year-old Palestinian refugee Fahed (Abdallah El Akal) attends school, he’s faced with an increasing number of empty desks, marked by photos of the dead classmates who used to sit there. His own father is killed in an airstrike as Zaytoun begins. When an Israeli pilot (Stephen Dorff — a surprising casting choice, but not a bad one) is shot down and becomes a PLO prisoner, Fahed’s feelings of hatred give way to curiosity, and he agrees to help the man escape back to Israel, so long as he brings Fahed, who’s intent on planting his father’s olive sapling in his family’s former village, along. It’s not an easy journey, and a bond inevitably forms — just as problems inevitably ensue when they reach the border. Israeli director Eran Riklis (2008’s Lemon Tree) avoids sentimentality in this tale that nonetheless travels a pretty predictable predictable path. (1:50) (Cheryl Eddy)

Zero Charisma Scott (Sam Eidson) is a raging nerd, of the staunchly old-school variety: he lives for the sacred ritual of “game night,” where as Game Master he guides his minions through Dungeons & Dragons-style fantasy role-playing. His hobby, which is really more of a lifestyle, is the only thing he really likes; otherwise, he’s a self-described “loser,” in his late 20s but still living with his grandmother (a delightfully acidic Anne Gee Byrd) and working a crappy job delivering tacos and donuts, sometimes to his former co-workers (who all hate him) at a game shop straight out of The Simpsons. When “cool” nerd (and insufferable hipster) Miles (Garrett Graham) joins Scott’s game and threatens his fantasy world — at the exact moment his long-lost mother (Cyndi Williams) swoopes in, intent on selling Nana’s house out from under her — chaos reigns. Writer Andrew Matthews (who co-directed with Katie Graham) clearly knows Scott’s world well; the scenes revolving around gaming (“But we’re almost to the hall of the goblin queen!”) are stuffed with authentic and funny nerd-banter, and while Scott himself is often mocked, RPGs are treated with respect. Scott’s personal journey is a little less satisfying, but Zero Charisma — an Audience Award winner at SXSW — has at least as much quirky appeal as a pair of multi-sided dice. (1:27) Roxie. (Cheryl Eddy)