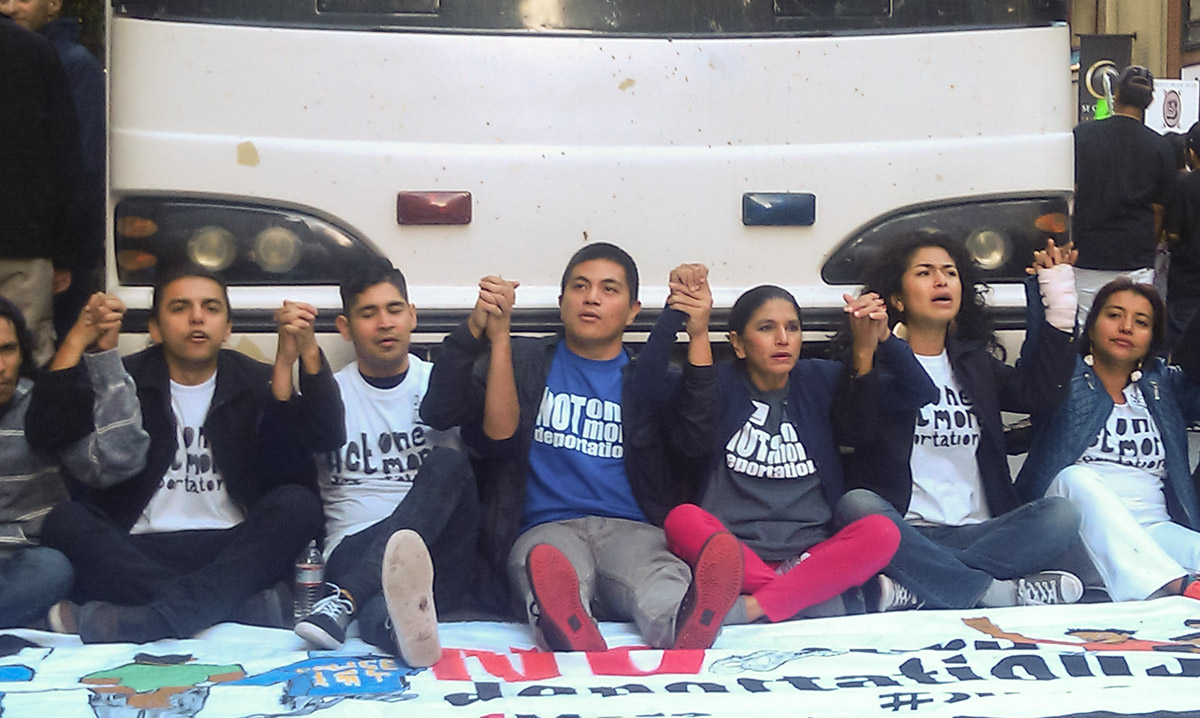 A group of young, undocumented immigrant activists temporarily halted a deportation bus from leaving downtown San Francisco on Oct. 17. The bus was parked outside Immigration and Customs Enforcement offices at 630 Sansome Street, where detainees are held during the day while they await court hearings.

They said they were inspired by recent actions in Arizona, and were putting themselves at risk to send a message to President Barack Obama that all deportations should be halted until federal immigration reform is in place.

Even though federal immigration police threatened them with felony charges if they did not allow the bus to pass, activists decided after an intense discussion to stay seated on the street where they were and continue their protest.

“We will do whatever is necessary for our community,” protester Alex Aldana said into a megaphone after the group huddled to discuss how to respond to the threat, adding that they would risk arrest.

They chanted “undocumented, unafraid,” and at one point even taped a hot pink sign to the front of the bus that read, “Shut Down ICE.” Supporters circled the bus in a procession, waving signs and chanting, until authorities set up a police line and told them that they would risk arrest if they did not move to the sidewalk. There were federal immigration officials as well as San Francisco police officers on the scene.

At one point, ICE officials told the activists that the protesters could be charged with felony false imprisonment if they did not get up and move. But in the end, federal officers merely escorted them away from the bus and released them on the sidewalk around the corner.

Organizations involved included the California Immigrant Policy Center, POWER, Causa Justa / Just Cause, the Asian Law Caucus, ASPIRE and others who are part of a coalition that has been focused on immigration reform.

“When they talked to me, they said they were going to arrest me,” said Emmanuel Valenciano, one of the activists who blocked the bus, after being released. He added that he had expected the San Francisco Police Department to take them into custody.

The passengers on the bus were not visible to protesters and bystanders, but Asian Law Caucus Staff Attorney Anoop Prasad had met with some of them earlier that day. They were from Russia, El Salvador, Ethiopia and other countries. Many had been swept into ICE custody after being identified via Secure Communities (S-Comm), an information-sharing program that links local law enforcement information with federal databases.

Some of the bus passengers were bound for the airport, where they would begin long deportation journeys. Others were headed back to ICE detention facilities throughout California, where they would remain while fighting their cases.  All of the detainees had their hands and waists in shackles, Prasad said.

Once the protesters were escorted off the scene and released, the bus backed up and continued on its way.