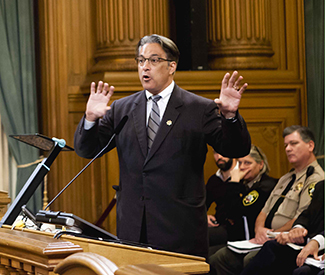 Should San Francisco spend $290 million on a modernized jail to replace the old ones that will be demolished when the Hall of Justice comes down?

That’s been the plan for years, but the Board of Supervisors Budget & Finance Committee started to ponder that question at its Oct. 9 meeting, setting the stage for a larger debate that hinges on questions about what it means to take a progressive approach to incarceration.

The Department of Public Works, in collaboration with the Sheriff’s Department, is preparing to submit a state grant application for $80 million to help offset the cost of rebuilding County Jails 3 and 4, outmoded facilities that are located on the sixth and seventh floors of the Hall of Justice.

That building is seismically vulnerable, and slated to be razed and rebuilt under a capital plan that has been in the works for the better part of a decade. With a combined capacity of 905 beds, Jails 3 and 4 were built in the 1950s and are in deplorable condition.

At the hearing, when supervisors considered whether to authorize the $80 million grant application, Sheriff Ross Mirkarimi said the current state of affairs is so bad that his department had to convert a bathroom to a visitation area because there was nowhere else for inmates to spend time with their kids in the same room. In other areas of the jail, temporarily vacant holding cells sometimes double as classroom space, since the department lacks dedicated areas for conducting classes.

The new jail would be built with somewhere between 481 and 688 beds, based on a lower calculated projected need, and more space would be devoted to programs like substance abuse education, parenting programs, or counseling.

San Francisco currently has five jails, but only one — a San Bruno facility built in 2006 — has what the Sheriff’s Department considers to be adequate space for rehabilitative services. Inmates there can opt to earn a high school diploma or take a course in meditation, and the department wants to build on that design in the new facilities.

Mirkarimi urged committee members to sanction the funding request as a first step toward that goal. “Whether it’s parenting programs or something that goes much deeper, then we need that space to make it happen,” he said.

At the same time, some community advocates questioned the very premise of spending millions on a new jail, arguing that scarce public resources could be better spent on services to prevent people from winding up in the criminal justice system to begin with.

In late August, the American Civil Liberties Union and the Lawyers’ Committee for Civil Rights of the San Francisco Bay Area called for the plan to be reexamined. “We agree that Jails 3 and 4 in the Hall of Justice should be torn down,” they wrote, “[but] we question the need to replace them with a new facility.”

Micaela Davis, criminal justice and drug policy attorney at the ACLU of Northern California, told the Guardian that advocates are seeking to reframe the debate by questioning why a new jail should even be built, rather than focusing on what kind of jail should replace the old ones.

She and other advocates are pushing for the county to explore alternatives to jailing arrestees who haven’t yet gone to trial, or look at ways of reorganizing housing for existing inmates. Given that the jail has been in the capital plan for so many years, she said, “it just seems necessary to reevaluate before moving forward with this project.”

While Sup. David Campos hasn’t taken a position so far, he submitted a request at the Oct. 1 board meeting for a hearing “to have an open discussion about what is being proposed, and to really examine if what is proposed makes sense,” he said. It’s expected to take place in early December at the Neighborhood Services and Safety Committee.

If San Francisco is awarded the $80 million in state funding, it must agree to dedicate $8.9 million of its own funds toward the project, which would be spent on preliminary designs, studies, environmental review, and other early costs, according to a board resolution approving the request.

Speaking at the Oct. 9 committee hearing, Sup. John Avalos responded to activists’ concerns by saying: “The last thing I want to do is build out the prison industrial complex. … I’ve always wanted to make sure we were minimizing what would lead to incarceration of more people.” While he did support the idea of applying for the grant, he did so with a caveat. “I would certainly want to uphold the right to vote against a jail in the future,” Avalos said.

Sup. Eric Mar, on the other hand, would not consent to allowing the funding request. “I can’t, under clear conscience, support this,” he said. In the end, the committee authorized the grant application with Avalos and Sup. Mark Farrell supporting it, and Mar opposed.