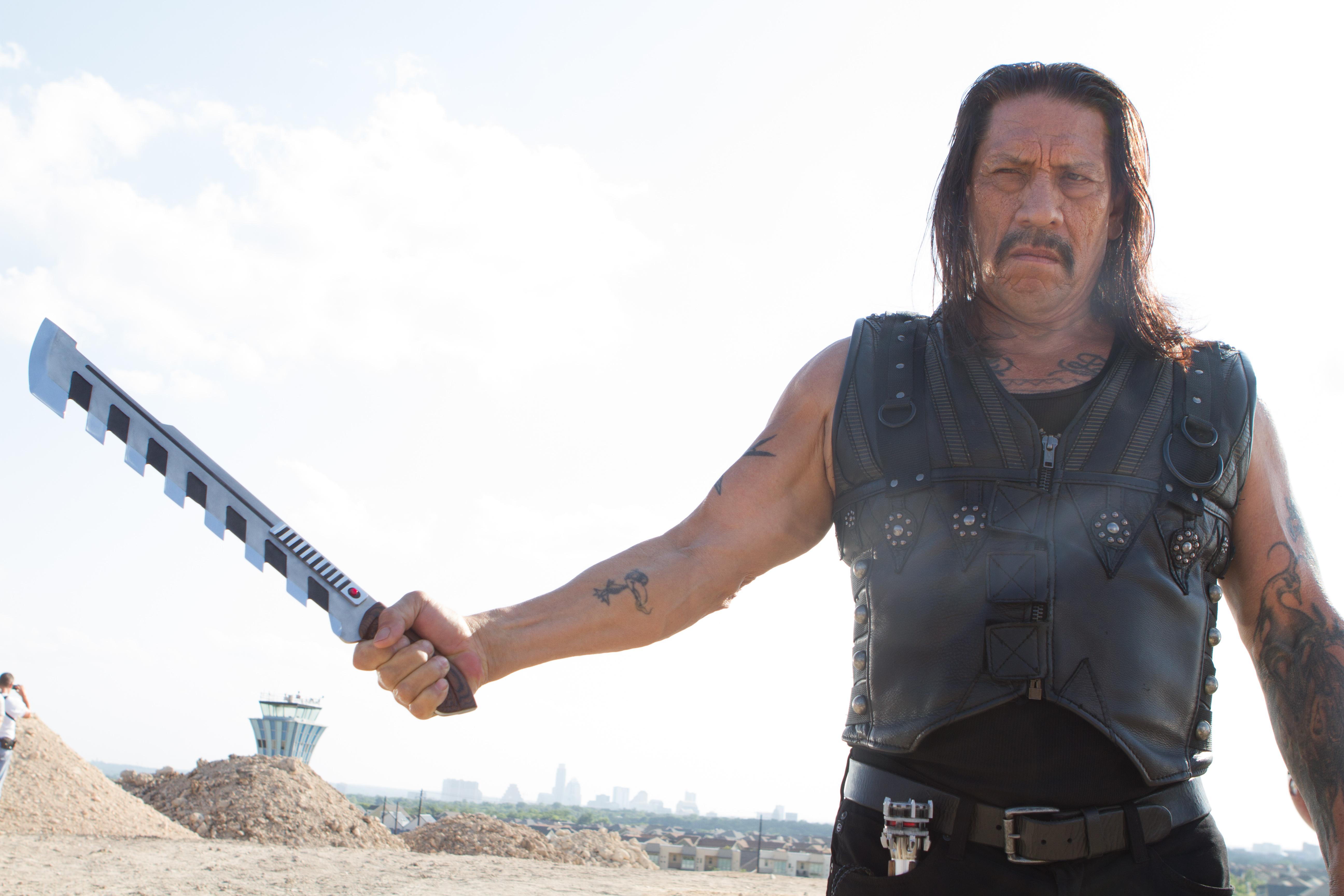 First things first: do not pass go or collect your turkey leg until you’ve seen Escape From Tomorrow, the shot-secretly-at-Disney sci-fi drama that will, in fact, blow your mind. Dennis Harvey’s review here. (Speaking of mind-blowing, have you seen Gravity yet? If not, why are you still reading this? Why aren’t you rushing to the theater RIGHT NOW?)

Elsewhere this week: two powerful tales of survival are told in doc The Summit and Paul Greengrass’ Captain Phillips, which stars Tom Hanks and will make you glad your job doesn’t require you to traverse pirate-infested shipping lanes. My reviews of both here.

A.C.O.D. When happy-go-lucky Trey (Clark Duke) announces rather suddenly that he’s getting married, cranky older bro Carter (Adam Scott), the Adult Child of Divorce of the title, is tasked with making peace between his parents (Richard Jenkins and Catherine O’Hara). Trouble is, they haaaate each other (Jenkins: “If I ever see that woman, I’m gonna kick her in the balls”) — or so Carter thinks, until he discovers (to his horror) that there’s long-dormant passion lurking beneath all the insults. He also discovers that he was part of a book about kids of divorce written by a nutty PhD (Jane Lynch), and is drawn into her follow-up project — through which he meets fellow A.C.O.D Michelle (Jessica Alba, trying way too hard as a bad girl), a foil to his level-headed girlfriend (Mary Elizabeth Winstead). As the life he’s carefully constructed crumbles around him, Carter has to figure out what really matters, blah blah. Stu Zicherman’s comedy (co-scripted with Ben Karlin; both men are TV veterans) breaks no new ground in the dysfunctional-family genre — but it does boast a cast jammed with likable actors, nimble enough to sprinkle their characters’ sitcom-y conflicts with funny moments. Amy Poehler — Scott’s Parks and Recreation boo — is a particular highlight as Carter’s rich-bitch stepmother, aka “the Cuntessa.” (1:27) (Cheryl Eddy)

American Jerusalem: Jews and the Making of San Francisco Documentary about the Jewish experience in San Francisco. (:57) Vogue.

Machete Kills Herewith we have the first sequel to a film (2010’s Machete) spawned from a fake trailer (that appeared in 2007’s Grindhouse). Danny Trejo’s titular killer has been tasked by the POTUS (Charlie Sheen, cheekily billed by his birth name, Carlos Estevez) to take down a Mexican madman (Demian Bechir) who’s an enemy of both his country’s drug cartels and the good ol’ USA. But it’s soon revealed (can you have plot spoilers in a virtually plotless film?) that the real villain is weapons designer Voz (Mel Gibson), a space-obsessed nutcase who’d fit right into an Austin Powers movie. The rest of Machete Kills, which aims only to entertain (with less social commentary than the first film), plays like James Bond lite, albeit with a higher, bloodier body count, and with famous-face cameos and jokey soft-core innuendos coming as fast and furious as the bullets do. As always, Trejo keeps a straight face, but he’s clearly in on the joke with director Robert Rodriguez, who’d be a fool not to continue to have his exploitation cake and eat it too, so long as these films — easy on the eyes, knowingly dumb, and purely fun-seeking — remain successful. (1:47) (Cheryl Eddy)

Mother of George Fashion photographer and music video director Andrew Dosunmu’s second feature opens with one of the most rapturous setpieces in recent cinematic memory: a wedding ceremony and banquet in Brooklyn’s Nigerian expat community so sensuously rich it washes over the viewer like a scented bath. Afterward, restauranteur Adoydele (Isaach De Bankole) and his younger immigrant bride Adenike (Danai Gurira) live in a connubial bliss increasingly compromised by the pressure on her to bear children. When that doesn’t happen, it could be either party’s biological “fault;” but tradition and an imperious mother-in-law (Bukky Ajayi) place blame firmly on Adenike’s shoulders, till the latter considers a desperate, secret solution to the problem. Like Dosunmu and his cinematographer Bradford Young’s 2011 prior feature Restless City, this followup is so aesthetically transfixing (not least its Afropop soundtrack) you can easily forgive its lack of equally powerful narrative impact. Someday they’ll make a movie that works on both levels — but meanwhile, Mother of George is gorgeous enough to reward simply as an object of sumptuous beauty. (1:47) Opera Plaza, Shattuck. (Harvey)

Muscle Shoals Hard on the heels of Dave Grohl’s Sound City comes another documentary about a legendary American recording studio. Located in the titular podunk Northern Alabama burg, Fame Studio drew an extraordinary lineup of musicians and producers to make fabled hits from the early 1960s through the early ’80s. Among them: Percy Sledge’s “When a Man Loves a Woman,” a slew of peak era Aretha Franklin smashes, the Rolling Stones’ “Brown Sugar,” and those cornerstones of Southern rock, Lynyrd Skynyrd’s “Freebird” and “Sweet Home Alabama.” Tales of how particular tracks came about are entertaining, especially when related by the still-lively likes of Etta James, Wilson Pickett, and Keith Richards. (Richards is a hoot, while surprisingly Mick Jagger doesn’t have much to say.) Director Greg Camalier’s feature can be too worshipful and digressive at times, and he’s skittish about probing fallouts between Fame’s founder Rick Hall and some long-term collaborators (notably the local in-house session musicians known as the Swampers who were themselves a big lure for many artists, and who left Fame to start their own successful studio). Still, there’s enough fascinating material here — also including a lot of archival footage — that any music fan whose memory or interest stretches back a few decades will find much to enjoy. (1:51) (Dennis Harvey)

Romeo and Juliet Every director sees the star-crossed lovers differently: Zefferelli’s apporach was sensuous, while Luhrmann’s was hip. Carlo Carlei, director of the British-Swiss-Italian production hitting theaters this week, is so hamstrung by the soapy mechanics of the Twilight series and the firmament of high school productions he fails to add much vision — what he does instead is pander to tweens as much as possible. Which means tweens might like it. Hailee Steinfeld makes Juliet’s foolishness seem like the behavior of a highly functional teenager, while Douglas Booth’s chiseled Romeo can’t help resembling a cheerful Robert Pattinson. Juliet’s maid has never been more memorable than Leslie Mansfield and Paul Giamatti is occasionally not self-consciously Paul Giamatti as the cunning friar. Yet the syrupy score is miserably persistent, and the sword fights are abundant and laughable. Tybalt (Gossip Girl’s Ed Westwick) leads a group that walks in slo-mo, hats flopping behind them. Carlei wrongheadedly stages the double suicide to resemble Michelangelo’s Pietà, but Romeo and Juliet aren’t martyrs for our fantasies, they’re the Adam and Eve of young love. Cinematic adaptations should remind you they’re original, but this Romeo and Juliet simply doesn’t know how. (1:58) (Sara Maria Vizcarrondo)