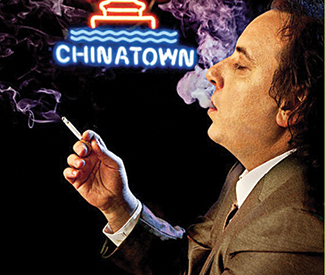 Tofu and Whiskey Furry, greased-up man child Har Mar Superstar — the singer-songwriter who’s become known as the R&B Ron Jeremy — is changing his act. Sorta. He still gets sweaty at his live shows, so naturally he will shed a few layers of clothing.

“I just don’t need to take off my pants anymore because people focus on that too much,” he tells me from a tour stop in Philadelphia. The tour kicked off with a few supporting slots with the Yeah Yeah Yeahs, stopped by his spiritual home base of Minneapolis for Har Mar Superstar Day, as declared by Mayor R.T. Rybak, and swings through San Francisco next week (Tue/15, 8:30pm, $12. Bottom of the Hill, 1233 17th St, SF. www.bottomofthehill.com).

But the real maturing of Minnesota-bred, New York-based Har Mar, aka Sean Tillmann, can be heard on new record Bye Bye 17 (Cult Records). On it, Har Mar glides gracefully from old school soul on “Lady, You Shot Me” to doo-wop on “www” to Beck-worthy retro funk on “We Don’t Sleep.” It’s all a far cry from raunchy earlier beat-based releases like cult Beth Ditto collaboration “Power Lunch.”

The hooky “www” takes place in San Francisco, and has a melancholy story beneath the shimmy-worthy riffs. Opening the song, he croons “woe is me/I missed another opportunity/another day gone/another day older.”

“I was thinking about that documentary The Bridge, about all those people from all over the place who travel to jump off the Golden Gate Bridge…It made me think about San Francisco, making a pilgrimage there to die. When I found myself thinking about it more, the sentiment of it is so…there’s something about suicide that’s so selfish that you have to slap yourself out of those thoughts.”

The album, rooted in grainy production and endless pop hooks, was recorded with Spoon’s Jim Eno, and released through Julian Casablancas’ (the Strokes) record label, Cult Records. Har Mar had been wanting to work with Eno for years, having met him more than a decade before at Eno’s show in Milwaukee on Thanksgiving. Har Mar was in town to spend the holiday at his mom’s house so he brought Thanksgiving leftovers for the band to the show, and they’ve been friends ever since.

Bye Bye 17 — the title of which is meant to convey “a rebirth into weird musical manhood” for the 34-year-old — takes Har Mar’s voice and backs it with powerful horns, Eno’s masterful drumming, and swinging guitar.

“I hadn’t written an album on guitar for Har Mar, and I wanted to try that,” says Har Mar. “And I thought it was time to write an album for my voice, more than just picking cool beats and writing songs around them, which I used to do.”

But despite the sonic shifts on Bye Bye 17, Har Mar’s funkified voice has been there all along: he’s always had the pipes to back up the sound. It was just packaged differently than one might expect, with a beer belly, which seemed to throw people. On previous records like 2002’s You Can Feel Me and 2009’s Dark Touches, that vocal gift was layered thick with ultra-sexuality which often translated into hipster irony for the lazy masses. Though it was still totally fun party music, regardless. And that sensibility remains.

It’s where the Har Mar character started, way back in the early 2000s, with a desperate urge to continue the party. Before Har Mar, Tillman was the bassist and lead singer of noise band Calvin Krime in the late ’80s, following that up with Kill Rock Stars pop act Sean Na Na. When he was on tour with Sean Na Na, he often played with fellow KRS acts like Bangs and Gossip, and he claims the best part of the night would often be the after-parties, at which Tillman and all the girls would dance and sing along to songs like TLC’s “No Scrubs.”

“It was just like, the show almost seemed like something we had to get through to have the party. And I was like, I want the show to be the party. So I merged my lives into one tidy package.”

Plus, Sean Na Na was already closing with a cover of R. Kelly’s “When a Woman’s Fed Up.” And it was “slaying.” Having personally witnessed this, I can attest to the awesomeness of the tribute.

As Sean Na Na was still touring when the Har Mar concept was hatched, Tillman at first claimed Har Mar was actually his younger brother, though he eventually gave up on the ruse. “It started out as a character, but it’s not really one anymore. Now I just am that guy.”

So Har Mar’s tight package (see what I did there?) was born with 2000’s self-titled KRS record, and Tillman began stripping down, break dancing, and erotically humping pillars at live shows. All well and good, but the press often lambasted him, assuming that as a sleazy white male singing R&B, he was a novelty act. But despite his early noise, Har Mar’s contemporary R&B and pop roots run deep.

“I was, like, 12 when I started my first band. I was really into the Pixies, Nirvana, Velvet Underground. I wanted to sound like that but it took forever to figure it out,” he says. “But I was into R&B at the same time. I was listening to the Dead Kennedys and New Edition on my paper route, you know what I mean? I was always into pop radio at the same time as all this punk and weird stuff.”

He name checks youthful favorites like Keith Sweat and all the New Jack Swing stuff, and says he rediscovered his love of contemporary R&B pop during college in Chicago in the ’90s with Aaliyah, Ginuwine, and that Brandy and Monica song (“The Boy is Mine”). All those inspirations came out in some form or another on early Har Mar records.

Now, his biggest inspiration would seem to be soul pioneer Sam Cooke, both sonically on Bye Bye 17, and in first track “Lady, You Shot Me” — the title comes from Cooke’s supposed last words.

With Bye Bye 17, Har Mar melded himself and Har Mar into one act, taking bits and pieces from early Sean Na Na soft pop days, vintage soul superstar inspiration, and his own vocal capabilities to create an album that’s both thoughtful and entertaining.

“I finally got to be in the winter in New York when I was writing it, and I think that kind of took it in the direction it went. I came back to a form and took two styles I’d done before and put them together and it became more of a soul thing, which is awesome.”

The music may be more authentic and personal but he still prefers a passionate live show to a snoozer.

“It just comes from wanting the audience to not be bored. There’s a lot of boring shit happening,” he says. “I’ll still end up shirtless and probably making out with people but that’s just because it’s fun as fuck. My job rules.”

The golden-locked golden child Ty Segall returneth, pounding and hollering behind the drums of newish group Fuzz. Fuzz, which includes frequent Segall collaborator Charles Moothart on guitar and vox and Chad Ubovich on bass, just last week released a self-titled debut full-length on In the Red. The noisy record, tripped-out and heavy, is said to be influenced by both Black Sabbath and Jimi Hendrix. Picture that in a cloud of smoke with the backbone of California’s most prolific weirdo rock’n’roller and you’ll have a good sense of what goes down on this debut.

Avant-garde British electronic noisemakers Fuck Buttons haven’t released an album since 2009’s searing Tarot Sport, but that doesn’t mean they’ve been forgotten: Two of the band’s tracks played during the 2012 London Olympics opening ceremonies (“Olympians” and the awesome “Surf Solar”). And this month’s Slow Focus (ATP Recordings), the band’s third album, proves it’s still quite hard to ignore. Slow Focus is a jumbly, forceful mix of the elements: doomy vocals, beeping synths, keys, analog drumming, moody droning, zips, zaps, and bleeps. First single “The Red Wing” sounds like an alien spaceship anxiously hovering above the forest before cautiously zooming in for a landing. And there’s a contest with that song: build, glitter, or decorate a gold cube like the artwork for “The Red Wing” and tweet/Facebook a photo to @FuckButtons with the hashtag #slowfocus for a chance to win tickets to your local show.