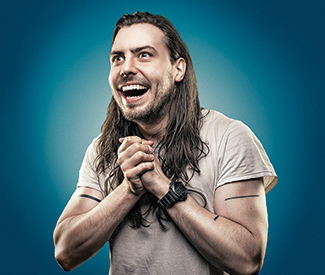 MUSIC The progression of party-rock champion Andrew W.K.’s career reads less like a linear trajectory than a whirlwind of bizarre, hilarious, and downright enviable undertakings. After he started out as a keyboardist in New York’s avant-garde circles, and built his reputation with a handful of ecstatic butt-rock records (most notably 2001’s I Get Wet, featuring that iconic nosebleed on its cover), W.K.’s biography plunged into full-on chaos mode.

From new-age piano improviser on 2009’s 55 Cadillac, to kids’ game-show host on Cartoon Network’s Destroy Build Destroy, to celebrity ambassador of Playtex Fresh + Sexy Wipes, to valiant record-setter for Longest Drum Session in a Retail Store after this year’s much-blogged 24 Hour Drum Marathon, predicting W.K.’s next move over the past decade has proved futile. Yet, his latest gig might be the most wonderfully surprising of all: assuming the bandleader role in the latest incarnation of punk-rock legends, the Ramones.

Speaking to the Bay Guardian over the phone from St. Louis, on his second US tour stop as the band’s de-facto Joey figure, W.K. sets his zany, carefree party persona aside, revealing himself as both humbled and starstruck at the reality of leading the band he’s idolized for so many years.

“It’s a combination of feeling on top of the world, because dreams just keep coming true, and terrified by the magnitude of how fantastic the opportunity is, and also, not embarrassed, but just aware, of how many other people would like to have this chance to sing these songs with Marky. Why do I get it?” W.K. ponders.

“I feel very, very lucky, like I want to represent all my friends and all the people around the world that love this music so much. I feel like I’m doing this on [their] behalf, and that this opportunity is to be shared as much as possible, at least in spirit.”

Most famously led by Joey, Dee Dee, Johnny, and Tommy, the most iconic quadfecta of first names in rock since the Beatles, the Ramones forever changed the course of pop music, as one of the formative outfits of the punk rock movement. The songs, from “Blitzkrieg Bop,” to “Rock ‘n’ Roll High School,” to “Bonzo Goes to Bitburg,” were hedonistic in their intent, and radically economical in their structure and duration, feeding directly into the party mindset W.K. would adopt decades afterward.

Their records, from the skeletal beginnings of Leave Home and Rocket to Russia in 1977, to the Phil Spector-produced technicolor pop of End of the Century in 1980, certainly marked an artistic progression, but W.K. thinks of it differently.

“All the albums are just this big explosion of inspired genius. It’s hard to even break it apart. I don’t want to break it apart, actually. I just like thinking of the whole thing as just this one phenomenon.

“[The Ramones are] so singular. They’re so completely self-actualized, that just them standing there screams this certain feeling, and no one else has it… When we play live, it almost feels as if the show is one song.”

While Marky Ramone didn’t join the band until partway through its creative explosion (he took over for Tommy on drums in ’78, after several stints with the Misfits and Richard Hell & the Voidoids), he continues to keep the Ramones legacy alive, as its last remaining member after the deaths of Joey, Johnny, and Dee Dee, from lymphoma, prostate cancer, and a heroin overdose, respectively. W.K. is clearly inspired by Marky’s resilience, through tumultuous times that would’ve rendered positive, joyful music a near impossibility for many musicians moving forward.

“One of the most inspiring parts is his conviction to keep on going and doing all that he can to do this music, which is a cheerful kind of music,” W.K. explains. “No matter how dark aspects of the whole adventure have been, or how challenging, or how sad, or how frustrating, there was always a cheerful effort. The end result was to feel good, not bad.”

W.K. might not be the most intuitive choice to assume Joey’s position as lead singer, yet he contends that his feel-good reputation, and outspoken promotion of partying as way of life, is what captured Marky’s attention, eventually resulting in the current touring lineup.

“Marky, right away when we first met, had done some amount of research into my vibe, or whatever, and said he definitely enjoyed and appreciated the party philosophy,” W.K. says. “[However], at our first dinner together, he explained that he doesn’t want someone who would even attempt to replicate [Joey’s persona]. The shoes are impossible to fill.”

“The thing is, the music is so good, that as long as you sing the best you can, it takes care of itself. No one could ever sing like Joey, even if they tried. It’s futile. There’s no singer like him. But, the songs, as Marky says, deserve to still be played. I just serve him, serve the legacy, and most of all, the music, as best I can.”

On Saturday night, Ramones fans can expect a 30+ song set, borrowing from each of the band’s albums, from its 1976 self-titled debut, to 1995’s farewell effort, ¡Adios Amigos!. Upon W.K.’s request, Marky agreed to include a rendition of “Bonzo Goes to Bitburg,” from 1986’s Animal Boy, a song he heard in a NYC record store as a teenager, in the moment that cemented his Ramones fandom.

“That’s the moment during the show when I can connect all these different times,” W.K. explains, “from the first time I ever saw the Ramones, to the first time I ever heard that song, and now I’m singing it with Marky onstage. Those are the kind of moments that make life worth living. Even if you just get a few of them in your life, you’re lucky.”

With FIGO, the Meat Sluts