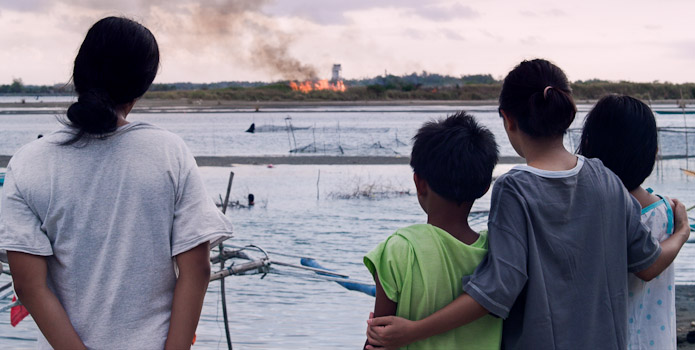 Every time I told people that Lav Diaz’s Norte, the End of History (Philippines) was my favorite film of this year’s Toronto International Film Festival, I would watch their eyes glaze over and their body start shifting as if to say, “Yes … but what else?”
Perhaps the title suggests something long, slow-moving, and attempting to end their history? Perhaps they had only heard about its four-hour running time? While all of the previous statements are probably true, what I want to stress is that this film about a group of existentialist 20-somethings encapsulates why I fell in love with cinema in the first place.

There are no movie stars in the cast, and no way to quickly sum up the plot. Due to the film’s running time, the viewer physically experiences what the film’s conflicted main character Fabian is struggling with. While many TIFF audiences seemed to complain and make snarky one-liners after pretty much all of the star-studded premieres that I attended, that wasn’t the case here; Norte mesmerizes with its inventiveness and harrowing character arcs.

And yet it seems people are refusing to make the time to experience it. Neil Young of the Hollywood Reporter wrote “Diaz is apparently incapable of conveying the passage of time, instead [he] must simply inflict it.”

Personally, I learned volumes from this film, about the state of present-day rural Philippines; about Dostoevsky, Diaz’s favorite writer; about the 1890s Philippine Revolution against the Spanish. I tend to become emotionally wrecked when I watch a Diaz film; in Norte, Sid Lucero’s portrayal of a law school drop-out brought up some very deep, dark personal feelings.

But most importantly, Lav Diaz creates cinema that gets me up early in the morning. So please, Mr. Diaz: keep “inflicting” me.