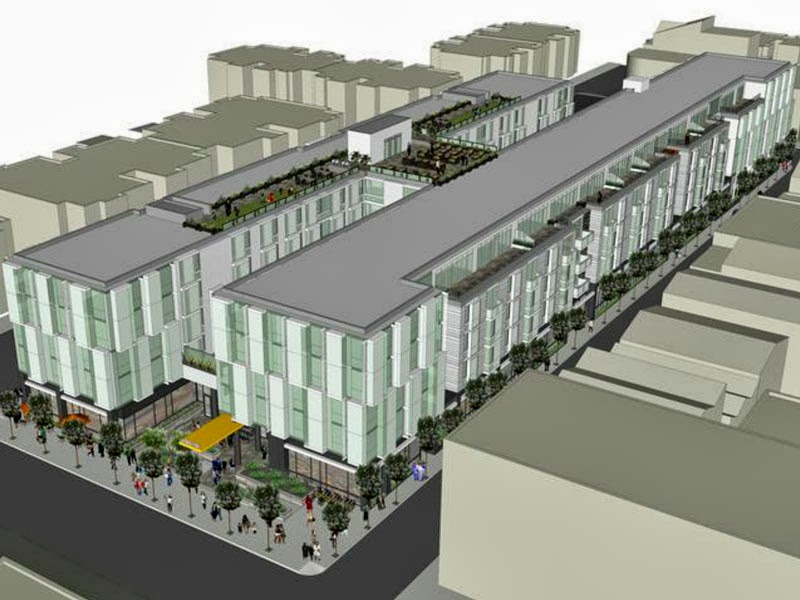 UPDATED San Francisco’s resistance to formula retail stores will be put to the test tomorrow (Thu/3), when the San Francisco Planning Commission will vote on the 555 Fulton St. project.

The project — a five-story, 136-unit residential building with a ground-floor supermarket, complete with up to 275 total parking spaces— has been bobbing in purgatory since 2010, when developers were stalled by the withering economy.

But dried-up finances aren’t what’s now holding up the development of this project in an area governed by the Market and Octavia Better Neighborhood Plan and the Formula Retail Use Ordinance, both of which discourage national chains in favor of locally owned businesses.

Debate is centering on the question of whether the formula retail ban prevents an affordable grocery store from going in at the site, as the developer contends. The politics surrounding the project have gotten heated, with Hayes Valley Neighborhood Association supporting the ban on chain stores; the Mayor’s Office, Chinatown power broker Rose Pak, and Planning Director John Rahaim supporting the developer and project contractor Walter Wong; and Dist. 5 Sup. London Breed caught in the middle.

Last week, her legislative aide Vallie Brown told HVNA that Breed would support their request for a continuance at tomorrow’s meeting while they explore ways to attract an affordable local grocer, but Breed seems torn between what she told the New Yorker recently were desires to make affordable groceries available and prevent the boutiqueing of Hayes Valley, and her support for the formula retail ban.

“Breed said that despite the ban, she’s willing to allow a chain grocery store into the area to make it more affordable for residents,” reporter Lauren Smiley wrote in the article. The Guardian has been unable to reach Breed or Brown this week.

[UPDATE: Breed told the Guardian that her biggest concern is that the grocery store is affordable to the three low-income housing projects located right across the street, and she has yet to be convinced that can happen without breaking the formula retail ban at the site, despite working on the issue with both activists and the developer.

“It’s a challenge, I get that,” Breed told us. “I want the developer to operate with me in good faith and make a serious long-term commitment to me that this will be an affordable grocery store.”

But she doesn’t yet have that full commitment, and she says that she’s planning to honor her commitment to activists and ask that the formula retail waiver be delayed today even if the rest of the project goes through. “Ultimately, I asked them to be a good community partner,” she told us.]

For Hayes Valley, this has been a near decade-long process. In 2004, the Board of Supervisors first outlawed these generic retailers from opening up shop within the Hayes-Gough Neighborhood Commercial Transit (NCT) District when it passed Ordinance No. 62-04, classifying “formula retailers” and limiting their impact within unique neighborhoods. The ordinance keeps local businesses viable, keeping deep-pocketed corporations out.

The 555 Fulton project falls somewhere between the Hayes-Gough NCT and the Residential Transit Oriented District (RTO), and currently, a two-story, 19,620-square-foot office and industrial building with about 70 surface parking spots inhabits the address.

Both the neighborhood residents and the developers have historically felt that the property would make for an excellent grocery store. “What” has never been an issue with the property. “Who” on the other hand, has been the biggest issue.

In order for 555 Fulton to be developed by a “formula retail” outlet — which have been the only types of occupants the current developers believe to be able to pay the exorbitant established rent costs  — the property technically located in the Hayes-Gough NTC needs to be designated as a “Special Use District” (SUD).

An SUD adjusts the land use controls and height restrictions for a specific piece of property, in this case allowing for a “grocery store larger than 15,000 square feet of gross occupied floor area, as well as residential uses meeting a minimum density of one dwelling unit per 600 feet of lot area.” And up until April, the property was an SUD.

Back in 2008, 555 Fulton was granted its SUD by Section 249.35A of the Planning Code Section, which established the “Fulton Street Grocery Store Special Use District.” In 2010, the Planning Commission approved both a Conditional Use Authorization and a Planned Unit Development, allowing the developer of the subject property to build their mixed-use grocery store-residential building. Neither of these exceptions allowed for a “formula retail” outlet at the time, but interest still seemed solid.

But it isn’t exactly the same request this time: Now the developers are trying to get an SUD without a provision on “formula retail” outlets, and both sides are expected to turn out big numbers on each side of the question at tomorrow’s hearing, which starts at noon in City Hall Room 400.