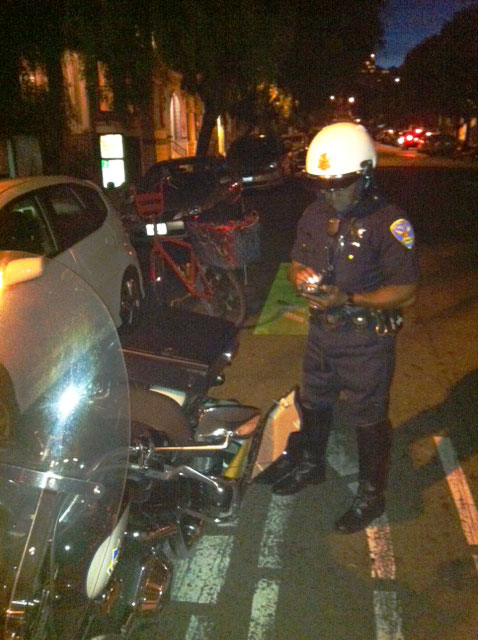 As it prepares for this Thursday’s Board of Supervisors hearing examining allegations that its officers are biased against bicyclists, the San Francisco Police Department has quietly started enforcement stings focused on cyclists riding the Wiggle, one of the city’s most popular and heavily traveled bike routes.

I was among a series of cyclists stopped by one of two motorcycle cops on Saturday night as they stood on Waller Street waiting for cyclists to make that left turn off of Steiner, the first in a series of five turns known as the Wiggle, a key bike route connecting the east and west sides of town.

The sting operation — a term that Officer R. Scott, who stopped me, denied, although that’s clearly what it was — was like shooting fish in a barrel for these guys, given that thousands of cyclists a day roll through the stop signs on the Wiggle on their way to work, school, or errands.

Since being pulled over, I’ve heard this was part of several recent enforcement actions targeting cyclists on the Wiggle, supposedly driven by neighborhood complaints. Although Scott took down my driver’s license information, entered my information into the system, and issued me a citation — lecturing me along the way, and getting an earful from me in response — he waited to the end to tell me it was only a warning (actually, it was his partner who said that he should give me a ticket rather than a warning because of how I was expressing myself, but Scott said it was too late).

I’ve asked the SFPD a series of questions about the reasons for and goals of this stepped-up enforcement against cyclists, as well as about the timing, stats, and other information. I’ll update this post if and when I get a response.

For conservative law-and-order types, it probably doesn’t seem like there’s much to discuss here. Cyclists run stop signs, that’s against the law, end of story. But if San Francisco is going to continue to encourage people to ride bikes — with all the societal benefits that brings — it needs to take a more realistic and progressive approach to this issue.

The California Vehicle Code Section 22450(a), which I was accused of violating, doesn’t distinguish between cars and bikes when it states, “The driver of any vehicle approaching a stop sign at the entrance to, or within, an intersection shall stop at a limit line, if marked, otherwise before entering the crosswalk on the near side of the intersection.”

Unlike the traffic laws in Idaho, which do have different standards for bikes and cars and where my approach of yielding but not stopping would have been legal, California has traffic laws that are hopelessly mired in another age, before global warming, air pollution, traffic gridlock, skyrocketing automobile fatalities, and other factors caused society to rediscover and embrace bikes as a beneficial mode of everyday transportation.

And when state or federal laws have lagged behind public opinion and behaviors, San Francisco has often been at the forefront of radical reform, as we have done on immigration, marijuana, civil liberties, rent control, marriage equality, and other issues where we have refused to go along with an unjust or unrealistic status quo.

How we get around, and the right to be treated with dignity and respect for the reasonable choices that we make, belongs on that list. The number of cyclists on the streets of San Francisco has surged in recent years, and it’s the official policy of the city to favor that mode over the automobile and to work toward the goal of having 20 percent of all trips be by bicycle by the year 2020.

That probably won’t happen without many more bike lanes — and it definitely won’t happen if bicyclists are expected to stop at every stop sign. Momentum matters on bikes and they become a far less appealing mode of transportation if we’re forced to come to a complete stop at every intersection, an unrealistic approach that impedes the smooth flow of not just cyclists, but motorists, Muni, and pedestrians as well.

Sup. Jane Kim called the hearing on how the SFPD handles cyclists — which is scheduled for this Thurday at 10am before the board’s Neighborhood Services and Safety Committee — after the Guardian helped expose some truly appalling anti-cyclist bias by the SFPD.

San Francisco Bicycle Coalition Executive Director Leah Shahum said that cyclists will call for better training and investigations of traffic collisions involving bikes, as well as a shift in how the SFPD polices the streets. She said her message will be, “Focus limited traffic enforcement resources on known dangerous intersections and known dangerous behaviors.”

And she said the bicyclists on the Wiggle just don’t meet those criteria. “When you look at the data on the Wiggle, it’s not a high collision area,” Shahum said, confirming reports that the SFPD has done bicycle stings on the Wiggle on at least two days in the last week.

Shahum acknowledges that there are sometimes conflicts and that bicyclists aren’t angels, noting that the SFBC has recently done events on the Wiggle encouraging bicyclists to ride carefully and yield to pedestrians and motorists when they have the right-of-way.

But she that Police Chief Greg Suhr has repeatedly called for each police district to “focus on five,” using traffic data to target the five most dangerous intersections in each district. As she said, “We’re asking the police to live up to have they’ve said, over and over.”

As for changing state law to adopt Idaho’s bike standards, Shahum said that the difficult, multi-year effort just to get a weak bike buffer law recently signed into law shows that’s probably not realistic. But here in San Francisco, there’s much more we can do to encourage safer cycling and road sharing.