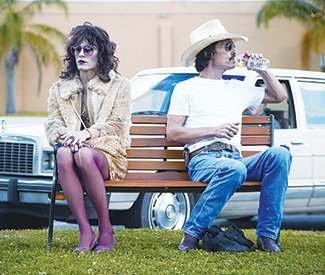 If you’re gonna make the journey across the Golden Gate Bridge, the movie better be worth it, right? Fortunately, the 2013 Mill Valley Film Festival boasts a stellar schedule. Read on for our top picks.

Run & Jump (Steph Green, Ireland/Germany) San Francisco-born director Steph Green’s first feature is a likable seriocomedy about an Irish family trying to adjust to some drastic, unforeseen changes. After suffering a stroke and coming out of a coma, Conor Casey (Edward MacLiam) is a changed man — uncommunicative, sometimes volatile, seldom at all like the beloved husband and father he was. As wife Venetia (Maxine Peake) and their two kids tiptoe around him, they get a houseguest in the form of American neurologist Ted (Will Forte), who’s here to study Conor’s recovery (or lack thereof) with clinical detachment. The reserved, emotionally withdrawn Yank finds himself drawn into the Caseys’ shared warmth, particularly in its current need for a fill-in adult male — opening up to the children and, more riskily, striking romantic sparks with the Mrs. A bit formulaic but a crowd-pleaser nonetheless, the film is perhaps most notable for its winning dramatic turn by Saturday Night Live alum Forte, also at MVFF in Alexander Payne’s Nebraska. Fri/4, 9:15pm, and Sun/6, 1pm, Sequoia. (Dennis Harvey)

Imagine (Andrzej Jakimowski, Poland) Andrzej Jakimowski’s quiet yet sometimes exhilaratingly original film manages to make blindness relatable as perhaps never before in a primarily visual medium. Ian (Edward Hogg) is an enigmatic Englishman who shakes up a Lisbon facility for his fellow sightless with radical ideas and an insistence that residents push their limits — throwing away their canes, moving about more boldly in the world via developing almost superhuman attentiveness to sound reverberation as their guide. There are a couple astounding (and hair-raising) sequences where the viewer’s own sensory intake is focused in unfamiliar ways. Mysterious, peculiar, and wistful, Imagine is uneven but often arrestingly memorable, its biggest minus being a musical score that mistakenly thinks this is an antic comedy. Sat/5, 6:15pm, and Sun/6, 6:30pm, Smith Rafael. (Harvey)

Desert Runners (Jennifer Steinman, US) It’s appropriate that Mill Valley, starting point of the legendary Dipsea Race, hosts the US premiere of this doc about a group of runners who attempt to complete the 4 Deserts Race Series, which stages ultramarathons across unforgiving terrain in Chile, China, Egypt, and Antarctica. Each athlete has his or her own stirring backstory, and each shows incredible grit in the face of injuries and intense dehydration. Darker moments come courtesy of petite Aussie Samantha’s mid-race encounter with a would-be rapist, and the news that a competitor (not featured in the film) has died along the trail. But Desert Runners is ultimately an admiring portrait of its charismatic subjects (all white, all presumably able to afford the $20,000-plus total cost of entering all four races) who willingly subject themselves to extreme bodily harm. It’s up to the viewer to decide if they’re inspirational, or kinda nuts. Or both. Sun/6, 2:15pm, Sequoia; Oct 12, 5:45pm, 142 Throckmorton. (Cheryl Eddy)

Le Week-End (Roger Michell, UK) Director Roger Michell and writer Hanif Kureishi first collaborated two decades ago on The Buddha of Suburbia, when the latter was still in the business of being Britain’s brashest multiculti hipster voice. But in the last 10 years they’ve made a habit of slowing down to sketching portraits of older lives — and providing great roles for the nation’s bottomless well of remarkable veteran actors. Here Lindsay Duncan and Jim Broadbent play a pair of English academics trying to re-create their long-ago honeymoon’s magic on an anniversary weekend in Paris. They love each other, but their relationship is thorny and complicated in ways that time has done nothing to smooth over. This beautifully observed duet goes way beyond the usual adorable-old-coot terrain of such stories on screen; it has charm and humor, but these are unpredictable, fully rounded characters, not comforting caricatures. Briefly turning this into a seriocomedy three-way is Most Valuable Berserker Jeff Goldblum as an old friend encountered by chance. It’s not his story, but damned if he doesn’t just about steal the movie anyway. Mon/7, 6:30pm, and Oct 11, 5:15pm, Sequoia. (Harvey)

Like Father, Like Son (Hirokazu Kore-eda, Japan) A yuppie Tokyo couple are raising their only child in workaholic dad’s image, applying the pressure to excel at an early age. Imagine their distress when the hospital phones with some unpleasant news: It has only just been learned that a nurse mixed up their baby with another baby, with the result that both families have been raising the “wrong” children these six years. Polite, forced interaction with the other clan — a larger nuclear unit as warm, disorganized, and financially hapless as the first is formal, regimented, and upwardly mobile — reveals that both sides have something to learn about parenting. This latest from Japanese master Hirokazu Kore-eda (1998’s After Life, 2004’s Nobody Knows, 2008’s Still Walking) is, as usual, low-key, beautifully observed, and in the end deeply moving. Oct 9, 2:30pm, Smith Rafael; Oct 12, 8pm, Lark. (Harvey)

Dallas Buyers Club (Jean-Marc Vallée, US) Jared Leto appears in person for this screening of Jean-Marc Vallée’s well-crafted, based-on-true events drama about the early days of the AIDS epidemic, specifically focusing on the struggles patients faced in getting safe, effective medication. Leto, who has lately been focusing on his music career, has a standout supporting turn as Rayon, a transgender woman who loves Marc Bolan, gowns, and sparring with business partner Ron Woodroof (Matthew McConaughey). Look for Leto and McConaughey — the best he’s ever been, as a good ol’ boy and confirmed homophobe who becomes an activist and agitator after contracting HIV — to earn plenty of notice come awards season. Oct 10, 6:30pm, Smith Rafael. (Eddy)

At Middleton (Adam Rodgers, US) Star and co-producer Andy Garcia will be on hand for the local premiere of this romantic comedy co-starring Vera Farmiga. They play strangers paying introductory visits to the titular (fictive) college with offspring on the brink of leaving home and starting independent adult lives. Everyone is temperamentally ill-matched — jokester mom with humorless daughter, persnickety dad with laid-back son — but during the course of the day strolling around campus, frissons of romance and new self knowledge occur on both sides of the generation gap. Adam Rodgers’ feature is pleasant but a little too pat, relying overmuch on the appeal of lead actors who’ve been better served elsewhere. Oct 12, 5pm, and Oct 13, 11:15am, Sequoia. (Harvey)

All is Lost (J.C. Chandor, US) As other reviewers have pointed out, All is Lost‘s nearly dialogue-free script (OK, there is one really, really well-placed “Fuuuuuck!”) is about as far from J.C. Chandor’s Oscar-nominated script for 2011’s Margin Call as possible. Props to the filmmaker, then, for crafting as much pulse-pounding magic out of austerity as he did with that multi-character gabfest. Here, Robert Redford plays “Our Man,” a solo sailor whose race to survive begins along with the film, as his boat collides with a hunk of Indian Ocean detritus. Before long, he’s completely adrift, yet determined to outwit the forces of nature that seem intent on bringing him down. The 77-year-old Redford turns in a surprisingly physical performance that’s sure to be remembered as a late-career highlight. Oct 12, 3:30pm, Smith Rafael; Oct 13, 8:15pm, Sequoia. (Eddy)

The Missing Picture (Rithy Panh, Cambodia/France) Rithy Panh’s latest film about the homeland he fled as a teenager is atypically, directly autobiographical, and most unusually crafted. He re-creates his once comfortable Phnom Penh family’s grim fate after Pol Pot and company seized control of Cambodia in 1975 — as all fell prey to the starvation, forced labor, and other privations suffered by perceived “enemies” of the new regime — not by any conventional means but via elaborate dioramas of handmade clay figures depicted in prison camp life (and death). There’s also ample surviving propagandic footage of the Khmer Rouge trumpeting its “model society” that was in reality little more than an experiment in mass execution and torture. The result is a unique and powerful take on one of the 20th century’s worst crimes against humanity. Oct 12, 4:45pm, Lark; Oct 13, 5:30pm, Smith Rafael. (Harvey) *