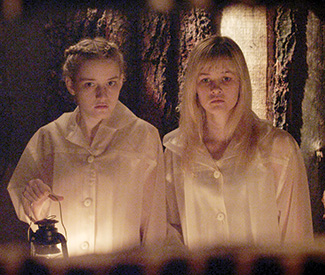 FILM The title of Jim Mickle’s latest film sums up the attitude of the Parker family: We Are What We Are. We eat people. Our human-flesh cravings go back generations. Our dietary habits have become our religion. And that’s just the way it is — until teen sisters Iris (Ambyr Childers) and Rose (Julia Garner) start to have some doubts.

As We Are (a remake of Mexican director Jorge Michel Grau’s 2010 film) begins, the girls’ mother has suddenly died amid a punishing rainstorm — and their grief-stricken Dad (Bill Sage) has become awfully twitchy. As the local police, a suspicious doctor (Michael Parks), and a curious neighbor (Kelly McGillis) begin to poke into their business, the Parkers prep for “Lambs Day,” a feast that most definitely involves whoever is chained up in the basement.

Next up for Mickle and his co-writer Nick Damici — they’re best-known for 2010’s Stake Land, which starred Damici — is Cold in July, an actual non-horror film (though it is based on a novel by Bubba Ho-Tep author Joe R. Lansdale). But first: who’s hungry?

SF Bay Guardian How did the success of Stake Land affect your career?

Jim Mickle We Are What We Are is really more non-horror than it is horror, and I think Stake Land gave us the confidence to do that — to explore within the genre and try new things.

SFBG Can you expand on why you think We Are is more “non-horror”?

JM To me, it’s more of a dark story about faith and religion, even though the word “cannibal” is a horror idea, and there are obviously scenes that hit that. Stake Land is a vampire-apocalypse story with action scenes, but the heart of it was the orphaned [lead character] coming of age in a destroyed world. The horror elements are just kind of the sprinkles on the ice cream.

It was the same thing here. I was much more interested in the girls’ story, and the story of a family trying to hold together after a tragic event.

SFBG This film is a remake, but it seems you were pretty intent on putting your own stamp on the story.

JM Yeah, definitely. I’m one of the biggest haters of remakes. It’s funny, because I’ll see people online going, “Why did they redo this?” And usually, that’s me complaining. I’m a fan of so many of the horror movies that then get butchered by Hollywood. So when I was first [asked to do] an American version of this, I kind of rolled my eyes a little bit. And when [Damici] and I first watched the movie, we were like, “Why redo this? It’s a good movie!”

But then, over a couple of days, we started to sort of brainstorm ideas. The first thing was taking it out of a Mexican city and putting it into rural upstate New York. Instantly it’s very different, but it’s also something that I know very well and can talk about personally and uniquely.

Still, we wanted to hang onto [certain things] about the original. I loved what [Grau] did with the tone, and its restraint and simplicity.

SFBG Kelly McGillis was so memorable in Stake Land, and it’s great to see her back for We Are. What’s your relationship with her like?

JM I think she had a great time on Stake Land — she hadn’t done a movie in years before that. I like shoots that are fun, and I try to remember that getting to make movies is a privilege and that we should enjoy it as we go, and I think she has the same sense. We clicked instantly.

[Damici] wrote this character specifically for her. She’s very goofy in real life, and we wanted to play that up. It’s the perfect role for her, the wise-but-also-nosy neighbor. We called her about it, and before we had even said anything she said “I’ll do it! I can’t wait!” *

WE ARE WHAT WE ARE opens Fri/4 in San Francisco.