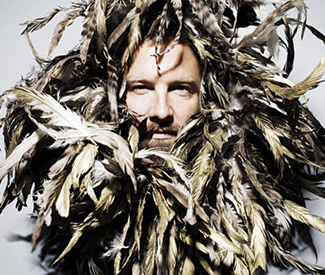 SUPER EGO Where are the monkeys? Where are all the freakin’ monkeys?

If you’re a fan of Claude Vonstroke and his prolific dirtybird label — and there are millions of us now — that question might come howling to the fore after your first listen to nifty new album Urban Animal, his third. Vonstroke’s subversively relatable sound is so distinct that as soon as one of the tones of his sui generis sonic palette drops out — hooting monkeys, timpani rolls, zippy whistles, jungle beats, brass interjections, goofy bird puns, calliope synths, sly drops — you begin to wonder if bass music’s über-huggable jester has gotten all introspective on us.

No fear of that, although he has adopted a new way of working: “I didn’t even notice the chimps were missing,” Claude told me with a laugh on the phone from LA, where he’s currently staying (although he still considers SF his home). “But I did make this album in different way in general. Before, I would obsess about one track at a time until it was finished. But now I put down ideas as they come to me and mix them all together — a bass line from here, a drum track from there — from about 20 open folders. It worked out so much better that way.”

Thanks goddess for Vonstroke: he’s our biggest DJ export after Kaskade and Bassnectar — huge enough to play more mainstream gigs like Electric Daisy and HARD, yet his sound is so singular (and brilliant) that massive fest promoters don’t quite know what to do with him. “They usually give us our own space,” Vonstroke chuckles. “So much better than being sandwiched between a post-dubstep duo and a pop-EDM act and wondering what the hell to play.”

But more than that, he and his dirtybird crew bring an almost perfect version of the one thing dance music often gets horribly wrong: wit. They have an endlessly inventive way of mixing booty music’s delicious vulgarity with gorgeous production and a smart dose of melancholy to create a thoughtful, monumental running joke on the dance floor.

The sense of humor remains intact on Urban Animal. Despite lovely cover art collaging the industrial buildings of his Detroit youth into beautiful beasts, and pretty, spaced-out tracks like “The Bridge” and “Can’t Wait,” Vonstroke still buffs your funny bone.

Consider the pumping, woozy, operatic chipmunk-climaxing “Dood”: “I wanted to make a stoned California surfer track, but then the aliens got in there, and it went this kind of ‘beam me up’ way. Like that one friend on the couch at parties always saying ‘Dude, you won’t believe this thing that happened…’ and it’s actually a crazy thing that happened,” Claude told me.

Even the lilting, expansive “Can’t Wait” has its origins in a funny, familiar club moment. “I was outside a party in Ibiza” — where dirtybird just wrapped up a longtime party residency — “and this absolutely breathtaking track started to play as the sun came up. I still don’t know, don’t really want to know, the name of the track. But I resolved I would create something like it if I could. Kind of as a way of passing on that feeling.” (If it weren’t such a part of his DJ repertoire, I’d say that track was Andre Lodemann’s “Where Are You Now?”)

After wrapping up in Ibiza — an endeavor which, added to his monthly parties here at Mezzanine, a hectic appearance schedule, label duties, and mucho recording, sounds exhausting — Claude’s taking a break with his new family down south before hitting town to kick off the Urban Animal tour Fri/4 at the Regency Ballroom (9pm-late, $25–$30. 1290 Sutter, SF. www.theregencyballroom.com), and to spin at SF’s first installment of the great Boiler Room streaming live DJ series.

Expect no bells and whistles beyond those found in the stunning music, however. “Don’t worry, I’m not going to parachute in during a storm of lasers and fire canons,” Claude assures me. “We’re not the kind of ‘big DJs’ who have all these ’90s cartoons or my own name scrolling across humungous screens. I never really understood why you would want to make your party like watching a giant television. It should be about dancing.”