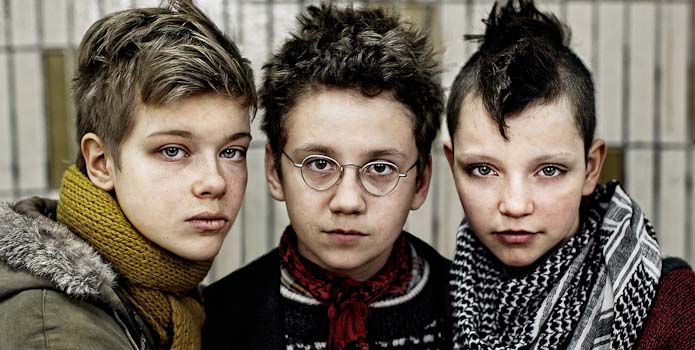 Swedish auteur Lukas Moodysson is back and he may have just created one of the most riotous punk rock extravaganzas ever. We Are the Best! (Sweden/Denmark) played to packed houses throughout the entire Toronto International Film Festival, creating an astounding word of mouth buzz.

While the film takes place in the early 1980s,  I never felt like the movie was attempting to represent the entire era. In fact, Moodysson’s film (which is based on wife Coco Moodysson’s graphic novel) allows the all-grrrl band to blossom into real-life punk rockers. Evoking passionate punk portrayals like Times Square (1980) and Ladies & Gentleman, The Fabulous Stains (1981), which he was unaware of until I interviewed him, this coming of age drama seems to capture Stockholm circa 1982 in perfect detail.

The soundtrack was a major part of discussion during the Q&A, becoming the perfect entry point for those of us desiring an history lesson on the Swedish punk scene. But what I found most exciting about We Are the Best! is its approach to gender roles, as its young female characters attempt to cast aside pressures to look pretty. Either way, Moodysson has created a film just as enjoyable as his debut feature, 1998’s Show Me Love. It has the potential to become a worldwide hit in the same vein as Trainspotting (1996) and Run Lola Run (1999).

Elsewhere, Maneesh Sharma’s latest romantic comedy A Random Desi Romance (India) is cause for quite a celebration! This Hindi musical, which runs two and a half hours, feels like a major shift in the mainstream Bollywood system.

Not only are there no classic “hunk” characters, but stars Parineeti Chopra and Vaani Kapoor have quite progressive attitudes toward love and life that typically I have only seen in Indian films made outside the country. The leading male is no slouch either, played purposefully awkwardly by Sushant Singh Rajput. The characters are wrapped up in a surprisingly consistent story that critic Danny Bowes called “the best romantic comedy made anywhere in the world for 2013.”