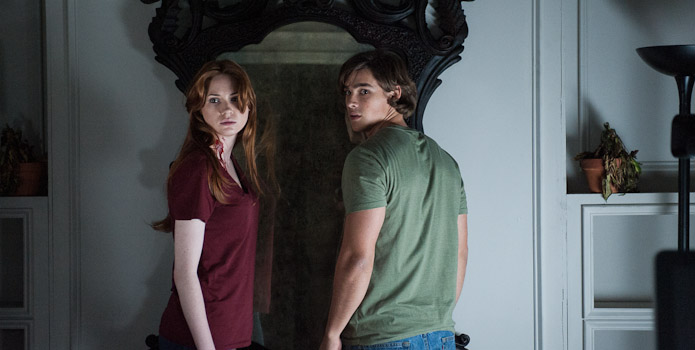 Jesse Hawthorne Ficks returns, and this time he’s got the genre goods! Check back for more of his 2013 Toronto International Film Festival coverage, coming soon!

Eli Roth’s latest direct-to-streaming effort The Green Inferno (US) pays homage to Ruggero Deodato’s Cannibal Holocaust (1980) with some of the most deliciously disgusting violence seen onscreen in quite some time. Like Nicolás López’s Aftershock (2012), which Roth wrote, produced, and starred in, Inferno has a wonderful B-movie quality that will probably prevent it from achieving mainstream success. (Splatter fiends, however, are in for a treat.)

But it was Kim Ki-duk’s jaw-dropping, toe-squinching, stomach-churning Moebius (South Korea) that had me gasping for air throughout its entire 89 minutes. The film combines everything that you have learned to love about Kim Ki-duk’s style — ranging from his initial splash The Isle (2000) to Spring, Summer, Fall, Winter… and Spring (2003) and 3 Iron (2004) — and then doubles it. Whatever you do, DO NOT READ ANY SPOILING REVIEWS of this film. Know that if you are into transgressive art-horror films, this is the kind of movie to stay up late for.

However, the similarly bold Under the Skin (UK), from director Jonathan Glazer, baffled TIFF-goers so much that I heard close to half a dozen audience members complaining at how obtuse and confusing it was. One such remark (“The most expensive student film ever made!”) made me ponder the ever-widening gap between abstract visual filmmaking and mainstream “art” cinema.

Glazer’s previous works, the scrumptious Sexy Beast (2000) and the underrated Birth (2004), both seemed to satisfy even the most finicky film snob. So what is it about Under the Skin that is so intangible? (The fact that it’s been compared to Shane Carruth’s most recent visual poem Upstream Color could help designate which side of the argument you stand on.)

Even haters can’t argue with the stellar performance by star Scarlett Johansson. That said, while Johansson shared how difficult it was for her to overcome her anxiety about the film’s nude scenes, I was most intrigued by Glazer’s nervous behavior in the moments before the screening. He even felt it necessary to “help us,” and explained that the film aims to probe our world from a distant perspective.

I wonder if Yoko Ono’s 25-minute short Fly (1970) — which involves a naked woman and a very curious fly — seems even more relevant now, for it too attempted to expand the consciousness of its viewers. I will be very curious to see how Under the Skin fares commercially. If it connects with the right audience, it has the power to truly affect moviegoers, especially those looking for alternative types of moving images.