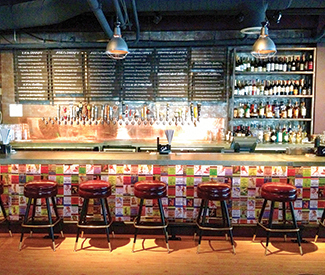 BEER + WINE San Francisco is awash in a sea of suds right now, and based on the number of wine bars that keep opening, it’s like there’s a citywide edict that every neighborhood has to have at least one good wine bar — not like that’s a bad thing. It’s a lot to keep track of, though, which gets extra-challenging when alcohol is involved (hic), so consider this your handy cheat sheet on all the latest places to hit.

Let’s start with the biggie, shall we? Locals are going nuts for this first US location of the famous Copenhagen beer bar (a partnership between Chuck Stilphen of The Trappist and Trappist Provisions and Mikkel Borg Bjergsø of Mikkeller). The draw? Forty taps of very choice beers that will keep you coming back, plus two cask handles, poured by a staff that is entirely composed of certified cicerones, so you can get an education with every sip. Downstairs, the Tivoli Sour Room just opened, where you’ll find 80 bottles of lambics and sour beers. You can order up some beer-friendly food, like housemade sausages, soft pretzel rolls, sandwiches, and more. Expect a crush of humanity: yeah, this place is hot-hot-hot. 34 Mason, SF. www.mikkellerbar.com

The next time you find yourself in Union Square and in need of something frothy to drink, this casual place has more than 100 beers — with 50 on draft! It’s also a game room, for those of you who dig things like shuffleboard. It has an adult clubhouse-meets-tavern vibe, sporting fun, eclectic décor (it’s on the second floor of the historic Press Club building). 449 Powell, SF. www.ggtaproom.com

Right by that crazy wind tunnel on Market Street is this newly opened spot that’s hard to notice unless you know it’s there. (So now you know.) There are 20 taps of craft California beers, plus a retail selection with bottles you can cart home. Oh yeah, and if you’re with someone who prefers wine, well, they’ll find something to drink, too. It has a modern tavern look, and since it’s right by the Twitter offices, expect a post-work scene. 1 Polk, SF. www.thebeerhallsf.com

Freshly opened — like, just this week! — is this new gastropub in the Design District. Twenty beers on tap include selections from afar, like Sculpin in San Diego or Ommegang in Cooperstown, NY, and local brews like Drake’s Brewing Company and Social Kitchen and Brewery (chef Chris Wong was previously at SKB). There’s a menu of cute pub fare; open for lunch and dinner. 680 Eighth St, #170, SF. www.blueprint-sf.com

One of the most exciting wine-related openings is inoVino in Cole Valley, because the owner, Claudio Villani, knows his shit. He was formerly the wine director at Perbacco, and here he has decided to focus on Alpine and volcanic wines of Italy. He wants the wines to be approachable, as in not breaking the bank, so that’s always appreciated. Since it’s an enoteca, there are also things to eat, like different presentations of mozzarella, bruschette, panini, and more. It has a chic look, with a Carrara marble bar, and sleek metal wine racks, and will be a great date spot, mark my words. 108 Carl, SF.

Over on Russian Hill, Lucrecia Torres and Annie Flores have opened a wine bar that was designed to feel like a bar, complete with some swanky and artsy touches. The wine and beer list includes 10 wines by the glass (like chardonnay from Matthiasson) to French picks, while beers include Old Speckled Hen from England, and locals like Lagunitas IPA. The menu of bites has a hummus tostada and a “make your own bar picnic.” 2032 Polk, SF. www.robberbaronsf.com

Now, Tosca may be known primarily as a bar, but when the iconic space reopens in October with new owners Ken Friedman and April Bloomfield (she’ll also be on chef duty), there’s going to be quite the wine program to go along with the new menu. The mastermind behind the wine list will be Ceri Smith of Biondivino fame, working with iconoclast Randall Grahm of Bonny Doon Winery) Look for some very classic Italian wines — Chianti, Barolo, Brunello, and the like. Cin cin! 242 Columbus, SF. www.toscacafesf.com

This new little Mission wine bar is a casual spot where you can hang out for a glass of wine at the bar (there are 12 local wines on tap) and a bite (like a flatbread or lamb sliders), or take a seat at a table for a full meal, or even an “adult lunch” during the day (which would entail a Pal’s Takeaway sandwich and glass of vino or a beer — it’s five o’clock somewhere!). Speaking of beer, there are three on tap, or you can go for a 22 oz. bomber of CaliCraft Cali Cöast Kölsch. 3066 24th St., SF. www.lamovidasf.com

Dave McLean’s Dogpatch brewery is oh-so close—he hopes to be brewing by the end of September. The 30-barrel system is tripling his current seven-barrel operation at Magnolia in the Haight. Opening soon after will also be a restaurant highlighting regional barbecue, with chef Dennis Lee (of Namu Gaji), plus lots of whiskey, too. Trouble! 2505 3rd St., SF. www.magnoliapub.com

Another Dogpatch addition will be this brewery and tap room, with 15 brews for beer lovers to explore — including barrel-aged and seasonal releases — plus selections from other local breweries, too. Look for an opening before the end of the year. 2245 Third St., SF. www.triplevoodoobrewing.com

Due to open in October in SoMa, this new brewery comes courtesy of partners Connor Casey (of Marin Brewing and City Beer Store) and brewer Tim Sciascia (previously Marin Brewing). Their plan is to offer a constantly changing selection of beers on 12 taps: expect big flavors, with stouts aged in bourbon barrels, hoppy IPAs, and saisons. The first four beers will be a porter, an IPA, a pale ale, and a sour ale with seasonal fruit. The industrial space will feature exposed brick, high ceilings, and a roll-up garage door, with lots of custom woodwork. 1150 Howard, SF. www.cellarbrewing.com

This upcoming Nob Hill establishment is going to be plying neighbors with 32 taps of all-California beers come this November (pending inspections), plus some Cali wines as well. The project is from Sky Wegman, Chris Barry — both of Dogpatch Saloon and 83 Proof — and Jon Guinea of Wood Tavern in Oakland, with Bruce Paton consulting on a menu of inventive comfort food. Hopwater plans to host special beer events, and there’s even going to be a patio (bonus). 850 Bush, SF. www.hopwaterdistribution.com

Nearby USF students can almost taste the handcrafted beers that will be made on-site in this spacious, multilevel location by Ivan Hopkinson. (How’s that for a brewer last name?) Chef Tim Tattan’s inspiration for the menu will come from Bavarian pub food and California cuisine. Stand by for an opening this winter. 1785 Fulton, SF. www.barrelheadsf.com

The former Pasha space on Broadway is turning into a 170-seat restaurant (yeah, it’s a big ‘un), with 28 beers on tap (local craft beers in the house!), plus two ciders and quite the selection of bottled beers as well, curated by bar manager Jesse Ostroski. Owner Giovanni Toracca has brought on a rocking chef (Michael Lamina) who will be turning out a gastropubby menu, featuring elevated bar food (think five kinds of pâté), plus there’s a wood grill and rotisserie. There will also be cocktails, and eight wines on tap. Thou shalt not go thirsty, nor hungry. 1516 Broadway, SF. *