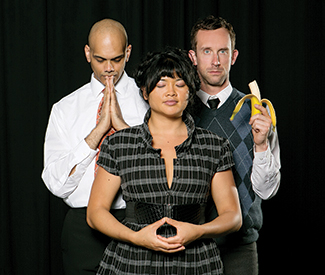 DANCE Because the Bay Area has a reputation for encouraging artistic exploration, audiences have come to expect the unexpected — including having a monkey wrench thrown at them. Case in point: Erin Mei-Ling Stuart and her cohorts, who for their newest dance theater work, Monkey Gone to Heaven, pulled together some rather odd strings. Still, in the end they managed to say something intriguing about humankind’s connections to our closest relatives below, and our aspirations to whatever is above. The piece, however, is so multifaceted that I found myself overwhelmed with the sheer quantity of references. Were there episodes involving such outcasts as the biblical Ham, Africa’s pre-human Lucy, and Nijinsky in his madness?

Yet Monkey also stands as an evenhanded, lighthearted revue that doesn’t take its subject matter too seriously. It looks honestly at fundamental questions about what makes us human and how to we relate to something beyond us. Whether that is something like an afterlife or just a better life during the here and now is, gratefully, left open.

The work acknowledges and celebrates the close relationship to our animal nature, which too often gets ignored or denigrated. For coherence, the 75-minute, loosely-constructed episodes rely less on logic than on an emotional fabric woven by the wit, charm, and goofiness of its six performers: El Beh, Jennifer Chien, Kat Cole, Michael Mohammed, Rowena Ritchie, and Christopher W. White.

But how do these troopers suggest deep connections between our arboreal neighbors, not to speak of something called the future and us? The piece starts with the performers traipsing onto the stage chanting the refrain of the Pixies’ “Monkey Gone to Heaven,” whose lyrics portray a modest creature’s ascent through environmental morass towards the divine. Cole then recalls how she folded herself against a plate-glass zoo window — behind which a gorilla responded in kind. It became a transcendent experience for the human, and perhaps, the beast. Chien, for her part, lets herself be hogtied and yanked around as a sign of submission to an authority.

White then excitedly bursts onto stage with a scientific discovery that he thinks connects prayers, primates, and humans. Dopamine, which works on primates as well, he says, activates the pleasure center, but the anticipation of dopamine also produces this optimistic response, much the way prayer does. Is this an “a-ha” moment?

The choreography seems to say so, cleverly obliterating distinctions between human and animal movements by creating one fluid stream into which everyone dips: dancers hop, crawl, and walk on all fours; they fold their arms, genuflect, cross themselves, and pick lice off each other. When they sit on their haunches and begin to gently sway you certainly can’t tell which is which. Richie looked particularly in betwixt.

At one point the performers lie on their backs, engaged in a lusty monkey chant. They fight and they screech, and Mohammed explains his way of praying: a robust purging of himself. When all the dancers, except for Beh, knelt facing upstage for a Zen meditation, they quickly began to “ape” each others’ gestures, thus breaking their the trance, leaving Beh on her own.

Prayers — sung and recited — involved being grateful for a father with Alzheimer’s who had died. (I’m pretty sure also I heard one about someone who had bestowed herpes on somebody, and one about a lost cat.) The mundane and the weighty, the rational and goofy received equal consideration. That made for much of Monkey’s charms.

One of Monkey’s dramatically strongest sections involves the humans’ loss of the tail — Sonsheree Giles’ costumes had pinned stubs of them to their costumes. Toward the end, Ritchie and Beh, each on a column on either side of the stage, engaged in a lyrical paean about the tail — so soft, so pliable, so lush, so ever available and so sensuous and sexually alluring. It began to sound uncannily like an ode to a paradise lost. *