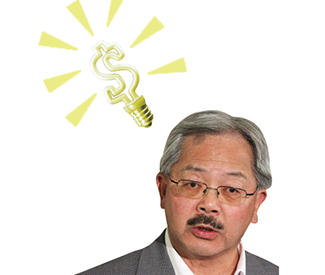 Jason Fried could barely believe what was coming out of the squawk box in his office at the San Francisco Local Agency Formation Commission on Sept. 10, as he listened to Mayor Ed Lee describe the CleanPowerSF program Fried had spent years helping to develop.

The program would give San Franciscans the choice of buying their electricity from clean, renewable energy sources rather than Pacific Gas & Electric’s oil, coal, hydro, and nuclear dominated power portfolio, a program that was finally able to become competitive with PG&E on price and still fund the creation of local clean energy projects.

But the program that Lee described — which three of his appointees on the San Francisco Public Utilities Commission have recently decided to block, against the wishes of the Board of Supervisors supermajority that approved it (see “Fizzling energy,” Aug. 21) — sounded nothing like the program that Fried, LAFCo’s senior program officer, knows so well.

As Lee described it, CleanPowerSF is “based on vague promises” and has “questionable environmental benefits,” claiming it has “gotten progressively more expensive” and “creates no local jobs.”

“What the San Francisco Public Utilities Commission did was in the best interests of the city,” Lee said. The city has spent untold hours and dollars over the last decade developing and approving CleanPowerSF.

“It was very frustrating to watch, particularly when you see him just making stuff up,” said Fried. “If he wants to be against CCAs [Community Choice Aggregation, that state-created program the CleanPowerSF is a part of], fine, just say that…But he wasn’t even getting his numbers right.”

Questioned by the Guardian following his monthly mayoral policy discussion at the board, where all five questions from frustrated supervisors were about CleanPowerSF, Lee cast himself as sticking to the facts.

“I know that elements of this are somewhat complicated because you have to actually read a lot of volumes of materials to understand the choice aggregation program,” Lee said, claiming, “I’m taking it exactly from facts that were presented.”

But in reality, Lee was cherry-picking facts that were either out-of-date or presented in a misleading way, while ignoring inconvenient questions like how the city can still achieve its clean energy goals without it, or why his appointees are subverting broadly supported public policy on technical grounds that appear to exceed their authority.

Take Lee’s claim that the CleanPowerSF program approved by the board “was 95 percent renewable on day one,” which he used to support his argument that “when the final project is so vastly different than the original intent, the SFPUC has to intervene.”

Lee is referring to the “three buckets” from which the program will draw its energy, as defined by the California Public Utilities Commission. Bucket 1 is the gold standard: juice coming directly from certified renewable energy sources in California. Bucket 2 is renewable energy that isn’t reliable and must be “firmed and shaped” by other energy sources, such as wind or solar farms supplemented by fossil fuels when there’s little wind or sunshine. And Bucket 3 is Renewable Energy Credits, which support creation of renewable energy facilities or green power purchased from other states.

Lee and other critics of the program decried the program’s cost of more than 14 cents per kilowatt-hour, while supporters worried the price would cause more customers to opt-out, so the SFPUC decided to allow more RECs, while also substantially increasing the amount of guaranteed green power.

“The difference between buckets two and three is not that big a difference,” Fried said, noting the Bucket 2 can actually include a substantial amount of dirty energy. “It really depends on how you’re firming and shaping.”

So the SFPUC increased the size of Bucket 1 to 25 percent and Bucket 3 to 75 percent, with idea being that RECs are only an interim step toward issuance of revenue-bonds to build renewable energy projects that would eventually fill Bucket 1 to overflowing. All for the not-to-exceed rate of 11.5 cents per kilowatt-hour that the SFPUC is refusing to approve.

“Our entire mix would be 100 percent greenhouse-gas-free, but the mayor is ignoring that because it doesn’t fit his ‘green’ argument,” Fried said, also noting that it would be generated in-state by union workers. “PG&E can’t make that same claim.”

CPUC statistics show PG&E derives less than the state-mandated 20 percent of its energy from clean, renewable sources, and that the percentage of its portfolio that is greenhouse gas-free actually dropped in 2012, to 51 percent from 59 percent in 2011. And despite Lee’s emphasis on local jobs, PG&E’s three largest solar projects built in 2012 are outside California.

By contrast, CPSF contractor Shell Energy North America wrote in an Aug. 12 letter that in addition to setting aside $1.5 million for local buildout after its first year, which “should create local jobs,” it is now negotiating in-state wind and hydroelectric (“operated by union labor”) contracts to meet the program’s demands.

But at this point, supporters of the program are running out of options to get that contract approved.

CleanPowerSF has broad political support in San Francisco, from Sups. David Campos, John Avalos, and other progressives, to moderates including Sup. Scott Wiener and state Sen. Mark Leno, who authored legislation to protect nascent CCAs from PG&E meddling and has been a steadfast supporter of CleanPowerSF.

“There’s a constitutional crisis, or a [City] Charter crisis, of sorts,” Leno said, referring to the standoff. “The legislative body has been unequivocal in its desire to proceed and it’s not for this commission to interfere with that decision.”

Leno said PG&E and its allies have played strong behind-the-scenes roles in sabotaging this program. “They are definitely exerting their influence,” Leno said, “they have never stopped trying to derail this.” SFPUC Chair Art Torres, who is leading the obstruction, didn’t return a Guardian call for comment.

If there is a silver lining, Leno said it’s that “PG&E has had to present its own version of green energy. But the two can coexist. We want competition.”

So does Fried, LAFCo, and all of the supervisors who sit on that commission, which has long tried to break PG&E’s monopoly.

“It’s close to checkmate, but we’re trying to breathe new life into this,” Sup. John Avalos, who sits on LAFCo, told us. “Part of the politics can be seen in the mayor’s statements, which are full of misinformation.”

Sup. David Campos, also on LAFCo, told us CleanPowerSF is “a good program, and it’s consistent with what the Board of Supervisors approved. I think it’s a mistake for the city not to move on this and it’s a bad thing for consumers.”

The newest member of LAFCo, Sup. London Breed, authored a resolution supporting CPSF that the Board of Supervisors was set to consider on Sept. 17, after Guardian press time. It recites a history of strong support for the program by the Board of Supervisors, starting with a unanimous votes in 2004 and 2007 to launch the CCA and continuing through the supermajority approval of CleanPowerSF and a $20 million appropriation to launch it in September 2012.

It noted that the SFPUC held 18 meetings on the program between September 2012 and August 2013, and that its Rate Fairness Board determined that rates for the Phase 1 are “technically fair.”

The resolution emphasizes an important governance issue at stake: “Irrespective of the particular policy decision, the Board of Supervisors must protect and defend its authority to make policy decisions.”

Yet there’s been a concerted effort to undermine CleanPowerSF this summer, led by appointees and allies of Lee and PG&E.

Breed said she was disappointed in Lee’s approach, although she takes him at his word when he says he’s open to alternatives.

“The questions were answered, but there wasn’t any closure in terms of what this means for the future,” Breed said. “If not this program, what’s the alternative?”

If the city is going to meet its greenhouse gas reduction goals, which call for reducing 1990’s carbon emissions by 25 percent by 2017 and 40 percent by 2025, it’s going to have to offer some alternative.

“We need to be aggressive about moving in this direction,” Breed said, “and we need to make sure the public has an alternative to PG&E.”