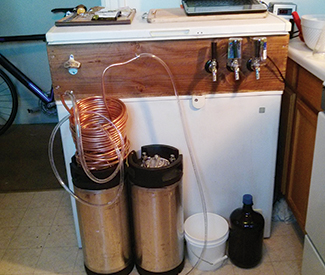 BEER + WINE It seemed to just appear one day, lurking around the corner of the kitchen entryway. It was huge, buzzing, rectangular, and nearly five feet tall. Its glossy belly gurgled with homemade California Common brown ale, a slightly off concoction, similar to a typical Anchor Steam beer, that nevertheless tasted quite fresh, and spewed forth from the newly attached tap.

And that’s when I learned to love the scrappy new project in my kitchen: the Frankenkeg. It’s a bulky, DIY kegerator pieced together by my husband, Marcus, over the past few months, after a homebrewing obsession that began a little over three years ago. And although it’s a work in progress, it’s a real beauty in the way you’ll always love the rescued dog you taught new tricks. Plus, with three taps, it churns out a pretty constant stream of the good stuff.

The whole homebrewing thing started off far more inauspiciously, after a few friends in the East Bay and Outer Richmond area began their own homebrew experiments.

“I just always thought it was too difficult, but once I saw [my friends] doing it, I was like, ‘okay, I can do this,'” says Marcus, a GIS specialist for an environmental nonprofit in the East Bay. “And you know, I always need a hobby, and this one involves making stuff. You get to make something and watch it grow.”

He began where many budding homebrewers in the Bay Area start: Brewcraft, a devoted homebrew shop in the Richmond district, led by brewmaster Gregory William Miller the Thirdstein, aka Griz. Griz, who also teaches free classes at the shop, was once quoted on KAWL as saying, “I learned how to brew out of the back of a Field and Stream magazine.” From my limited interactions with him at Brewcraft, it’s clear he knows a whole lot about the craft of beer.

Marcus learned through Griz’s store and also by going to San Francisco Homebrewers Guild events, like a recent one at Cervecería de Mateveza at 18th and Church, where the brewers crafted a Dulce de Leche imperial stout. The San Francisco Homebrewers Guild is a combination of two groups that merged in January 2013, in which there are 140 dues-paying members and nearly 500 in the Meetup group. The founder and president is Chris Cohen. Group VP Kevin Inglin says the experience level in the group is wide-ranging, “We have several brewers who have been at it for a decade or more and a large group of people new to the hobby.” Inglin, an Army officer who is working to open his own nano brewery with his wife in the city, started homebrewing in 1996 with an ingredient kit he bought from a display set up in the corner of a German bar, while living in the South. He’s since homebrewed in Tennessee, Alabama, Hawaii, Virginia, Texas, Germany, and California.

Marcus first picked up his kit from Brewcraft, which included a big glass fermenting jug. His initial recipes, cooked up on our stove in a huge boiling pot, were all from Griz. He’s since learned to switch up ingredients to form his own concoctions by listening to podcasts like The Jamil Show, and visiting websites including Home Brew Talk, the Homebrewers Association Forum, and the homebrewing subreddit.

And Marcus enters his beers onto online recipe toolkit, Brewtoad. The site helps keep a batch within the style and tells you how it will taste with all the ingredients because, “to me it’s a little bit abstract: you throw all this stuff in there; I know this thing will do that, but I don’t know how much of each. So it will tell you, if you add this much crystal 40 — a grain that adds color and sugars — this is what the final color will be, and if it’s within the style you’re trying to make.”

In the past few years, Marcus has made batches of Imperial stout, IPA, cider, black ale, and a hibiscus saison inspired by Pacific Brewing Laboratory, which we sipped at Outside Lands.

The kegerator idea came in when he realized he was spending entire evenings cleaning out old bottles, only to use the same bottles for the next batch of homebrews, usually enjoyed in our own apartment with friends, or at the park.

He started with the smallest piece of the equation, hence why I was so surprised by the final, monstrous outcome. At first, it was just the miniature gift box-sized temperature controller, which he got the idea for off a homebrew forum. The STC1000 is the part he got off Amazon.com, which is just the switch and the temperature probe. He attached that to a plastic project box, which he got at a hardware store.

Gathering up parts for the eventual kegerator, he found a deal online for four Cornelius (Corny) kegs on a homebrewing site. His kegs have the pinlock type of closure, and were originally used as syrup containers by the Coca-Cola company, likely at a fast food restaurant.

Next came the beast itself: the chest freezer, which would eventually hold the Corny kegs, a 20-pound CO2 tank, and that little temperature box attached to the outside, controlling the temp of the beer fermenting inside.

He picked up the chest freezer from another hobbyist on Craigslist, who lived in Oakley, near Antioch. The man raised pitbulls for show, had a garage full of fishing lures, and also raised pigeons — which explained why there was bird shit all over the chest freezer at first. It’s since been vigorously scrubbed down and lacquered with appliance paint then spray painted white.

On a sweltering weekend afternoon a few months back, our friends in Oakland helped us build a wood collar, which sits between the lid and the body of the chest freezer to give it extra height. It makes it roomier for the Corny Kegs and that oversized CO2 tank — which will likely fill around 20 to 30 kegs before it needs to be refilled. They also helped drill holes to attach the taps, because how else are we going to transform our apartment into a brewlab?

The beast was trucked to our third-story walkup and dragged into the kitchen with the help of those same friends. And now it sits, all seven cubic feet of it, chilling and cleansing two brand new batches of homebrew.

We cooked up both in the past week, one a pale ale and one an IPA. I used “we” liberally here, as I’m more of a sous chef, holding up pots and stirring when needed. The pale ale is a typical West Coast ale, in which we used Chinook bittering hops and cascade, and newer hop Amarillo, which “supposedly has a pineapple flavor.”

The IPA also includes a lot of Amarillo, along with simcoe for bittering, and citra at the end. The husband fears the IPA might be a bit too bitter for most palates, hence the more balanced pale ale, which will be ready to spill forth from the first tap come next month. The IPA might take slightly longer, as fermentation processes vary, and can take anywhere from a few days to months.

And to answer your question: yes, you’re all invited to the next tasting party.

For more information on the San Francisco Homebrewers Guild, see our Q&A.