Home Self service: SF Fringe Festival tells it like it is
WriterRobert Avila
SectionPixel Vision 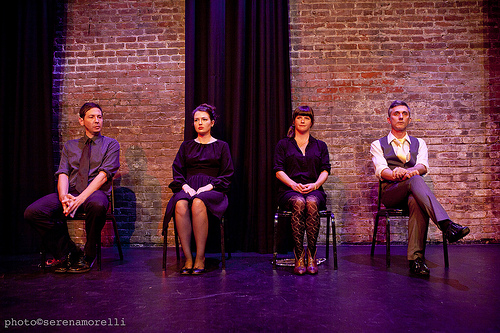 Note: this is an extended version of an article that appears in this week’s print version.

Sitting in the Exit Café with a can of Guinness and the San Francisco Fringe Festival program is one of life’s modest but absorbing pleasures. For those without much inside knowledge on the lineup (currently encompassing 36 companies and 158 performances), it’s a little like taking a vacation by pitching darts at a wall map. There were several immediate sub-themes to choose from for 2013. I could have picked shows with bananas in the title, for instance. But for whatever reason, I dived into the service and servitude sector.

Things began on a high note with Jill Vice’s witty and deft solo, The Tipped & the Tipsy, which brings the querulous regulars of a skid-row bar to life vividly and with real (quasi-Depression era) charm. Without set or costume changes, Vice (who developed the piece with Dave Dennison and David Ford) proves a protean physical performer, seamlessly inhabiting the oddball outcasts lined up before bartender Candy every day at Happy’s — names as loaded as the clientele.

After some hilarious expert summarizing of the dos and don’ts of bar culture, a story unfolds around a battered former boxer and his avuncular relationship with Candy, who tries to cut off his bar service in fear of his deteriorating health, much to the consternation and even greater fear of his barfly associates and the self-aggrandizing sleazeball owner, Rocco. With a love of the underdog and strong writing and acting at its core, Tipsy breezes by, leaving a superlative buzz.

This was largely squandered a half hour later in Sandra Brunell Neace’s Parly Girl, an uneven and unpersuasive testimonial by a New York City waitress with a bad attitude and a traumatic back story. Neace, whose incidental characters are weakly written and delivered, is best in fleeting moments of genuine reflection. But these are few, and the piece flags early on, only to be at best partially redeemed in a hasty turnaround of a conclusion.

Service work gives way to involuntary servitude, and the horrifying reality of child sex trafficking, in writer-performer and activist Regina Y. Evans’ 52 Letters (co-directed with Louel Senores). More than a global scourge, this is a local story, and Evans delivers it with burning compassion in a poetical voice ringing with the resiliency and freighted history of the African American spiritual. The emotional register varies little, which can weaken somewhat the force it justly means to convey. Nevertheless, Evans and her urgent message as a modern-day abolitionist leave one impressed and unsettled.

Schwartz’s Lenz remix comes across as an alternately cool and hyperactive investigation of the essence of melodrama, employing a fast-changing four-person ensemble (Nathan Tucker, Margery Fairchild, Ryan Hayes, Meg Hurtado) in a series of scenes shorn of their immediate context and aggregated under various section headings (“Love,” “Tricks,” “Sorrow,” etc.) The subheads are called out by Schwartz, seated at a table to the left of the stage calmly scrutinizing the action, asking the lighting booth for the odd musical interlude (MC5 one minute, Brahms the next), and bouncing his palm lightly on a desk bell to trigger the beginning and the end of each scene. These range widely and wildly, making for a raucous but tonally patchy hour. The broadest and subtlest range of characters comes from Tucker and Fairchild, who between them suggest some of the darker elements otherwise left out of a largely comic romp. But if the show leaves one wanting more complexity and shading, its eccentric enterprise is still worth a stab, as they say.

Finally, San Francisco dancer and performance maker Cara Rose DeFabio’s admirable solo strikes its own idiosyncratic tone, or rather many of them, in another intriguing investigation, this time of the online afterlife to which we are all increasingly subject — whether willingly or not. After the Tone is a smart and provoking exploration of the intersections of grief, technology, memory, ideology, and individuality that uses DeFabio’s sly narrative persona, movement, video, and audio pastiche, and interactive audience participation (via those celebrated and hated cellphones) to productively turn over a subject too close to most of us to be clearly grasped otherwise.