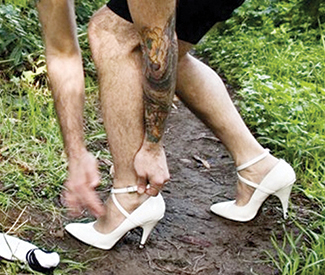 ON THE MOVE The epic Pacific Crest Trail winds 2,650 miles from Mexico to Canada, through sun-roasted desert expanse and snow-covered mountain pass, past rushing waterfalls and over wildflower-studded Alpine plateau, roughly tracing the Sierras and Cascades, always out of sight of civilization. It takes most hikers roughly half a year to make the whole trip, an isolating, immersive communion with nature that foregrounds self-reliance, endurance, and more than a little ingenuity when it comes to where you’re going to sleep and what you’re going to eat.

On June 21, Alex Falcioni, a massage therapist and teacher, took to the 1,230-mile leg of the trail running from Tuolumne Meadow, Yosemite, to Portland. In high heels.

“I’d always dreamed of doing the trail — but the most I could take off would be three months, so I knew I couldn’t do the whole thing” he told me over a “beat-up” phone from Ashland, hitchhiking his way back to the Bay Area after completing his high-heeled hike on Aug. 31st at Cascade Locks, Ore. “And then I heard that my dear friend Sarah had been diagnosed with multiple sclerosis and was having trouble covering her medical bills, so I decided to make the hike a fundraiser.

“I needed a gimmick, though, to draw attention. And that’s where the pumps came in — it really just came to me one day. I’d start in Yosemite, and wear the pumps to Portland. Mostly for the alliteration, ha ha.”

Falcioni’s project, Pumps 2 Portland, was partly inspired by Hiking26, a 2012 performance art piece by Ron Ulrich, who completed the entire PCT wearing 26 wedding dresses along the way. So far, Falcioni has managed to raise over $2,500. (Interested parties can still donate and read firsthand about Falcioni’s adventures at www.pumps2portland.com.)

The first obvious question: What kind of pumps were they? “Oh, a strappy white pair of size-12 slingbacks from a drag queen shoe store. They’re completely destroyed,” Falcioni said. “My toes look like little Vienna sausages. But my calves are rocks.”

The second obvious question: Come on, did he really wear high heels the whole time?

Falcioni laughs. “No way! There are ascents up to 10,000 feet and sometimes I felt afraid for my life in hiking shoes. Plus, often ‘trail’ is a relative word — it’s not like clicking down a paved sidewalk. But I wore them when I could, and I strapped them on my backpack for all the other hikers to see when I couldn’t.

“They were there to keep me inspired and add a little spark when the trail got so monotonous it was like sensory deprivation — like, ‘if I see another Ponderosa pine I’m going to go insane!'” With the heels it all became a outdoor runway.

“The pumps really opened doors, too,” Falcioni continued. “People I’d encounter on the trail would ask about them and that would help along a conversation. Or when I’d go into town… One of the ways you survive the trail is to mail food ahead for yourself. (You learn little tricks, like mixing spicy ramen with a spoonful of peanut butter equals Thai food!) So I’d have to go down into towns to pick that up, and I hadn’t bathed in a week — same shirt, same pants, covered in dirt and smoke. But showing off these huge pumps.

“That not only got the attention of the Trail Angels — people who dedicate themselves to opening their homes and helping out PCT hikers — but of random strangers, too. I made so many real friendships, had so many actual conversations about real things in these places of enormous beauty. Not to mention some free showers.

“It was an incredible experience to just put yourself out there at the mercy of nature, other people, and even yourself. I’d urge anyone to do it, giant man-heels or no.”

Nevertheless: Hey, Rupaul — I think we have your next location for Drag Race.