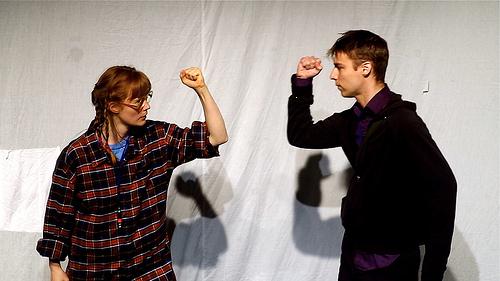 Here in Vancouver, the Fringe Festival has been in full swing since Sept. 5, and its early bustle has come as something of a welcome surprise. Shows have been selling out right and left, including those by the five-woman sketch comedy team Strapless, and the manic SNAFU Dance Theatre‘s survivalist romp Kitt & Jane. The buzz hangs as heavy in the air as the morning humidity. It’s interesting to compare the rowdy carnival atmosphere of the Edmonton Fringe, complete with sideshow attractions, tireless street performers, and mountains of cheap fried food and the people who eat it, with Vancouver’s more refined approach and oddience. The Vancouver Fringe is the biggest theater festival in town, I’m told, and therefore attracts a fairly large percentage of mainstream theater-goers.

But despite the fact that each show begins with an overly complicated spiel about sponsorship opportunities, the shows themselves have run the usual fringe-y gamut of content from heartfelt to hilarious, edgy to educational. Here are some of the standouts I’ve seen so far.

One of the bravest shows of the 2012 San Francisco Fringe was not actually a theatre piece at all, but an educational talk entitled The Revolution Will Not Be Circumcised, complete with video footage of infant (male) circumcisions that was decidedly not for the faint of heart. I see a lot of similarity in Tasha Diamant’s equally brave The Human Body Project, because when she takes the stage, naked and unscripted, the audience is immediately forced to examine their own reactions and assumptions around the act, the artist, and the body in general, leading to a tangibly cathartic yet thought-provoking collective experience.

Speaking of San Francisco Fringe, homegrown clown Summer Shapiro, whose Legs and All charmed at the festival in 2009, is here in Vancouver with a fun, interactive work, In the Boudoir; it’s a mostly silent comedy of a first date gone terribly awkward. In the same venue, the wry magic of Travis Barnhardt astounds in his mentalist routine Unpossible, during which he confesses several times that he hasn’t quite mastered the art before revealing that he clearly has.

Canadian storyteller Andrew Bailey, whose show Limbo I enjoyed in Edmonton, knocks one out of the metaphorical ballpark with his smart, compelling The Adversary. Matchstick, a two-person musical centered around a troubled, International love affair with political implications, impresses with its quick wit, inventive staging, and dynamic duo, despite some silly lyrics. Solo clown show Butt Kapinski follows a diminutive, speech-challenged “Pwivate Eye” down the mean streets and aisles of the small theater space, filled with cruel tenements, corrupt cops, and a bevy of working girls and murder victims (all unsuspecting oddience members), while the aforementioned Kitt & Jane wows with its energetic portrayals of a pair of angsty high school misfits who have one hour to save the world from itself.

Still looking forward to so much more, including Little Pussy, Model Wanted, Preacher Man, Kuwaiti Moonshine, Radio:30, The Cruelest Phone Book in the World, Against Gravity, Fools for Love, and 6 Guitars so I’d better get cracking. So little time. So many shows.