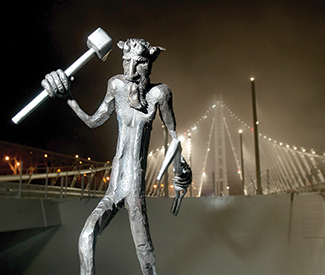 But when the crews were done, a new guardian for the Bay Bridge emerged: a small, steel troll, welded underneath the upper deck. He was a mystery to many, but not to all.

The good luck charm was crafted from the wreckage of the section collapsed by the earthquake by an iron worker who himself wishes to be in the shadows, much like his creation. The 18-inch-tall troll sports corkscrew horns and a long snaking tongue, his arms set permanently around a wrench, forever tightening (or loosening?) a Bay Bridge bolt. Shortly after he was birthed, iron workers rushed to affix him underneath the repaired eastern span before the top brass had a chance to nix the idea.

The troll stood snarling ever since. For more than 20 years, he’s been visible only to construction crews and passing boats, but he’s garnered a following (and even a Facebook group). To many, he’s the reason the eastern span managed to last the 20-year wait for a new bridge, wreck-free.

With the new span finally finished it came time for the bridge’s unofficial mascot to retire, and he’s vanished as mysteriously as he appeared.

“We the free and independent citizens of the Great State of California, request, no, demand, the immediate release of a fellow citizen, known simply as the Bay Bridge Troll who was unjustly evicted from its home and deprived of its livelihood,” the petition wrote. “Condemned not by a jury of its peers, but by a handful of bureaucratics [sic].”

We asked John Goodwin, a spokesperson for the Metropolitan Transportation Commission, if he knew the troll’s whereabouts. He was cryptic.

“Trolls appear magically,” he said. “I wouldn’t be surprised if he wasn’t being shuttled safe house to safe house.”

Some of the iron workers, it turns out, are like mother hens to the troll. They all want a turn at guarding the creature that protected the bridge, and their lives, for so long. “It’s like the Stanley Cup or something,” Goodwin said.

Ultimately, the old troll will have a place of honor at a museum near the bridge that should be completed in about six months, Goodwin told us.

But with the old troll going out, who would protect the new Bay Bridge eastern span?

A group called the “Troll Bridge Program Oversight Committee,” with members from Caltrans, the Bay Area Toll Authority, and the California Transportation Commission, came up with an answer: make a new one.

In their report “For Whom the Troll Dwells,” they say why: “While no causal relationship can be established between the presence of the Bay Bridge troll and the absence of any earthquake-related interruptions to the Bay Bridge’s service during the past 24 years, the correlation cannot be denied,” the report states. “Following the Latin principle, Primum non nocere, (First, do no harm), the Project Management Team further recommends that another troll statue be created to guard the Bay Bridge.”

And now, with a new span, a new troll will take up the mantle of protecting the bridge. Constructed by a new anonymous artisan, the new troll has smaller horns, with a sledgehammer in one hand and a blowtorch in the other. He was even present for the grand opening of the bridge for a photo op.

But, many have wondered, aren’t trolls evil creatures?

For ironworker and troll folklorist John Robinson, that’s simply not so.

“Now trolls feature prominently in Scandinavian folklore and particularly in Norwegian folklore and can be friendly or harmful depending on how you treat them,” he told the Guardian. “Think of Shakespeare; you ever seen a Midsummer Night’s Dream? They go into the forest with creatures, and the character Puck is a trickster.”

To Robinson, trolls can be helpful or harmful, based on what you want from them or expect from them.

Let’s all then hope the new troll protects our bridge, and the lives of the workers who maintain it, for many decades to come.