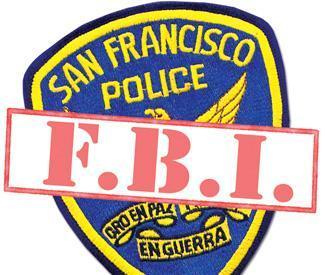 news@sfbg.com
A high-profile local civil rights ordinance passed last year to shine light on the San Francisco Police Department’s joint activities with the FBI has been undermined by the SFPD’s refusal to disclose its surveillance activities. This comes at a time when the public is learning more than ever about the federal government’s intrusion into the privacy of law-abiding US citizens.

In May 2012, the Board of Supervisors unanimously passed the Safe San Francisco Civil Rights Ordinance, which Mayor Ed Lee signed in a photo-op ceremony with Police Chief Greg Suhr and the activists who supported it. They claimed the board’s passage of the ordinance ushered in a new era of transparency over the SFPD’s previously secretive work with the FBI-led Joint Terrorism Task Force.

“The ordinance basically requires three things,” Nasrina Bargzie, a civil rights attorney at the Asian Law Caucus who worked on the measure, told the Bay Guardian. “The first part requires that the Police Department work with the JTTF has to follow the California constitutional rights of privacy, so they’re not following the lax standards of the [US] Department of Justice. The second part is that they can no longer enter into any secret agreements with the FBI; it has to go before the Police Commission in a public setting. The final part of the ordinance exists to make sure the rules are being followed, so there is a requirement for a yearly report.”

At the time of its passage, activists told the Guardian that the ordinance was only as strong as the SFPD’s willingness to disclose its activities (see “Mayor Lee signs watered-down limits on SFPD spying,” 5/9/12). But the SFPD’s refusal to disclose even minimal, basic information calls into question the ordinance’s value.

After the release of multiple reports earlier this year that activists called inadequate, Suhr is now maintaining silence regarding the JTTF, while claiming the department is in full compliance with the ordinance. According to Bargzie, Suhr told her the FBI is barring him from disclosing the requested information.

Following multiple efforts by the Guardian to get a comment out of SFPD about the ordinance and whether the department was indeed taking a subservient role to the FBI, SFPD Sgt. Dennis Toomer told us, “We’re not talking about that at all.”

Activists have sparred with Chief Suhr over implementation of the ordinance and its required annual report since at least the beginning of 2013.

Deputy Chief John Loftus presented the first report to the Police Commission on Jan. 23, which claimed the SFPD was in “full compliance” with the ordinance without providing any details. Activists and the public quickly demanded a real response.

“The commission presented this short oral report, which was a little short of two minutes long,” Bargzie told us. “There was no data that we were not already aware of. It was just basic statements claiming that they were complying with the ordinance.”

Suhr apologized for the omissions while stating his department was still in compliance with the ordinance’s guidelines, pledging to be more forthcoming. At this time, SFPD Sgt. Michael Andraychak told the Guardian: “The Chief’s Office is in the process of scheduling meetings with Nasrina Bargzie [of the Asian Law Caucus] to develop a report with more detail so those concerned and the public can be as informed as possible. Chief Suhr is committed to remain in compliance with the ordinance.”

The Coalition for Safe San Francisco, an activist group consisting of Muslim Legal Fund of America, Asian Law Caucus, and dozens of other groups, met with Suhr to discuss setting up a template for the reports.

Suhr then released a second report, which contained more relevant information, stating that SFPD officers did not act as informants in 2012 and three full-time SFPD officers were assigned to the JTTF.

But the report still omitted key oversight information, such as whether any prosecutions resulted from JTTF and SFPD investigations, which would allow the Muslim Legal Fund of America and other groups to determine who the SFPD is arresting and why.

Last year, Suhr told a San Francisco Examiner reporter that his officers followed up on 2,000 tips regarding counterterrorism activities. However, this information curiously did not make it into the official report.

“We contacted the chief to let him know we were not okay with this. We had another meeting with him and he said he’d think about it and get back to us and now he is claiming he cannot honor a basic component of the ordinance,” Bargzie told us. “He asserts in writing this is because the FBI will not let him share the basic information.”

The weak efforts behind the implementation of the SSFCRO date back to Mayor Lee’s veto of a stronger ordinance in April 2012, which would have codified privacy protections and given the Police Commission more power to stop FBI-SFPD activities that did not comply with Department General Order (DGO) 8.10, the 1990 policy aimed at protecting First Amendment activities. After Lee’s veto, the Board of Supervisors passed a weaker version. Both were sponsored by Sup. Jane Kim.

John Crew, a former police practices expert with the Northern California American Civil Liberties Union, raised concerns to the Guardian about the weakened legislation. “It is a step in the right direction, there’s no doubt it’s progress,” Crew told us at the time. “But whether it’s real progress depends on the implementation. Ultimately, it will come down to political will at the Police Commission to enforce privacy protections.”

Much of the ordinance’s failure stems from the apparent lack of real intent to disclose what the activists sought. Critics painted the SSFCRO signing ceremony as a hollow symbolic act, a way for Mayor Lee and Chief Suhr to publicly promote civil rights and progressive ideals with an ordinance they purposefully weakened.

“My sense is that [the SFPD] is not taking this seriously,” Bargzie told us. “I think they probably believe that they are providing as much information as the FBI will let them and Chief Suhr thinks it’s fine that the FBI can tell him to share what they tell him to.”

The lack of transparency regarding the JTTF’s work with the SFPD requires the public to trust the federal government to safeguard civil liberties. But in the wake of whistleblower Edward Snowden’s leak exposing the expansive surveillance system by the National Security Agency and the SFPD’s notorious history of illegal surveillance and racial profiling, the public has little reason to trust the authorities.

HISTORY OF SPYING
The passage of the SSFCRO is the latest effort to counter a long history of racial profiling, spying on radical political groups, and other constitutional violations, episodes that have been followed by progressive reforms in San Francisco.
Prior to the passage of DGO 8.10 in 1990, the SFPD notoriously participated in the surveillance of non-criminal, pacifist political organizations. During the 1984 Democratic National Convention, the SFPD carried out surveillance on law-abiding organizations and, throughout the 1980s, it created files on civil, labor, and special interest groups in the Bay Area, revelations that led to the adoption of DGO 8.10.
But even after that, disclosures surfaced showing that the SFPD was blatantly violating its own rules. They included then-Police Chief Tony Ribera admitting that files on non-criminal political activity were not destroyed (as required by the ’90s reforms), the selling of confidential intelligence material to foreign governments and private entities, and the actions of SFPD Intelligence Officer Tom Gerad, who informed on local political groups for the FBI.
In the subsequent years following the Gerad scandal, San Francisco sought to strengthen DGO 8.10, requiring more transparency and oversight. But this progress was undercut in 2007 when the SFPD secretly signed a secret JTTF Memorandum of Understanding (MOU) undermining DGO 8.10.
San Francisco’s Human Rights Commission held hearings in which the community voiced concerns over illegal police and federal surveillance. In response, the SFPD said they were unable to discuss arrangements with the JTTF without the permission of the FBI.
In 2011, the previously secret MOU was unearthed by the ACLU (see “Spies in blue,” 4/26/11), prompting Suhr to issue Bureau Order #2011-07, which reinforced that SFPD personnel were under the jurisdiction of local and state privacy protections and did not spy on law-abiding groups. SFPD Public Information Officer Albie Esparza said the order reversed the language of the 2007 memo.
Part of Suhr’s amendment to SFPD policy at the time included the necessity of a predicate offense in all SFPD investigations. Thus, the SFPD could not investigate or spy on those who were not suspected of violating the California Penal Code or federal law.
Activists wanted those protections enshrined in city law, which resulted in last’s vetoed ordinance and passage of the watered down Safe San Francisco Civil Rights Ordinance in 2012, which activists now say they feel duped by.
“We have been extremely disappointed at the lack of information that has been included in the reports,” Summer K. Hararah, Regional Director for the Greater San Francisco Area Muslim Legal Fund of America told us. “If the SFPD is going to violate rights of Arab-Americans, the police chief has a responsibility to stand up to the FBI.”

POST 9/11 WORLD
Lax federal guidelines for counterterrorism have been building since the Bush Administration began implementing emergency measures after 9/11 terrorist attacks in 2001. In San Francisco’s case, the FBI has subjected local law enforcement to these rules.
Since 9/11, both the ACLU of Northern California and the Human Rights Commission have publicized cases of racial profiling and surveillance of pacifist, non-criminal Muslim and Middle-Eastern groups in San Francisco. A 2007 FBI memorandum illustrated a prominent instance of this profiling in which FBI agents attended Ramadan Iftar dinners in San Francisco purportedly as part of the FBI’s mosque outreach program. Under this guise, the agents collected data on certain attendants, including names, the content of conversations, and other information covered by the First Amendment. According to the FBI Domestic Investigations and Operations Guide, the JTTF is permitted to conduct surveillance of this nature, by identifying “locations of concentrated ethnic communities in the Field Office’s domain, if these locations will reasonably aid in the analysis of the potential threats and vulnerabilities, and, overall assist domain awareness for the purpose of performing intelligence analysis.” These policies directly contradict SSFCO, DGO 8.10, and the California Constitution’s privacy protections. In Portland, Ore., the local government successfully fought this issue by bifurcating local law enforcement from the JTTF after the public and the ACLU raised concerns over similar constitutional violations and racial profiling. This Portland model is now a precedent for activist groups nationwide, seeking to end the lack of oversight permeating their local police departments. “Portland has been a great model,” Hararah told us. “When the FBI began to interview Muslim men in mass after 9/11, Portland was one of the few that said ‘absolutely not.'” But in San Francisco, Lee (whose office also didn’t respond to our request for comment) and Suhr’s symbolic promotion of civil rights has diminished into a case of them basically bullshitting the public. “Civil rights is not a symbolic issue,” Hararah told us. “The mayor backed this legislation and we want to see that the commitment is put forth with global insurance. The first step is having info about what the JTTF is doing to be sure it abides by human rights protections and is appropriate.”