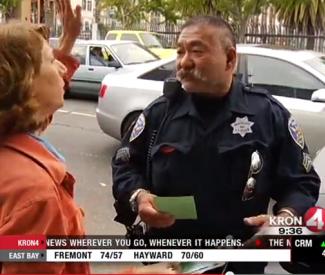 UPDATED In the wake of revelations of shoddy and insensitive police work related to the Aug. 14 death of 24-year-old bicyclist Amelie Le Moullac, who was run over by a commercial truck driver who turned right across her path as she rode in a bike lane on Folsom Street at 6th Street, Sup. Jane Kim today called for a hearing on how the SFPD investigates cyclist fatalities.

The issue has lit up the Bay Guardian website with hundreds of reader comments after we wrote a series of blog posts and our “Anti-cyclist bias must stop” editorial, including our revelation that the SFPD failed to seek surveillance video of the crash even as its Sgt. Richard Ernst showed up at an Aug. 21 memorial to Le Moullac to denigrate cyclists and make unfounded statements about the fatal collision.

Police Chief Greg Suhr later apologized for Ernst’s behavior and the flawed investigation and said that surveillance video unearthed by cycling activists led to the conclusion by a police investigation that the driver who killed Le Moullac was at fault, according to Bay City News and SF Appeal, which also reported on Kim’s call for a hearing.

As we reported, motorists are rarely cited in collisions with cyclists or pedestrians, even when there’s a fatality involved and the motorist didn’t have the right-of-way, which appears to the case in Le Moullac’s death. The District Attorney’s Office, which did not immediately return a call from the Guardian, is considering whether to bring criminal charges in the case.

UPDATE: We just heard from DA’s Office spokesperson Stephanie Ong Stillman, who said, “The San Francisco Police Department has delivered a preliminary investigative package and we are in the process of reviewing it to determine what additional investigation is necessary.”

UPDATE 9/5 5pm: San Francisco Bicycle Coalition Executive Director Leah Shahum says she welcomes Kim’s hearings, which are long overdue. “We’re really thankful to Jane for bringing this forward,” Shahum told the Guardian, saying she hopes the hearing results in changes to how the SFPD investigates cyclist fatalilties. “We want to make sure there is ongoing accountability.”

She also said the San Francisco Municipal Transportation Agency has indicated to SFBC that it is working on near-term and long-term improvements on both Folsom and Howard streets, where cyclists in bike lanes must regularly contend to drivers cutting them off. The city does seem committed to a significant pilot of better bikeways there.”

Meanwhile, as the San Francisco Examiner reported today, Le Moullac’s family has filed a civil lawsuit against the driver who killed her, Gilberto Oriheaula Alcantar, as well as the company that he was driving for, Daylight Foods Inc., alleging that he was negligent in driving too fast and failing to pulled into the bike lane before making a right turn from Folsom onto 6th Street.