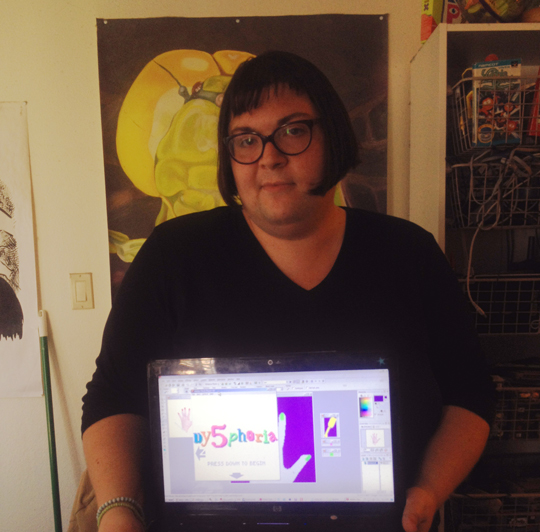 Video games go to alien worlds all the time, but rarely have they explored a transgender person’s identity until Dys4ia. The 2012 Adobe Flash game traced designer Anna Anthropy’s hormone replacement therapy journey, guiding the player through trying on women’s clothing for the first time, dealing with the agony of shaving, and correcting all the people who call you “sir” instead of “ma’am.”

Anthropy was kind enough to let the Guardian interview her in her Oakland home, dodge her energetic cats, and record an audio interview where she walks us through her new game, Dy5phoria, the new chapter and pseudo-sequel to Dys4ia. You can also read a selection from the audio interview below.

SF Bay Guardian How do you pronounce the new title?

Anna Anthropy I’ve been calling it Dys-five-ia out loud, but it’s spelled like Dys4ia with a 5 instead of an S.

AA Dys4ia is made up of four chapters which represent different times in my life when I was starting to go on hormone replacement therapy. Dy5phoria which will come with Dys4ia is a fifth chapter that follows what’s happened in my life since the place Dys4ia ended.

Listen to the full 26 minute interview in the Sound Cloud file above.

SFBG Can you talk about what seperated it from mainstream games?

AA Oh god I’m so sick of talking about Dys4ia, but I will! It’s essentially a collection of short fast scenes, kind of like Wario Ware, that represents the different facets of what happened to me in this part of my life. The frustrations of dealing with gatekeepers and being misgendered. It’s also about the moments of beauty and hope that reassure me that things maybe are getting closer to how I want them to be in my life.

SFBG What were those moments of hope?

AA One of the things that happens to me in Dys4ia is my tits get bigger, and that was nice.

One of the things in Dy5phoria that has changed is the ways I’ve externalized my femininity more and felt prettier and better about being a girl. It was important that mixed in the bullshit I put in the reasons about why this is important to me.

SFBG Can you talk about how Dy5phoria is different than what came before it?

AA In Dys4ia the avatars in the scenes are really inconsistent. Depending on the context I might be a blobby stick figure, or a shield, a razor, a little munchy thing depending on the experience. My body was going through flux at the time, it made sense for the game to represent that by not having a consistent avatar. In Dy5phoria all the levels have a consistent avatar that look like me and who I’ve become comfortable being.

There’s a different motif in the game, there’s some consistency now, some sort of permanence.

AA Kind of. I don’t want it to be Nintendo retro because I think thats twee and bad, I think that’s overused.

SFBG Tell me where you are in development and what you’re doing today.

AA My process for this game is that every day I sit down and do a single scene. The one I’m working on today is about painting my nails, and the ways I’ve found to externalize my femininity more. The level is just that: a hand with a nail polish brush. Its just that.You paint my nails, and then its over.

SFBG Well thats the power of videogames right? You carry out the narrative act, as opposed to simply watching it. You mentioned the TSA level earlier. What happened to you and what’s the problem making that read well?

AA There’s a level in Dy5phoria when I was groped by the TSA at the airport. The way that big horrible scanning thing works is there’s a button with a female and a male button. I’ve had it go either way. This particular time I got scanned as male. On the screen parts of me came up as suspicious areas, and there on the screen there were squares around my tits.

My tits came up as an anomaly, and this guy (security) was obliged to grope my breasts. I’m attempting to translate this to a scene in Dy5phoria. I don’t think it’s reading as well as it could because it’s a bit too complicated.

SFBG Do you think your game designer chops have improved since you did Dys4ia?

AA It’s more like my interests have changed. I’m a lot less interested in making digital games than I used to be. I’ve sort of been envisioning what a fifth chapter of Dys4ia would look like, but when the opportunity came I’m actually more interested in board games than sitting down and coding a game. This is the last game I want to code myself, but I kind of have to because Dys4ia is all mine, all my project. This is kind of a closing of the book for me, in a lot of ways.

AA It’s not that I won’t do digital games again, I’m actually announcing a new game at Indiecade. I just don’t want to do the programming myself. I’ve always learned the coding I needed to do, a mish mash. That’s why I work on Twine games because I don’t have to do any coding. Dy5phoria will be the last project I’ll code myself but it won’t be my last digital game.

SFBG You mentioned you’re sick of talking about Dys4ia, but when I was at GaymerX I met this gal who recently transitioned her gender and was working at your workshop there. She has so completely totally inspired by you. You should have seen her face.

AA I did in fact see her face, she came up to my autograph session, and told me the game was meaningful. Those comments make me feel really good. I’m sick of answering questions about Dys4ia but I’m not sick of hearing it means something to people. That’s why I do anything, I want to make things that will actually connect with people. She told me and other people have told me Dys4ia gave her the confidence to make the decision to start going on hormones.

Hormones have been positioned as the central experience of being trans, which I don’t think is good, because there are trans people who don’t go on hormones. But for those people that are thinking of going on hormones is I hoped Dys4ia would give some sense about what that would be like an the challenges and really really nice things of being on hormones would be like. If it has done that for people I feel accomplished in that regard.

SFBG And it seems sometimes you’re at the center to this kind of very indie, very LGBT conscious, very different game movement that seems to be happening a lot here in the Bay Area and other places as well. Can you talk about what’s bringing the rise of that about?

AA I think what’s important to outsiders of the mainstream game industry that the industry is mostly pitching to straight cis males. I think what’s making it possible for people to participate are tools like Twine, a hypertext tool where only recently people started realizing they could use it to make games.

Because the tool is so simple if you’re capable of writing you’re capable of making a game with Twine. You can make almost journal style, personal games. There are a lot more autobiographical games coming out with this tool.

The industry is spending millions to make games, they don’t have the liberty to make something risky and personal and weird. If something takes a few hours to make or a few days or a week, you can make what you want.

D5phoria is due out on Steam in the fall. You can play the first in the series, Dys4ia, here.