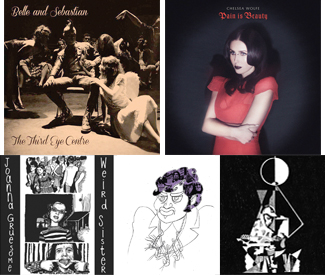 6 FEET BENEATH THE MOON

Archy “King Krule” Marshall may look like a callow school-kid, dressed up in his father’s suit, but the South Londoner has the soul and voice of a wise, world-weary bluesman three times his senior. 6 Feet Beneath the Moon — his long-awaited debut LP — is an astonishing achievement, displaying Marshall’s nuanced storytelling, exceptional jazz-based guitar work, and versatility. Over the album’s 14 tracks, he weaves affecting tales of urban ennui, malaise, and disaffection, balanced by fleeting moments of ardent love and nostalgic surrender. Though he wears his influences on his ill-fitting sleeve (Drury, Strummer, Morrissey, Dilla), the finished article sounds like nothing else out now — with dark wave, blues, punk, indie, and electro all thrown into the mix. It is all filtered through Marshall’s singular lens and mature perspective, creating a fresh, cohesive sound while painting an engulfing portrait of his London. — Daniel Alvarez

Belle and Sebastian, ’90s twee sweethearts, are at it again — kind of. This time, the band is serving the general public a tray of audible assorted snacks featuring b-sides from the latter half of its career. Dubbed The Third Eye Centre, no song sounds the same — one track will boast a rockabilly twang (“Last Trip”) and another will be a previously unreleased remix of fan-favorite “Your Cover’s Blown (Miaoux Miaoux Remix).” It’s a solid album, but it’s easy to suss out the dated songs, such as “Suicide Girl,” an anxious love song about the object of singer-guitarist Stuart Murdoch’s affections, an alternative girl that wants him to take nudes of her for the famed early-2000s “punky” soft-core porn site of the same name. But in all, the fun of The Third Eye Centre is getting the chance to hear songs you may have not had the chance to listen to from the back end of Belle and Sebastian’s jam-packed catalog. — Erin Dage

For those who have oft pondered “What if a soul band and a Southern rock group got together and made sweet, beautiful music?” weirdo psychedelic soul band King Khan & the Shrines has the answer with its latest release, Idle No More. Featuring dancey soul numbers like “Luckiest Man,” Stooges-esque songs such as “Thorn in Her Pride,” ditties with ’60s girl group-esque guest spot vocals like “Pray for Lil” — Idle No More combines many genres and musical elements to form a cohesive, well produced album. The album can easily be separated into three acts: dance numbers, slow-ballad interlude, and soul revival resolution. Six years have passed since previous album, What Is!?, and Idle No More has definitely been worth the wait. — Dage

There’s always been this brutal, animalistic thread woven throughout Chelsea Wolfe’s output, and Pain is Beauty is no exception. The LA-via-Sacramento artist’s otherworldly vocals tend often to translate into a wild creature elegantly whipping through a foggy forest. (Indeed, Wolfe described her newest LP as a “love-letter to nature.”) Her powerful soprano hollers are matched to ethereal whispery echoes, maintaining a balance between lightness and darkness, which has become a common theme in her work, as it is in nature. And this vocal balance is a mainstay in Wolfe’s music, no matter what’s backing it instrumentally. Her previous release, 2012’s Unknown Rooms: A Collection of Acoustic Songs, was, obviously, acoustic, but the sparse record is still deeply unsettling. With Pain is Beauty, the singer-songwriter returns to a darker, grittier sound. And yet, there’s a more electronic twist on her early doomy experimental guitarwork (as with breakout 2011 record Apokalypsis), bursting with both synths and strings this time, without missing the black-hearted emotional core rooted in all living things. — Emily Savage

Jangly noisepop cacophony with pro-feminist and anti-homophobia lyrics — this Cardiff band’s debut full-length, Weird Sister, hits all the right hot spots and makes them tingle. Plus there’s the name, Joanna Gruesome, a cheeky play on a gentle fellow musician. But Weird Sister speaks for itself, with standout tracks like opener “Anti Parent Cowboy Killers” matching dissonant guitars and pounding drums with lovely melodious vocals that rise into screams at the hook, akin to the Vaselines in bed with L7. There’s also classic K Records-evoking twee ode “Wussy Void,” and jagged noiseball “Graveyard,” which starts off with what sounds like helium seeping out of a balloon. The record includes songs from a 2011 EP, “Sugarcrush,” “Madison,” and “Candy,” further deepening the getting-to-know-you state of the Welsh quintet, a group to which you do need to start paying attention. —Savage