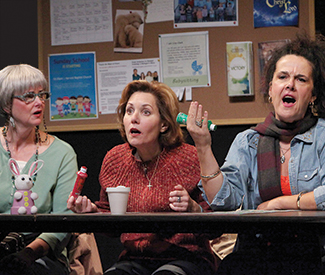 THEATER Marin Theatre Company’s season opener, David Lindsay-Abaire’s Good People, tackles issues of class and solidarity in the context of a small circle of South Boston peers. It’s an issue the play explores with some subtlety, if not always with the full weight of a historical moment as dire as any when it comes to the stratification of income, power, privilege, and status.

Margaret Walsh (Amy Resnick) is a scrappy, middle-aged single mom with a grown but severely impaired daughter. A quick but harried working-class woman (persuasively played with underdog vigor and a complex moral makeup by Resnick), Margaret is a high-school dropout confined to both menial jobs and her old Southie neighborhood — an Irish enclave ringed by creeping poverty and the cyclical violence and dysfunction that can cling to it.

Perennially late, Margie (as she’s usually called) is about to be sacked from yet another job, this one at the local dollar-store register, where her young manager, Stevie (Ben Euphrat), is the quietly striving, just-tolerant son of a deceased friend from the neighborhood.

Significantly, Stevie’s late mother lives on among her peers in the form of a beloved and oft-repeated anecdote, in which she attempts to cover up in the moment for a brazen act of grocery-store shoplifting. But the story, which Margie tries to leverage to advantage in her bid to keep her job, has a contested aspect: Was it Margie, working a register then too, who turned her in for it?

It turns out this question — with its suggestions of tenuous loyalty, honesty, and honor among Margie’s hard-bitten peer group — is just a warm-up for a larger moral contest looming ahead.

Soon Margie moves in with longtime friend Dottie (a comically boisterous and truculent Anne Darragh), but Dottie’s new position as fretful, bullying landlady is never far from their interactions. With encouragement from her pal Jean (a sure Jamie Jones), Margie — desperate to find work but too proud to return to the Gillette factory (perpetual employer of last resort) — seeks out an old classmate, Mike (an excellent, subtly shape-shifting Mark Anderson Phillips). He once briefly dated Margie in high school, before going off to college and medical school, ultimately escaping Southie for upper-middle-class Chestnut Hill.

It’s Margie and Mark’s reunion that provides the meat of the drama. Margie is a proud but desperate interloper in Mike’s now thoroughly bourgeois world, and needles him about his class pretensions as a method of maneuvering to some advantage in her quest for his help. She’s also haunted by an idea of what might have been her life if she had escaped Southie, like (or with) Mike. At the same time, in his new milieu, Mike draws heavily on a macho, street-smart, bootstraps image he has fashioned from his past — ostensibly to make up for a certain effete status vis-à-vis his wife, Kate (ZZ Moor in a bright, well-measured and quietly ferocious performance), the sophisticated, upper-middle-class African American daughter of Mike’s old boss and mentor.

Mike and Margie’s reunion, therefore, seesaws on a fulcrum of status, class advantage, street cred, and secrets. And if class tends to trump race in the play’s particular admixture of power, race remains a crucial part of the story — rushing back from Mike’s Southie past in a way that drives another wedge between the married couple’s already strained partnership.

Despite being initially top-heavy with self-conscious Boston accents, director Tracy Young’s admirable cast soon stretches out into some extended and nuanced scenes. Particularly impressive are Resnick, Phillips, and Moor who, in the second act’s opening sequence in Mike and Kate’s luxurious Chestnut Hill home, bring the play’s themes into full swing with slow-burning intensity.

Interestingly, opening night saw by far the biggest laugh go to a seemingly throwaway line. After Margie crashes an evening at Mike and Kate’s home, Mike idly asks his unwanted guest if she likes the wine his wife has offered her. “How the fuck should I know?” retorts Margie, not unkindly.

Wine, and especially the appreciation of wine, is of course heavily class-coded, and the whole scene is an understated class rumpus of sorts. But the rolling laughter this line provoked among the generally comfortable Marin County audience probably spoke to more than just knowingness on that score. It sounded like a genuine, joyful release — an acknowledgement, maybe, that class is a burdensome masquerade, and in its pretense and hidden anxieties it’s exhausting, including for those with passes and pretensions to a certain elevation on the ladder. Although that burden is incommensurate to the physically and psychically wrecking demands, degradations, and insecurities saddling those on the lower rungs, it’s in the “conceit” of class that the play opens common ground with the audience. *