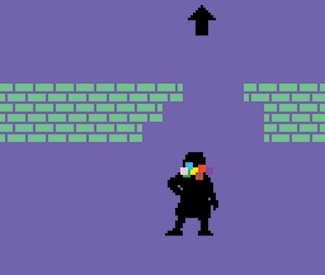 GAMER Gamers who’ve grown weary of blasting aliens and other generic supervillains need not worry: the Bay Area’s indie video game designers share your pain. There’s an indie game revolution being birthed right here in our backyard, led by a cadre of designers who really couldn’t give two flying flamethrowers about making another first-person shooter. The best part? The games are all (mostly) free.

Video games go to alien worlds all the time, but rarely have they explored a transgender person’s identity until Dys4ia. The 2012 Adobe Flash game traced designer Anna Anthropy’s hormone replacement therapy journey, guiding the player through trying on women’s clothing for the first time, dealing with the agony of shaving, and correcting all the people who call you “sir” instead of “ma’am.”

It only takes a moment before you want to slap each pixilated person who blurts out “sir” — and that moment personifies gaming’s unique power to make a player experience someone else’s life. Anthropy (www.auntiepixelante.com) runs with that concept, yanking and pulling the player (willingly) along the transition into her new gender identity.

Anthropy’s new release, Dy5phoria (note the subtle title change), is not quite a sequel to the original, she says. It’s a rerelease of the original game with a brand new chapter, one where she tells the story of finally learning to be comfortable with her new self. The new scenes have more detailed animations than the first release, and though Dy5phoria shares the original’s nebulously retro pixel style, the character you control on screen is a fully formed person. This was a conscious choice, Anthropy explains.

“In (the original) the avatar you controlled changed depending on the context. You might be a blobby thing, a shield, or a little munchie mouth thing,” she says. “My body and identity were going through a lot of flux at the time, and it made sense for the game to represent that by not having a consistent avatar.”

Clearly, this is a new frontier for games; a girl who recently started her journey transitioning told the Bay Guardian that Dys4ia gave her the confidence to make the decision to begin hormone therapy and come out to her parents. Though Anthropy notes that hormones aren’t necessarily the central experience of being trans, she was touched Dys4ia could help people.

D5sphoria will be available via download service Steam “when it’s done,” Anthropy said, which will likely be at the end of fall or slightly later. The original Dys4ia flash game is available at www.newgrounds.com, a website stuffed full of indie games. It’s free to play, and simple enough for even casual gamers to get through in less time than an episode of the Big Bang Theory.

Read our Q&A with Anna Anthropy and hear our audio interview with her here.

CLIMBING 208 FEET UP THE RUIN WALL

Available at aliendovecote.com; free to play in any web browser

“Leave the tomb behind, and with all your stolen riches, return to the land of the living.” Once you click “return,” you’ve started your climb. Where do you go next?

That’s a question most Twine games ask, as the text-based games mostly resemble the choose-your-own-adventure books of a 1980s childhood. Climbing is one of the better, briefer ones, and though the adventure ultimately is linear, the branching paths will make you chuckle and make you think.

Climb. Climb. Climb. And when you’re done, check out twinehub.weebly.com for even more text-based Twine games. You can also learn how to make your own.

Available at www.mkopas.net; free to play in Flash-enabled web browsers

Have you ever sat with someone playing Halo, and heard the TV calling out “triple kill, KILLING SPREE!” and other lovely hyper-masculine achievements? Well, now’s your chance to go on a hugging spree.

HUGPUNX is described as a “fluoro-pink queer urban hugging simulator” — and indeed, players basically run around doing just that. Hugging. People. Lots of them. The music is fun and light, and you’ll be shimmying in your seat while you play. The game is simple to control — use the arrow keys to move, and Z to hug. Plus, you can hug giant cats. The world needs more games where you can hug giant cats.

CRYPTWORLDS: YOUR DARKEST DESIRES COME TRUE By Cicada Marionette Available at www.cicadamarionette.com; free in PC, MAC, and LINUX versions Missed Burning Man? This game may be a nerdy substitute to the insanity of the desert. Played a bit like The Legend of Zelda, the game (created by a Texas-based developer) begins with the player talking to the folks in surrounding towns and crypts, performing fetch quests and collecting inventory items. Unlike Zelda, though, a crypt filled with human sacrifices (who all sort of look like Indiana Jones), a horse-god, and a “programming hell” await you. Hundreds of nerds in plaid pants stand by their desks around a flame, or a volcano, I can’t quite tell. But don’t worry — once you escape, there’s a pulsating monster that resembles somebody’s liver just above you. Bring your favorite Burning Man party favors and play this game in the dark for hours. * For a podcast interview with Dy5phoria‘s Anna Anthropy, visit www.sfbg.com.