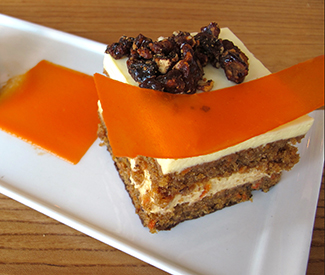 Like a cockroach emerging from the apocalypse… Wait, that isn’t right. Like a chicken rising from the cigarette ashes…oh, nevermind. Anyway, legendarily grungy Sixth Street stalwart Tu Lan (8 6th St., SF.) has reopened after being closed for more than a year by the health department for numerous violations. (Yes, grody ones). You’ll hardly recognize the joint: It has a shiny new kitchen — and a whole new look, too, both inside and out. Most important: the staff has been trained in proper food handling procedures, how novel. The imperial rolls, however, hopefully remain unchanged and tasty as ever. But they’re 25 cents more, like everything else on the menu—they had to pay for all that new stainless steel somehow.

Pierogi are definitely something in short supply in our fair city. Well, until now, because Stuffed (2788 Mission, SF.) has opened in the Mission, and it’s offering both traditional Midwestern pierogi, sporting a potato filling of farmer cheese and cheddar, and new-school styles including smoked salmon, mushroom with spinach dough, blue and jack cheese tossed in Buffalo sauce. And then there’s the bacon-cheddar number, which sounds like your dream baked potato: bacon and mashed potato filling with cheddar cheese, served with sour cream, sautéed onions, and your choice of coleslaw or sauerkraut. Pair ’em with some Midwestern beers — there are some local brews too — and you’re set. Unless you forgot to bring cash. Don’t do that. (Closed Mondays.)

Just in case you were planning to head to Canteen (817 Sutter, SF.) for its Parker House rolls, or Luella (1896 Hyde, SF.) for the Coca-Cola braised pork shoulder, or Cedar Hill (3242 Scott, SF.) for barbecue, consider this your public service announcement that all three joints are now closed. But there’s good news. The folks behind the Fillmore’s Fat Angel (partnering with some cats from Michael Mina) are opening a new place called Stones Throw in Luella’s space later this year. Meanwhile, chef Dennis Leary of Canteen is busy working on his two new projects (Caffe Terminus at 10 California and the Trocadero Club in the former RJ’s on Geary). And the Cedar Hill owners are still running their two Rib Whip trucks, so you can still get your hands dirty with their Midwest barbecue.

Want to get up close and personal with one of the most respected authorities on Italian cooking? Come to Omnivore Books (3885 Cesar Chavez, SF. www.omnivorebooks.com) on Monday, Sept. 16th (from 6:30pm–7:30pm) for a free talk with Giuliano Bugialli as he discusses his book, Maremma: The Wild West of Tuscany. You’ll learn about the food of this region from one of the world’s leading authorities on Italian cooking. He’s taught thousands of students about authentic Italian ingredients, techniques, and methods since 1973 — so yeah, he knows his stuff. You can return the next evening, Tuesday, Sept. 17th, 6:30pm–7:30pm, to listen to Joe Yonan talk about his book, Eat Your Vegetables: Bold Recipes for the Single Cook. His book is full of vegetarian and vegan recipes for singles, or for lone vegetarians in meat-eating households (nope, that doesn’t sound easy).

Mmmm, carrot cake. It’s definitely one way to eat your vegetables. Out in the Dogpatch is Michael and Jacky Recchiuti’s Chocolate Lab (801 22nd St., SF. www.chocolatelabsf.com), a stylish little café that is well-suited for lunch, or brunch, or an afternoon snack, or dinner for that matter. Yeah, it just works. And while Recchiuti is known for his local chocolate empire, the carrot cake is definitely worth checking out. It’s not too sweet or dense, and for a twist, he adds a layer of milk chocolate mousse made with crème fraîche for a little tangy touch, plus there’s a white chocolate frosting. Carrot cake for chocolate lovers!