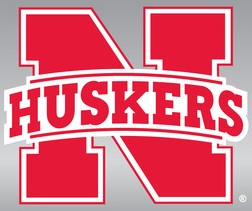 Well, today, first game day at the University of Nebraska/Lincoln, I got out my red Nebraska cap and my white sweat socks with a red trim and the former Jean Dibble got out her red Nebraska sweater.

Today is the opening game of the season for the Nebraska Cornhuskers and we planned to watch the game. We faithfully watched every game last year and we planned to do so again this year. Jean and I are both graduates of the University of Nebraska. I was editor for a semester in the spring of 1956  of the Daily Nebraskan (known affectionately in my day as the Rag) and we plan to return in October for a grand reunion of the Rag staffs through the years.  Our grandson Nicholas Perez of Santa Barbara is a sophomore mechanical engineering student and has season tickets. And so we became even more faithful fans.

Normally, the opening game is a breeze for the Cornhuskers, but the opening game of the 1955 season, when I was the sports editor of the Rag, was a classic Nebraska loss in a state where NU football losses aren’t tolerated. Nebraska played terribly and lost, 6-0, to the University of Hawaii at Memorial Stadium in a game so humiliating that the Cornhuskers never got closer than Hawaii’s 13-yard line.

Immediately, the Nebraska press and the sports writers across the state  erupted virtually in unison and started pounding on  Bill Glassford, the coach, and kept piling  on with increasing ferocity  for the rest of the season.

The most virulent were the local sports editors, Dick Becker of the Lincoln Journal and Don Bryant of the Lincoln Star, operating with the power and safety of a joint operating agreement (JOA). (The JOA monopoly  was soon to be declared illegal with President Kennedy’s famous federal antitrust case against the JOA papers in Tucson, Arizona. The U.S. Supreme Court ruled  that the JOA was a  prima facie violation of antitrust law because it pooled profits, fixed prices, and shared markets. The JOA publishers, including the Lee chain that owned the morning  Star and the Seacrest family that then owned the afternoon Journal, lobbied Congress and President Nixon to legalize retroactively  JOAs with special interest legislation.)

I called Becker and Bryant  the Bobbsey Twins of the Journal-Star, countered them whack for whack and defended Glassford with facts and gusto .After all, he was a solid coach with a decent  5-5 season, won second place in the tough Big Seven conference and went on to play in the Orange Bowl.  I was surprised to find that I was about the only sports writer in the state to support Glassford.

Sadly, this was Glassford’s last season and  the end of his coaching career. However, a couple of coaches later, along came Bob Devaney and Tom Osborne and national champsionships and five decades of sold out crowds in Memorial Stadium. Later, I felt that I had been the precursor to Wes “Scoop” Nisker, a Nebraska native from Norfolk, and his famous motto he laid out as a newsman on KSAN radio in San Francsico during the during the dark days of Nixon and Vietnam. “If you don’t like the news,” Scoop would say, “go out and make some of your own.” Perhaps, I later mused,  this unlikely game in this unlikely place was the unlikely start of my career in fighting for the underdog and promoting  alternative journalism.with the Bay Guardian.

But I digress. Updating my research from last year, this is how to watch today’s game.

Nebraska is now a member of the Big Ten conference and so its games are shown on the Big Ten Network (BTN, cable station 403 in San Francisco.) Today’s game will be broadcast at 7 p.m. Nebraska time, 5 p.m. California time.

And then there’s the Nebraska bar in San Francisco, aptly called Final Final, the lively neighborhood sports bar at 2990 Baker Street, across from the Presidio. The bar is real Nebraska. It is owned by Arnie Prien, who comes from Lyons, Nebraska, and graduated from the university in 1964.  He has been running Final Final for the past 36 years and loyally broadcasts Nebraska football games every Saturday on his premier giant screen.

The NU faithful, he told me,  come from all over the Bay Area to see the games and enjoy Husker camaraderie.   (I have always been leery of the alleged Herb Caen rule: never check the item, you might lose it.) So I called Final Final this morning to check. The game, I am happy to report, is on the big screen today at 5 p.m and the suggestion is to come an hour or so early for a seat and first shot at the free pop corn and inexpensive beer.

Final Final got its name from the days when the soldiers got their final drink before heading back to their barracks at the Presidio after a night on the town. This is most ironic, since the Lincolnites of my era suffered under strict drinking laws,  which meant that one could not get a hard drink nor cocktail in a public bar but only in the sanctuary of the private University Club in the Stuart Building. And then only if one kept a bottle in a private locker.

There is no place like Nebraska. Especially in San Francisco. Go Big Red. b3

P.S. The NU alumni site lists three other “watch sites” in the Bay Area.  Jack’s Brewing Company in Fremont. Legends and Heroes in Concord. And Knuckles Sports Bar in Monterey.

(Bruce B. Brugmann, who signs his blogs and emails b3,  writes and edits the bruce blog on the Bay Guardian website at sfbg.com. He is the editor at large of the Bay Guardian and the former editor and co-founder and co-publisher with his wife Jean Dibble, l966-2013. He can be reached at bruce@sfbg.com.)