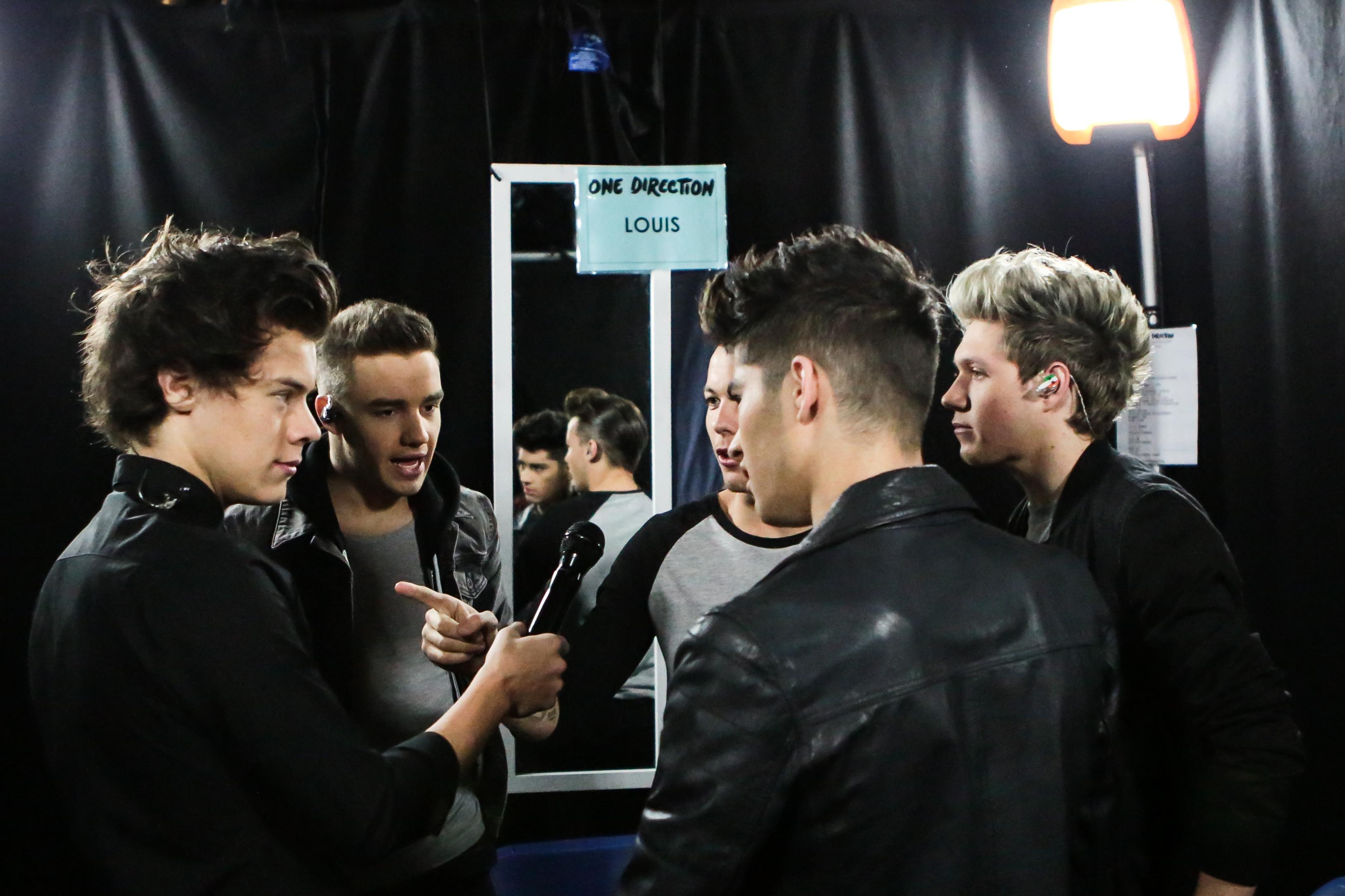 Click this way for my Fall Film Preview, presented as part of this weeks Fall Arts spectacular. With bonus photo of Bradley Cooper’s Brady perm!

Read on for this week’s openings, including one of the best indie films of the year, the latest from Wong Kar-Wai, and, uh…the One Direction movie.

Drinking Buddies Mumblecore grows up in this latest from actor-writer-director Joe Swanberg (currently starring in You’re Next), about brewery co-workers Kate (Olivia Wilde) and Luke (Jake Johnson), BFFs who’d obviously be the perfect couple if they weren’t already hooked up with significant others. At least, they are at the start of Drinking Buddies; the tension between them grows ever-more loaded when the messy, chaotic Kate is dumped by older boyfriend Chris (Ron Livingston) — a pairing we know is bound to fail when we spot him chiding her for neglecting to use a coaster. Luke’s long-term coupling with the slightly younger but way-more-mature Jill (Anna Kendrick) is more complicated; all signs indicate how lucky he is to have her. But the fact that they can only meander around marriage talk indicates that Luke isn’t ready to settle down — and though Jill may not realize it, Luke’s feelings for Kate are a big reason why. Working from a script outline but largely improvising all dialogue, Swanberg’s actors rise to the challenge, conveying the intricate shades of modern relationships. Their characters aren’t always likable, but they’re always believable. Also, fair warning: this movie will make you want to drink many, many beers. (1:30) Roxie. (Cheryl Eddy)

Getaway Ethan Hawke and Selena Gomez team up in a high-speed, high-stakes race to save Hawke’s kidnapped wife. Jon Voight co-stars as “Mysterious Voice,” so there’s that. (1:29)

The Grandmaster The Grandmaster is dramatic auteur Wong Kar-Wai’s take on the life of kung-fu legend Ip Man — famously Bruce Lee’s teacher, and already the subject of a series  of Donnie Yen actioners. This episodic treatment is punctuated by great fights and great tragedies, depicting Ip’s life and the Second Sino-Japanese War in broad strokes of martial arts tradition and personal conviction. Wong’s angsty, hyper stylized visuals lend an unusual focus to the Yuen Woo-Ping-choreographed fight scenes, but a listless lack of narrative momentum prevents the dramatic segments from being truly engaging. Abrupt editing in this shorter American cut suggests some connective tissue may be missing from certain sequences. Tony Leung’s performance is quietly powerful, but also a familiar caricature from other Wong films; this time, instead of a frustrated writer, he is a frustrated martial artist. Ziyi Zhang’s turn as the driven, devastated child of the Northern Chinese Grandmaster provides a worthy counterpoint. Another Wong cliché: the two end up sadly reminiscing in dark bars, far from the rhythm and poetry of their martial pursuits. (1:48) (Sam Stander)

Instructions Not Included Mexican superstar Eugenio Derbez stars in this comedy about a ladies’ man who finds redemption when he’s suddenly tasked with being a single parent to his young daughter. (1:55)

One Direction: This is Us Take them home? The girls shrieking at the opening minutes of One Direction: This Is Us are certainly raring to — though by the closing credits, they might feel as let down as a Zayn Malik fanatic who was convinced that he was definitely future husband material. Purporting to show us the real 1D, in 3D, no less, This Is Us instead vacillates like a boy band in search of critical credibility, playing at an “authorized” look behind the scenes while really preferring the safety of choreographed onstage moves by the self-confessed worst dancers in pop. So we get endless shots of Malik, Niall Horan, Liam Payne, Harry Styles, and Louis Tomlinson horsing around, hiding in trash bins, punking the road crew, jetting around the world, and accepting the adulation of innumerable screaming girls outside — interspersed with concert footage of the lads pouring their all into the poised and polished pop that has made them the greatest success story to come out of The X Factor. Too bad the music — including “What Makes You Beautiful” and “Live While We’re Young” — will bore anyone who’s not already a fan, while the 1D members’ well-filtered, featureless, and thoroughly innocuous on-screen personalities do little to dispel those yawns. Director Morgan Spurlock (2004’s Super Size Me) adds just a dollop of his own personality, in the way he fixates on the tearful fan response: he trots out an expert to talk about the chemical reaction coursing through the excitable listener’s system, and uses bits of animation to slightly puff up the boy’s live show. But generally as a co-producer, along with 1D mastermind Simon Cowell, Spurlock goes along with the pop whitewashing, sidestepping the touchy, newsy paths this biopic could have sallied down — for instance, Malik’s thoughts on being the only Muslim member of the biggest boy band in the world — and instead doing his best undermine that also-oh-so-hyped 3D format and make One Direction as tidily one dimensional as possible. (1:32) (Kimberly Chun)

The Patience Stone “You’re the one that’s wounded, yet I’m the one that’s suffering,” complains the good Afghan wife in this theatrical yet charged adaptation of Atiq Rahimi’s best-selling novel, directed by the Kabul native himself. As The Patience Stone opens, a beautiful, nameless young woman (Golshifteh Farahani) is fighting to not only keep alive her comatose husband, a onetime Jihadist with a bullet lodged in his neck, but also simply survive on her own with little money and two small daughters and a war going off all around her. In a surprising turn, her once-heedless husband becomes her solace — her silent confidante and her so-called patience stone — as she talks about her fears, secrets, memories, and desires, the latter sparked by a meeting with a young soldier. Despite the mostly stagy treatment of the action, mainly isolated to a single room or house (although the guerilla-shot scenes on Kabul streets are rife with a feeling of real jeopardy), The Patience Stone achieves lift-off, thanks to the power of a once-silenced woman’s story and a heart-rending performance by Farahani, once a star and now banned in her native Iran. (1:42) (Kimberly Chun)

Short Term 12 A favorite at multiple 2013 festivals (particularly SXSW, where it won multiple awards), Short Term 12 proves worthy of the hype, offering a gripping look at twentysomethings (led by Brie Larson, in a moving yet unshowy performance) who work with at-risk teens housed in a foster-care facility, where they’re cared for by a system that doesn’t always act with their best interests in mind. Though she’s a master of conflict resolution and tough love when it comes to her young chargers, Grace (Larson) hasn’t overcome her deeply troubled past, to the frustration of her devoted boyfriend and co-worker (John Gallagher, Jr.). The crazy everyday drama — kids mouthing off, attempting escape, etc. — is manageable enough, but two cases cut deep: Marcus (Keith Stanfield), an aspiring musician who grows increasingly anxious as his 18th birthday, when he’ll age out of foster care, approaches; and 16-year-old Jayden (Kaitlyn Dever), whose sullen attitude masks a dark home life that echoes Grace’s own experiences. Expanding his acclaimed 2008 short of the same name, writer-director Destin Daniel Cretton’s wrenchingly realistic tale achieves levels of emotional honesty not often captured by narrative cinema. He joins Fruitvale Station director Ryan Coogler as one of the year’s most exciting indie discoveries. (1:36) (Cheryl Eddy)

Thérèse Both Emma Bovary and Simone de Beauvoir would undoubtedly relate to this increasingly bored and twisted French woman of privilege stuck in the sticks in the ’20s, as rendered by novelist Francois Mauriac and compellingly translated to the screen by the late director Claude Miller. Forbiddingly cerebral and bookish yet also strangely passive and affectless, Thérèse (Audrey Tautou) looks like she has it all from a distance — she’s married to her best friend’s coarse, hunting-obsessed brother (Gilles Lellouche) though envious of her chum’s affair with a handsome and free-thinking Jewish student. Turns out she’s as trapped and close to death as the birds her spouse snares in their forest, and the suffocatingly provincial ways of family she’s married into lead her to undertake a dire course of action. Lellouche adds nuance to his rich lunk, but you can’t tear your eyes from Tautou. Turning her pinched frown right side up and hardening those unblinking button eyes, she plays well against type as a well-heeled, sleepwalking, possibly sociopathic sour grape, effectively conveying the mute unhappiness of a too-well-bred woman born too early and too blinkered to understand that she’s desperate for a new century’s freedoms. (1:50) (Kimberly Chun)